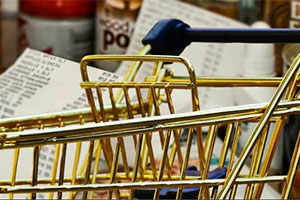 For years, research has told us that income taxes are worse for economic growth than GST.

Governments still, however, raise more money from taxes on personal income than from indirect taxes such as GST.

A new study from Motu Economic and Public Policy Research helps explain why governments may follow this lower growth path.

“For years GDP has been the measure used by most economists for measuring how well a country’s economy is faring,” said Arthur Grimes, Senior Fellow at Motu Economic and Public Policy Research Trust. “Now however, there is another useful option for tracking different policy options – subjective wellbeing – or how satisfied people feel with their lives.”

Dr Grimes and three co-authors have just released a paper reporting on more than 30 years of fiscal data from 35 countries, cross-referenced with subjective wellbeing scores from more than 170,000 people. The research explores how people react to various fiscal decisions.

“We found that ‘distortionary’ taxes, like income tax are associated with better subjective wellbeing outcomes than ‘non-distortionary’ taxes such as GST, particularly for the poor,” said Dr Grimes. “This was the case even after controlling for the effects of individual personal circumstances and country background.”

“For example, if a country ranked 15th in the OECD for subjective wellbeing adjusted 10 percent of its GDP by reducing GST and increasing income tax, its ranking would rise to around 5th. In fact, changing the country’s fiscal makeup like this seems to be even more effective than getting married in making people happy,” said Dr Grimes.

In contrast, social welfare spending has most benefit for the middle class and least benefit for poorer people. This possibly reflects that many such expenditures (such as support for tertiary students) in fact benefit the middle-class the most, a phenomenon known as ‘middle-class capture’. 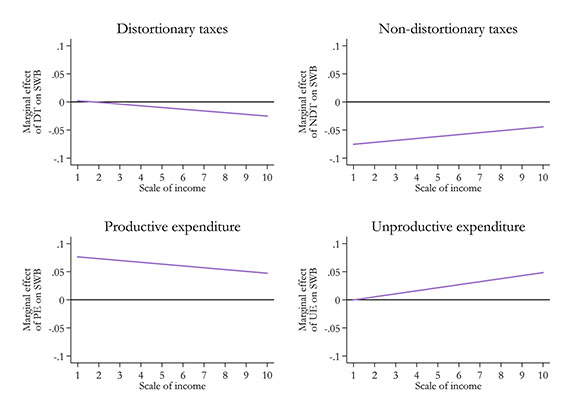 URLs to support this statement please? "For years, research has told us that income taxes are worse for economic growth than GST." Now neo-cons, right wing think tanks, sure but I dont class that as "research"

GST would be a regressive flat tax, so my first take is this is in-correct, hence I'd like some evidence please.

It does seem a considerable leap of faith to believe GST helps growth, but income taxes lower it. Simplistically if an economy were supply constrained, of either labour or to a lesser extent capital, then maybe lowering income taxes and increasing GST would help boost supply and the economy. If though economies were demand constrained relative to supply- as the world is currently- then you would expect the opposite to be true.
The world currently probably has the biggest amount of spare capacity in commodities ever seen, and zero inflation, zero interest rates suggest no constraints on supply of capital. Raising GST type taxes globally would be stupid in such situations- as the Japanese proved recently, even if doing so may have helped their own economy in terms of their QE grabbing trillions of the world's wealth.

The world currently probably has the biggest amount of spare capacity in commodities ever seen, and zero inflation, zero interest rates suggest no constraints on supply of capital.

Are you sure about that beyond the world of collateralised residential property mortgages?

The basis for the ongoing economic paradigm shift that seems to be manifesting in a slow, lingering slowdown (that is now more than year into contraction) in the US and global economies can be nothing but the withdrawal of banks from the necessities of the credit-based reserve currency. Read more

I confess to not fully understanding all the jargon and tools referenced in your linked report, and separately suspect that on many things, in particular the negative effects of zero interest rates, that in fact you and I agree.
To the extent that banks are constraining the supply of funds for businesses (as noted in your report), or that businesses are about to default on massive loans already taken out, seems far more to do with those businesses having models in the current oversupply situation, where they have no chance of making money or paying loans back. Any constraints are not because there is somehow a shortage of money.
No sensible bank would currently loan lots more to a steel company, or an iron ore company, or an oil company, or even a dairy farmer, even though the banks can easily enough print money to do so.
With global demand and supply so out of whack, very few businesses in basic commodities can be making much, even at super low interest rates.
It is demand that needs to be lifted, or some supply to be made redundant, before commercial loans will make sense again. Raising GST would not help the situation.

A few quick calculations show that we could do away with income tax and have 60% GST instead. All this would do is push wealth upwards and heavily punish those on low incomes. Those in higher tax brackets with high incomes benefit more from an economy than the poor, they should be more tax as they are benefiting from the entire economy.

Those at the bottom need to consume and pay GST, those that are well off or very wealthy will invest more and not pay GST. This article is just more neoliberal propaganda dressed up as economics.

On a high income it's possible to live quite well while paying taxes at the highest rate. I'm not really feeling the pressure for taxes to be reduced, all that would happen is I would invest more while the poorest 50% of the population suffers. That doesn't seem appropriate to me.

Defence isnt a productive undertaking to me, it is a cost ie more like welfare / social security. So the police and justice system would generally also fall into this category. ie they prevent or reduce loss not produce a benefit like say education.

Read it and well, yeah whatever ie it doesnt jump out at me and say what a ground breaking and useful piece or opinion.

yeah... I agree...
Its' a leap of faith to directly connect forms of taxation with well being...

Maybe they should compare the sex lives of economists with both taxation and well being, in the different countries........... at least it would be interesting reading...

Oh I don't know about that - all those rich people who don't pay tax feel pretty good about themselves.... Thus the relationship is inverse, the less tax we pay the better we feel.

Since growth is the problem, not the answer, the only thing that makes any sense at this late stage in the game is heavy taxation of non-essentials.

Heavily tax things people don't actually need and which make them mentally and physically lazy and sick -just look at the zombie-like state of most city dwellers and look at waistlines:

'Governments need to prepare for the jump in medical costs that accompany unhealthy weight and focus on prevention now to avoid higher costs in the future, said Bill Dietz, director of the Sumner M. Redstone Global Center for Prevention and Wellness at George Washington University. “They should be as nervous as a cat on a hot tin roof about the tsunami of diabetes that’s coming their way,” Dietz said. “The cost of this rise in the prevalence of obesity is going to be staggering.”

Heavily taxing non-essentials and overconsumption is the very opposite of the ideologically-driven policies promoted by governments since the 1980s, and will never be implemented as long as politicians promote consumer-yourself-to death and consumer-the-planet-to-death policies...... the other victim of all this growth-driven madness being the geochemical systems that make life-as-we-know-it possible.

As was commented recently on this website, the world has gone insane -well, the western world has- and insane people are not capable of making rational decisions.

An argument by a Sheep who has never experienced a Wolf Pack....

"defence"? that is plain nonsense. If anything the wealthy have more to lose if we were invaded, troops are also used to suppress ppl.