Rodney Dickens says now that tourism is vying with dairying as our number one export earner, it is time to scrutinise its economic impact in more depth

Rodney Dickens says now that tourism is vying with dairying as our number one export earner, it is time to scrutinise its economic impact in more depth 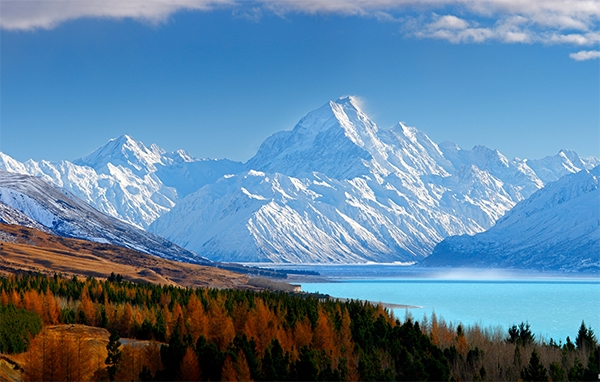 Tourism competes with dairying as New Zealand's largest export earner making it an important industry when assessing economic growth prospects among other things.

This Raving looks at tourism from several perspectives including an overview of what is driving the latest boom in foreign visitor arrivals, introducing the concept of net tourism that paints a different picture of the impact of the tourism industry on economic growth and a look at economic multiplier effects set in motion by the latest tourism boom.

Drivers of the latest boom in foreign visitor arrival numbers 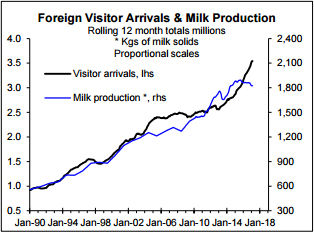 Tourism has been a strong growth industry over many years based on the increase in the rolling 12 month numbers of foreign visitor arrivals that includes tourists and other short-term visitors like business travellers (black line, adjacent chart). It has also been a quite cyclical story with periods of strong growth like that experienced since 2014, periods of little growth like the experience between 2006 and 2013 and even occasional periods when visitor arrival numbers fall like the fall caused by the 1998 East Asian crisis.

Statistics NZ only provides a breakdown of visitor arrival numbers for eight major source markets with the annual numbers for seven of these plus all other source markets shown in the two charts below. The charts reveal the latest boom has been driven by increased numbers from China, Australia, the US and all other source markets although the Chinese numbers have grown little in the last year. The rest includes some of the strongly growing Asian markets like Vietnam and some of the traditional markets from which growth is likely to be relatively weak (e.g. some of the other European markets). 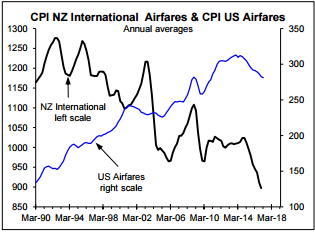 This Raving isn't designed to provide detailed analysis of the drivers of foreign visitor arrival numbers as opposed to some general insights. Factors behind the latest tourism boom that has occurred despite a generally high NZD in recent years include growing per capita incomes in parts of Asia resulting in increased propensity to travel and associated with this has been many new routes being opened up between NZ and Asia and falling airfares that recently will have been driven at least partly by lower fuel costs. The adjacent chart shows the CPI components for NZ international airfares and total US airfares that will be dominated by domestic fares with both having fallen significantly in the last couple of years. 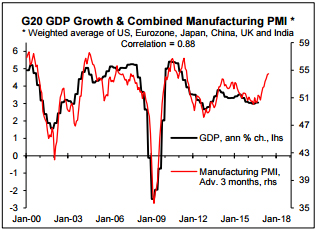 However, the oil price has increased moderately since the recent low in October 2016 so the boost to tourist numbers from falling travel costs may not last too much longer.

More detailed research I have done in the past on the drivers of global tourism show that it is impacted significantly by economic cycles. In that context, the adjacent chart that uses a weighted average of manufacturing purchasing manager surveys for the major economies as a leading indicator of GDP growth for the G20 major economies suggests that global tourism prospects should be in the process of improving. G20/global economic growth appears to be in the process of improving quite a bit based on the weighted average PMI survey. GDP growth won't necessarily improve as much as signalled by the combined manufacturing PMI survey based on the experience when G20/global growth last improved in 2013.

Past experience suggests that the strong growth in recent years will not continue indefinitely. Exactly what contributes to the next significant slowdown in growth and when it occurs I don't know. But on the other hand it seems reasonable to assume that until virtual tourism takes over from actual tourism, international tourism will remain a reasonably strong growth industry possibly aided by new generation planes that contribute to significantly faster travel times.

Net tourism paints quite a different picture at times

Recently, NZ residents holidaying overseas have been growing faster than foreign visitor arrivals meaning slightly lower net tourism. If this pattern continues it means that international tourism will go from providing a reasonably significant boost to growth in consumer spending to providing no boost. Based on past experience at some stage over the next few years there will be another major cyclical fall in net tourism numbers while it is possible the start of that fall may already be underway. 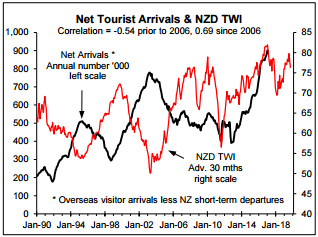 Some of the economic multiplier effects of the latest tourism boom 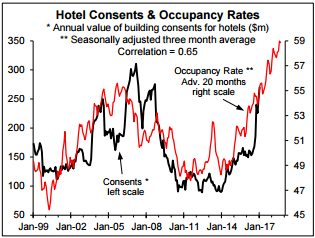 While the boost to consumer spending from net tourism may be about to end some of the positive economic multiplier effects from the latest boom in tourism that will include some upside in domestic tourism will remain at work over the next couple of years. The adjacent chart shows the NZ occupancy rate for commercial accommodation to be a useful leading indicator for consents for hotels and other short-term accommodation. The tourism boom has driven occupancy rates to the highest level on record and this is somewhat belatedly flow through to increased consents for hotels etc. It isn't a perfect relationship but the highest correlation at a moderately positive 0.65 is with the occupancy rate leading by 20 months with this reflected in the chart by the red occupancy rate line being advanced or shifted into the future by 20 months. Similarly, in response to increased demand a range of tourist operators will be looking to increase capacity including staff numbers which will have a positive flow on impact on the economy including for consumer spending. This will be a small factor in the corporate tax take running ahead of what Treasury has been forecasting, which will help fuel increased government spending.

Even if the upturn in net tourism has ended, the positive economic multiplier effects set in motion by the latest tourism boom will make a positive contribution to economic growth for some time. However, tourism is a highly cyclical industry when we look at the likes of the occupancy rate and consents for hotels etc. At some stage it will be time to start focusing on the next cyclical downturn that will include negative economic multiplier effects including for the likes of hotel construction and tourism-related employment as will be covered in our pay-to view, monthly economic reports.

Rodney
An impressive Tourism boom , an immigration boom , a construction boom , why did the NZ economy only grow by .4 % in the December quarter ?
Are you sure this country can get wealthy on tourism. ?
Greece and Fiji sought of come to mind

Good point and shows how nonsensical GDP is.
As a fuudy old duddy I say our only wealth is the intellect of our people.

Interesting to consider both sectors from an environmental viewpoint.
To date both have increased in tandem, but can we continue to increase the rate at which we pollute our rivers and aquifers and still have an environment that will attract tourists. The environmental consequences of this pollution will lag it's causes so we may have already past the point where long term effects of the pollution starts impacting on tourism. Tourism it'self is also having a negative effect on our environment, particularly our living space within it.
In both cases, the smartest thing that we can do is to increase our value added component and move up the value chain. More high value niches and a lot less volume of bulk commodities.

Left New Zealand for Canada in 1970 halfway through an engineering degree which was completed in Canada. I made a point of seeing most of the country before I left because I never knew if I would be back. The last year in NZ was working at West Arm at the original Manapouri project so did a lot of South Island before a departed. I feel fortunate because I saw rural NZ before the tourist boom, it was a very beautiful country. I was home about 3 years ago and it had a well-worn look about. The tourist boom will end one day and NZ will be left with the landscape full of rotting accommodation that no one wants. Basically, it will be like cleaning up after a wild party after they've trashed the place. Tourism is fine but not in the numbers that are arriving in NZ.

Tourism has always been an imortant earner, especially in rural NZ. We want people that visit, spend money, stay in accomodation, eat at restaurants etc. Those that travel and stay in cheap jap import vans, avoid camp grounds, spend as little as possible, and poo everywhere they go are more like locusts than tourists (pest).