Siah Hwee Ang sees the growing aviation cooperation between China and Russia as important for both countries, one that will transcend their regular squabbles

Siah Hwee Ang sees the growing aviation cooperation between China and Russia as important for both countries, one that will transcend their regular squabbles 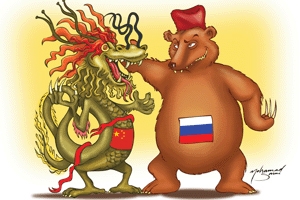 Russia is one of the fourteen countries that share a border with China.

As with China’s other neighbours, Russia’s relationship with China has had its ups and downs. Tensions between the two are common.

One thing is for sure though: China’s relationship with Russia is watched closely by Washington.

The colossal partnership between Russia and China has the potential to be seen as a great union, or as a possible threat.

Last week, China and Russia set up a 50-50 joint venture in Shanghai to build wide-body airplanes.

The new airplane is designed to compete in the global market alongside Boeing Co. and Airbus Group SE.

Research and development, and all operations will be conducted in Shanghai.

Each year, Chinese airlines spend a lot of money buying airplanes from Boeing and Airbus to feed the country’s booming growth in international flights.

Meanwhile, China continues to build more airports and establish new airlines, with both domestic and foreign airlines increasing their flight frequency in and out of the country.

The waitlist and associated waiting time for the delivery of airplanes from Boeing and Airbus continues to be long. Their websites show a backlog of around 7,000 airplanes each.

It is evident that a large part of the plan is to reduce some of the supply-side limitations, allowing the aviation industry to grow faster.

But at the same time, COMAC (Commercial Aircraft Corporation of China) the Chinese entity involved in the joint venture has had little experience in the aircraft business.

So, China is being sensible in not going it alone, and probably doesn’t have the luxury of spending time on development.

A partnership with another organisation, United Aircraft Corp, allows access to advanced technologies from the Russian side.

Perhaps this can be put down to having limited options as Boeing and Airbus cover off the industry in the US and Europe, respectively.

But a partnership between one current and one future powerhouse in technology can raise eyebrows.

The matter of fact is that the development of the new wide-body jet will take the better part of eight years. The maiden flight is planned for 2025.

It is quite perplexing that the timeline is so long, given that a lot of technology is already available thanks to Boeing and Airbus’ extended presence in the market.

A possible explanation is that the venture could be aiming for an ambitious state-of-the-art type jet, and not one that simply replicates the models of the current players.

The first jets will be delivered in 2028 and seek to take away a 10 per cent market share from the equivalent Boeing (B787) and Airbus (A350) models.

That target is an ambitious one.

So, the airplane industry needs to keep an eye out for what could potentially be strong competition.

With this new addition, the aviation industry will soon see faster growth, a greater frequency of flights and even lower airplane ticket prices.

However, what might catch attention for now is that China and Russia are working more closely in the air space. A partnership in such a strategic industry signals both countries’ intentions to align more closely for mutual benefit.

Will it transcend their centuries old squabbles starting with their common border in the 1600's right up to the Chinese invasion of Vietnam in 1979?

Its my understanding they dont trust each other and likely they never will .

I also detect a hint of nationalistic jealousy between the two .

Given the safety record of Aeroflot you wouldn't get me in a Russian made airplane,so lets hope the Chinese aircraft that they build will have a better safety record than some of their cars eg Great Wall.

Aeroflot by the way is one of the safest airlines in the past 20 years. In 70s while some of your pre-ancestors traveled on the sheep those guys carried 100 million passengers per year. http://www.telegraph.co.uk/travel/news/Aeroflot-from-worlds-deadliest-a…

Of course you are correct,i should have said Russian built planes,because Aeroflot are now made up of mainly Western built planes.

Russian aircraft ( Antonov is actually based in Ukraine ), helicopters and rocket engines are all some of the best engineered, most sophisticated and safest there is. One should have no concerns of ever flying in one.

The RD-180 is the backbone of current US satellite launch capability with a brilliant record of successes.

Any analysis of Russian aircraft safety has to consider their operating conditions - some of the harshest anywhere.