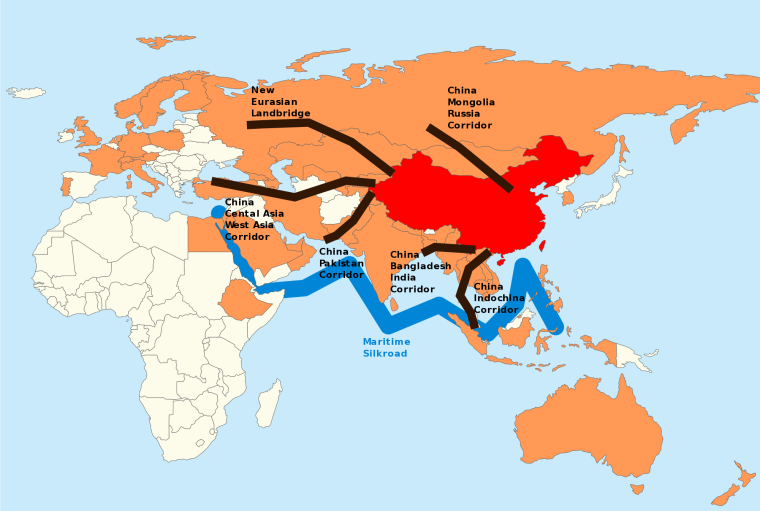 The One Belt One Road Initiative spearheaded by China is starting to draw attention in New Zealand.

In part, this has been triggered by New Zealand signing the Memorandum of Understanding with China to work on ways to cooperate in the initiative, known as “OBOR” here and “BRI” in China.

Clearly, the signing of the MOU means that New Zealand needs to deepen its understanding of the OBOR.

So, how much do we know about OBOR?

Question: What does “One Belt” and “One Road” refer to?
Answer: The Belt refers to the Silk Road Economic Belt that stretches across Central China, West Asia, the Middle East and all the way to Western Europe. The Road refers to the 21st Century Maritime Silk Road that links China’s eastern coast to Southeast Asia, then passes the southernmost tip of India and East Africa, before making its way to the Persian Gulf and the Red Sea.

Question: What are the goals of the OBOR?
Answer: The five major goals of the Belt and Road initiative are: policy co-ordination, facilities connectivity, unimpeded trade, financial integration, and people-to-people bonds.

When it was introduced, the OBOR was basically a white piece of paper with ‘an invitation to play’.

Despite initiating the OBOR, China has consciously avoided giving the impression that it is taking a leading role.

A China-led consortium would not have been able to get enough traction in an international arena that still feels uneasy about the Asian country’s rise to the global economic scene.

At the same time, the non-contractual approach is one that confuses most of the world, not just the more advanced economies.

So, the pick-up has been slow initially.

It is estimated that countries along the Belt and Road will create an ‘economic cooperation area’, accounting for 64.2% of the world’s population, 37.3% of global GDP, and 31.4% of household consumption.

The number of countries involved in OBOR has since risen from the initial set of around 60 countries. Projects with a combined worth of more than US$ 1 trillion have been earmarked for the initiative.

The Silk Road Fund, the Asian Infrastructure Investment Bank, and the BRICS New Development Bank are new funding mechanisms that were set up to support investments along the OBOR.

Developments have been going well along the Silk Road Economic Belt since 2014. There is now more trade between China and central Asia along the One Belt.

Early scepticism around the OBOR’s functions in the Southeast Asian region have resulted in the nations being slow to pick up on the One Road.

But there are signs of Southeast Asia nations working more closely with China to mutually benefit from the OBOR.

To make the One Road work, China will have to gain the trust of its Southeast Asian collaborators.

Major construction projects to build ports in Pakistan, Sri Lanka, Kazakhstan, Cambodia and Indonesia, as well as railway constructions linking China to Laos, Thailand, Myanmar and Tajikistan have been underway for the last couple of years.

In order for it all to make sense, two aspects of OBOR need to be made clear.

First: trade does not happen in space.

We are often too narrowly focused on trade numbers and lose sights of logistics, a necessary condition for trade.

Bad logistics can become a hindrance to trade.

In fact, the logistics world has not been doing too well, in particular with shipping.

It is infrastructural development that will enhance the logistics that OBOR seeks to contribute to.

This leads to the second point.

Any aspect of enabling these can be classified as a OBOR activity.

It is not a myth, not is it unachievable. Indeed, in many ways a lot of companies are flourishing in the business of connecting, while others seek better connectivity for access to markets.

OBOR brings all of this, on a wider scale.

Dear O Dear, do you get paid to write this Siah? Seriously, is this the work of highly placed professor at one of our major universities; a loosely connected pasting of propaganda. No discussion on implications for New Zealand (it doesn't look to have anything to do with us) no mention of the horrendous debts being placed on a string of poor countries or the plan for construction work to be carried out by Chinese firms but paid for by the proposed vassal states or what happens to their sovereignty when things don't work out.
Don't get me wrong, it could be a great benefit but Interest.co. and Victoria University should be deeply ashamed to have anything to do with this............!

David, what you state above looks like a real rubbish. You simply deny what you dont like to see. I read a lot of UK-USA anti soviet /anti chineese propaganda in nz. And what? Looks like most journalists just copy pasting news from uk and occasionally from usa sources. No analysis, no alternative views. It feels like we are still a colony

I'm not sure what your point is. That we should accept junk journalism and blatant propaganda because there's worse stuff out there?
My concerns are more with the quality and depth of the article. I won't deny I, and many others, have some very real concerns with the way this project is being run, in particular regarding the involvement and commitments of the countries involved. None of these issues are even mentioned never mind discussed as you would expect. The title claims to tell us "everything you need to know about China's ambitious One Belt One Road Initiative"; it does nothing of the sort. It's rubbish. Goodness knows what the Victoria University Chancellor would think about having his institution associated with it.

David, a BIG thank you for saying what a majority of us feel.
Absolutely nothing but a propaganda

I think this is article is highly biased. This OBOR will benifit to China not the other countries. China will control them easily. Also it is passing through Disputed land of India. China stop bullying small countries first. It must stop making artificial Ireland in Sea and putting theit military. Please vacate South China sea then we will find your intentions.

say this to your american daddy first :-)

Good long term planning by the Chinese - And a useful response to a future with 10 times our current world population and slaughtered environment. And genuinely why not have a high speed conveyer system (500kph container train ?) Shanghai - London.
But New Zealand would be better to stick to a future off that treadmill. Low population / high income, High tech with low impact on a pristine environment. (500 kph train fine)
I am pretty confident about which will be the most desired about 100 years from now.

Current global population circa 7bn and estimated to rise to around 9bn by mid century,before levelling off. Where did you get the ludicrous figure of some 70bn from? Errors of that magnitude rather detract from anything else you say.

America was the last power to have its turn at colonialism. Wouldn't be surprising to see China next in line to take up the mantel.

""China has consciously avoided giving the impression that it is taking a leading role"" !

"" China will have to gain the trust of its Southeast Asian collaborators"" the Spratlys, which Beijing calls the Nansha islands - All of the islands are claimed by China, Taiwan and Vietnam, while parts of them are claimed by the Philippines, Malaysia and Brunei.

Well better for them to concentrate on building their greater economy rather than globally asset stripping residential property and creating a false economy for the host city. There are far better investments out there.

'Collapse of the US economy'
I found this article short on detail and hard to understand.
What is the MOU?
What is the BRICS New Development Bank?
The countries involved needing infrastructure to be involved will get their funding from China?
I see this as another erosion Of the US dollar with the Yuan to step up as a gold based reserve currency.
Bring it on I say.
The US dollar as the world reserve currency is in its death throws. The one thing the so called 'axis of evil' had in common wasn't terrorism, but wanting to stop trading with the US dollar.
When using the US dollar as the currency of trade collapses so does the US economy.
The US dollar after WW2 was backed up by gold and became the currency of trade. The US printed way to much money and couldn't back it up so the dollar collapsed. Nixon did a brilliant deal with OPEC that all oil had to be purchased using US dollar and the Petro Dollar was born. Again the USA has abused their position printing money and in affect getting a free ride in world trade.
The 'War on Terror' has been a war to try and keep the US dollar as the reserve currency of trade with the countries stepping out of the system being the ones to be invaded or attacked.
I read this article and see China stepping up as the new global leader.

We have an election soon and not one party has questioned our involvement with the USA invasions. NZ needs to get on the right side of history and bring our troops home. They are stained with the blood of the subjugated nations and this is our shame. USA doesn't need our weapons, we are there to help legitimize their behavior.

"we are there to help legitimize their behavior."

Or we are there to help legitimize our behaviour. Indirectly we share the spoils.

@mrp be careful otherwise they will take over" your" NZ. Then you will need your big Grandpa US to save you. Lol