Martien Lubberink welcomes the RBNZ Dashboard bank disclosure regime, sees lessons for other countries & expects even greater disclose as the RBNZ beds it in

Martien Lubberink welcomes the RBNZ Dashboard bank disclosure regime, sees lessons for other countries & expects even greater disclose as the RBNZ beds it in 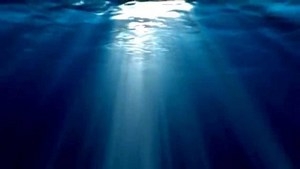 On the 21st of September, the Reserve Bank published the final decision on its Dashboard initiative for quarterly bank disclosures. For reasons unknown to me, the RBNZ did not post this decision on its news web-page, check here. However, it is a significant decision, one that should be welcomed.

The Dashboard approach is meant to improve the timeliness, accessibility and comparability of bank disclosures. It does so by offering detailed prudential bank data centrally, electronically, timely, and comprehensively. This dovetails with the RBNZ's supervision philosophy, which relies on market discipline more than many other prudential supervisors.

This is awesome: a central repository, offering relevant data in a timely fashion.

The RBNZ Dashboard will go live in May 2018, which is probably as early as reasonably possible.

The decision to go ahead with the Dashboard is significant, not only for New Zealand financial stability, but in particular for European bank regulators. They should take notice.

The current state of EU bank disclosures is silly and needs improving. European bank regulators are largely free to decide how banks disclose prudential information. This then leads to patchwork, an investor's nightmare. It amazes me that there is no need to sustain this patchwork: all European banks use standardised reporting systems (Finrep, Corep) to share private prudential information with their supervisors. That information should be made public, like the Reserve Bank plans to do under the Dashboard regime. Alas. Instead, supervisors champion opacity. The ECB, for example, offers aggregate bank data via their impenetrable Statistical Data Warehouse, which hijacks your web-browser upon entry, so I won't share the relevant link.

French supervisor ACP does a slightly better job. It offers detailed bank data on a dedicated website.  So far so good. Unfortunately, the data covers only the largest banks. Moreover, users can télécharge (download) zip-files that contain myriad of csv files - in French. I am afraid that ACP does not worry about the interests of retail investors or foreign investors.

Very promising is the European Banking Authority, which for the n-th year promises to disclose bank-by-bank data (see the EBA's recent work-plan). I am sorry, but the EBA has been promising this for some time, but then realises it has no resources to deliver.

Admitted, there are some okay-ish examples. The Central Bank of the Netherlands, for example, publishes a dashboard of sorts. Yay! However, the publication frequency is semi-annual, not quarterly. Neither does it look like the information is timely: the last update was on 30 June, reflecting year-end information of 2016. Further, the number of items is low compared to the Dashboard: 23 versus more than 65. There is only one column for Risk Weighted Exposures, whereas the RBNZ Dashboard will report 13 rows on this item.

Maybe matters will change under CRD V, which updates the current EU bank rules. But I have this gut feel that EU bank regulators are happy with the status quo, which offers them private data - thus preventing the public from monitoring their banks (and their supervisors).

Keep up the good work!

Compared to what some other prudential supervisors offer, the RBNZ's Dashboard is meritorious for at least two reasons. Firstly, I am sure the Dashboard will contribute to financial stability and enable depositors and retail investors to better understand and co-supervise our banks, including the Reserve Bank.

Secondly, once we all get the hang of it, there is very little to stop the Reserve Bank from asking more. More data items, and perhaps also disclosures at a higher frequency, eg. monthly, and allowing even more convenient access via an API for platform independence. Why not!

Note, the U.S. has a more elaborate system than the RBNZ proposes with its Dashboard - see here, here, and here. I like this system, because the data can be read straight into research software, so yes, I am impatient … baby steps, baby steps.

(The chart below comes from the RBNZ's final Dashboard policy paper). 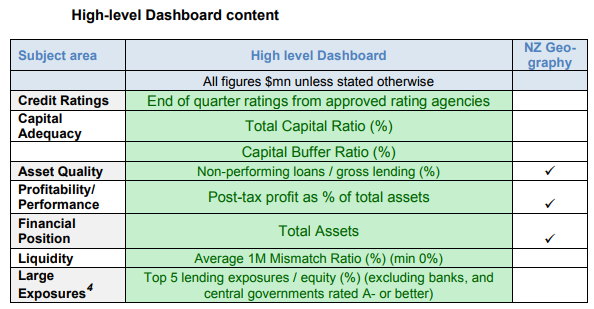 Yes, the RBNZ's Dashboard will be a good development when it arrives next May
However,the key risk of banks at the moment is their mortgage lending. Over the last 5 years it has been extremely lax with high DTIs etc, - but there is no disclosure that readily allows a depositor to see how egrediously loose the lending has been. None, - apart from the effects of reckless lending such as ballooning house prices, low rental yields, and increasing ratio of household debt to household income at levels that will soon cause financial instability.

http://www.interest.co.nz/saving/bank-leverage
shows how bad it is

Will the detail include a Banks covered bonds in value and as % of total Mortgage assets?