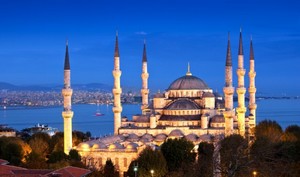 The motivations that underlie a country’s decision to borrow money are not always strictly economic.

Take Turkey, whose ratio of gross external debt (all public and private sector debt) to GDP has increased from 39% in 2012 to 52% today. Turkish President Recep Tayyip Erdogan has been pushing to increase investment by increasing available credit to spur economic activity. This is a political goal, though one motivated by economic objectives. The problem Erdogan encountered, however, is that there was not enough domestic capital available to meet Turkey’s lending needs.

When debt is borrowed in another country’s currency, the borrowing country no longer has the option to depreciate its own currency through monetary policy in order to decrease the relative value of its debt. The other risk involved in foreign currency borrowing  - beyond the risk already inherent in borrowing - is that the borrower’s currency will decline in value and increase the cost of debt service.

For example, if a country borrowed $100 million at 10% in US dollar-denominated debt, it would owe $10 million per year. If the exchange rate between the borrower’s currency and the dollar is 2 to 1, then that $10 million is equal to $20 million of its own currency per year. If its currency depreciated and the exchange rate to the dollar became 4 to 1, it would still owe $10 million, but in terms of its own currency, that figure would have doubled to $40 million in debt service per year.

The pitfalls are clear, but for Turkey, domestic borrowing is not a sufficient option. Banks lend money that is entrusted to them in the form of deposits. The quantity of deposits is determined by a society’s proclivity to save. If deposits are lacking, then the bank will have only so much domestic capital to lend. Herein lies Turkey’s dilemma: The government wants to boost economic growth by extending greater credit to encourage investment, but there isn’t enough domestic capital in the banks to meet these goals. Turkey’s savings rate, at about 15% of GDP, is lower than that of other economies categorized by the International Monetary Fund as being at a similar stage of development.

Turkey’s solution to this capital shortfall has been external borrowing, albeit with some restrictions. Households are not allowed to take out consumer debt that is denominated in foreign currency. Instead, it is primarily financial institutions that borrow in foreign currency - mainly US dollars and euros - and once the capital flows into Turkey, banks extend credit domestically in Turkish lira.

With this maneuver, Turkey is essentially accepting greater long-term financial risk for short-term economic growth. More credit is available for projects now, but with every dollar or euro that is borrowed, Turkey faces an incrementally greater challenge to service its debt should the lira’s value fall relative to the dollar or euro. But Erdogan, who overcame a coup attempt just last year, cannot afford the risk to his presidency that a flailing economy would create. Though he consolidated his position last year after the coup with major political purges, and this year with a referendum that expanded his presidential powers, maintaining positive economic momentum is critical to ensuring the continued support of his base.

There are other ways that Erdogan could increase the availability of capital for lending within Turkey, but they come with their own constraints. Raising interest rates would increase savings and attract more lira deposits. Turkey has done this to some extent, but it can push rates only so high. For while higher interest rates encourage people to deposit money in interest-earning accounts, they also increase the cost of borrowing money domestically. When deposit rates go up, borrowing rates must also go up so that the bank can maintain a spread and, therefore, profitability.

The need to both maintain a strong lira and keep credit freely available has opened somewhat of a rift between Erdogan and Turkey’s central bank. The bank sees the abundance of credit and growing inflation as a threat to the lira’s strength - and thus Turkey’s ability to service its foreign debt - and so it wants to increase interest rates. But higher rates mean less credit, and Erdogan needs to keep the debt tap open to prevent an erosion of his control over the country.

Turkey’s problems aren’t just its own. Turkey has the 17th-largest economy in the world. If it were to falter, the implications for its lenders would be severe. But its finances also affect regional security. If Turkey is financially stable and politically united, it can turn its gaze outward and try to exert greater control over its near abroad. But if Turkey’s financial system is compromised in a run on foreign exchange reserves, then its economy will be threatened, and with it, Turkey’s ability to maintain its ever-growing military deployment in Syria. Without a Turkish presence in western Syria, then Iran, which has been Turkey’s rival since the days of the Ottoman Empire, would have a freer hand to influence areas farther west in Syria - areas that Turkey would prefer it to stay out of.

Turkey’s approach entails greater, but not unmanageable, risk. Should it fail, such as in the event of a rapid fall in the value of the lira, Turkey’s financial system - and thus its immediate ability to project power - would be weakened.

*George Friedman is editor of This Week in Geopolitics at Mauldin Economics. Xander Snyder is a geopolitical analyst at Geopolitical Futures. This article was first published here and is used with permission.