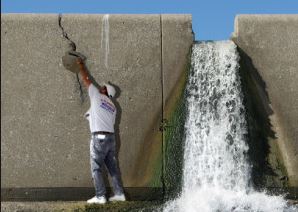 After a very protracted purchasing process the ‘favoured’ Chinese bidders have walked away from purchasing Jericho Station from Landcorp.

Speculation is that the Government strengthening of the restrictions on foreigners buying New Zealand farmland introduced last December is the reason.

Jericho Station is 1359ha sheep and beef property situated in Southland. The now successful underbidder is Southland farmer Ed Pinckney who reportedly had an offer on the table for $8.5m back in June 2016 when Landcorp accepted $8.7m from the Chinses bidder.

Twenty months have passed since then and if we are generous and compound a 2.5% interest cost by 18 months on $10m (including plant and livestock) then the deal has cost $367,000 in lost opportunity in that time - although final settlement still will not be completed until June.

Perhaps this explains some of the lack of profitability shown by Landcorp in recent times.

In 2016 LandCorp had 10 farms on the market but apart from Jericho Station the rest have been withdrawn most probably as a response to the current signals coming from politicians.

At around the time Landcorp had these farms on the market Deloitte had completed a report that recommended to the then government that the state-owned farmer should sell all their assets due to the lack of returns being achieved. Reinforcing this is the fact that since 2014 Landcorp has not paid a dividend to Government while still developing in new areas and going through a (costly) rebranding exercise. The land sales are reputed to be to bring in new capital to reduce debt and to allow for new projects.

However, both the past and current Governments appear to enjoy the role of farm ownership and Landcorp’s future for the time being appears safe.

Landcorp’s decisions, aside the public's attitudes to the rights and wrongs of selling land to foreign ownership, appears to be driven more by emotion rather than any real social benefits to New Zealanders wishing to buy into farming. Yes, the price of land has put farm ownership beyond the reach of most aspiring young farmers and yes foreign ownership has contributed somewhat to this increased land cost. How much is debateable however.

If Governments were serious about making farm ownership more accessible to young New Zealanders there are ways they could help, including the selling of state-owned farms.

However, the biggest economic losses are far more likely to be occurring from the sale of the ‘added value’ companies being sold to overseas buyers. The latest being Icebreaker, the successful New Zealand merino clothing company, sold to USA interests for $288 mln, Trilogy International, a New Zealand cosmetic company, sold in December to Chinese owners for $255 mln., plus the majority of meat and milk processing companies now have international ownership.

We always will have the land even if not owned it can’t be removed and as most farmers know, profits are not huge. However what is done with the produce is where the profits are made and control of this is rapidly being passed over to foreign ownership.

How New Zealand can generate the capital to maintain control is obviously difficult but business control does seem to be too readily passed to foreign ownership while the focus remains on land ownership.

The question we need to ask Landcorps management is, why they choose the Chinese bid in the first place. If it was %20 over a local bid I could understand but a few percent should have been an obvious no go, when you have to go through the OIO approval process.

So there must have been another reason that we the public are not privy to.

Agree, however, nobody I've spoken to have come up with an answer. It was thought that perhaps LC had to sell to highest bidder but no evidence found of that. But not all of their decision making appears to be that rational in the last couple of years.

Exactly, and given the opportunity cost in interest alone - should whomever made that curious and ill considered decision not be brought to account?

I'm into conspiracy theories, more than likely China buy a lot of our stuff, it's all available from other countries, so perhaps we needed to let them buy some insurance in NZ to keep the access open.
Remember Key's trip to China and the deal to offload all of Fonterras milk powder stocks, which were becoming an issue at the time. Presto problemo solved.

"Perhaps this explains some of the lack of profitability shown by Landcorp in recent times."

Farm profitability has nothing whatsoever to do with capital sales.....

....unless of course you are in the business of land banking.

"Yes, the price of land has put farm ownership beyond the reach of most aspiring young farmers and yes foreign ownership has contributed somewhat to this increased land cost." One easy way to find out by how much.

"We always will have the land even if not owned it can’t be removed". Man, that one makes the hairs stand up on the back of my neck. We are seeing far, far too much of our land being locked away from us by foreign owners, and we need no-one like Peter Thiel, basically a doomsday prepper, we do not need his like. And as for Chinese buyers, especially ones with state backing, sorry, but we do not need that either, as the Chinese govt is seeking food security for them, they seek to have the entire process from paddock to plate, vertical integration controlled by them, eliminating third parties - by that you can read us.
Our wine industry is quite possibly more than 50% foreign owned now, just where do you think those profits go? Sorry, but that is the same as packing the land up and taking it with you.

Yes, I agree, I would suggest "we always will have the land even if not owned it can’t be removed" is one of the most naive oft-repeated platitudes around right now.

Ownership matters massively, in a world where food security is anticipated to be a major issue in upcoming decades.

New Zealand was unable to keep two French terrorists in jail in the face of French trade threats. Do we really imagine the New Zealand government will be able to put in place legislation that foreign state-private owners do not want, once a critical mass is reached? No way.

And what effect might this have given foreign owners have less incentive to preserve the commons for coming generations of NZers?

We can have sovereignty without ownership of the land? Yeah...how'd that work out for Maori?

People who repeat the mantra that ownership does not matter...I dunno...I wonder if they really believe it or if it's just convenient for the near term to be pushing this.

We just have to look at what the Chinese are up to in the Pacific Islands and parts of Africa. They are buying up everything they can to expand their influence. They are doing the same in NZ with the help of National and Labour.