A kiwi start-up that lets you buy insurance via Facebook is taking on the Aussie giants that dominate the market. Jenée Tibshraeny examines its offering

A kiwi start-up that lets you buy insurance via Facebook is taking on the Aussie giants that dominate the market. Jenée Tibshraeny examines its offering

Disruption, fintech, user experience, agile - the general insurance industry is among those that have trumpeted these on-trend corporate buzzwords more than they’ve implemented them.

With Aussie behemoths IAG and Vero swallowing about 72% of the general insurance market and New Zealand’s Tower biting at another 5%, the industry is void of the competition that forces major innovation.

Sure, there has been some innovation. However bar IAG doing away with frontline staff sales incentives, this has largely been aimed at protecting insurers’ balance sheets in the face of rising claims costs rather than improving customer outcomes.

Yes, it’s in customers’ interests for their insurers to be well-capitalised, but consumers haven’t really enjoyed disruption in the insurance industry as much as they have in other industries.

It is unique from both commercial and consumer perspectives.

As I explained in depth in June, Cove’s products are underwritten by underwriters at Lloyd’s of London, giving it the ability to enter the market without a huge balance sheet of its own.

And quite remarkably from a consumer perspective, Cove sells its products through Facebook’s Messenger app.

What this means is that instead of filling in a form online to get a quote, Cove’s chatbot goes through the questionnaire in a conversational style via Facebook Messenger, in the same way you would have a private conversation with a friend on Messenger.

The questions are still the same as when filling in a regular form for a quote. The point of difference is the format, style and tone. 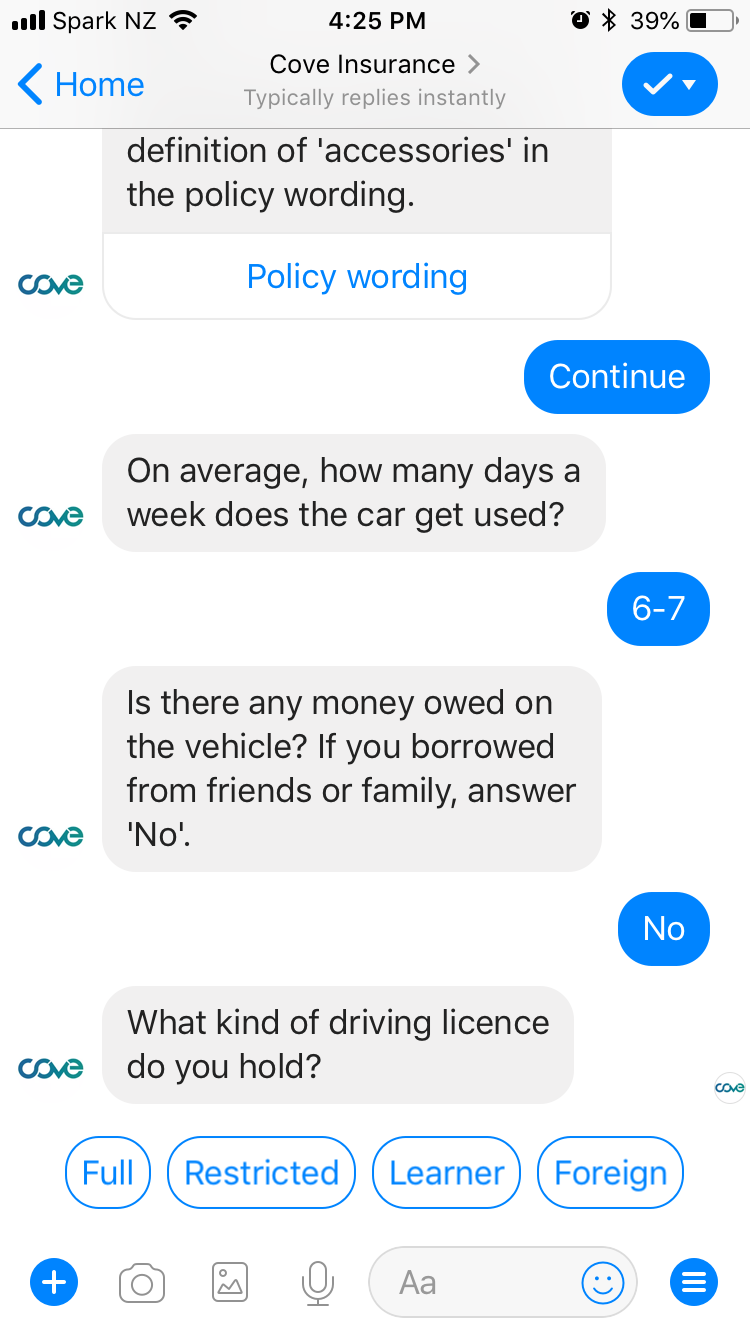 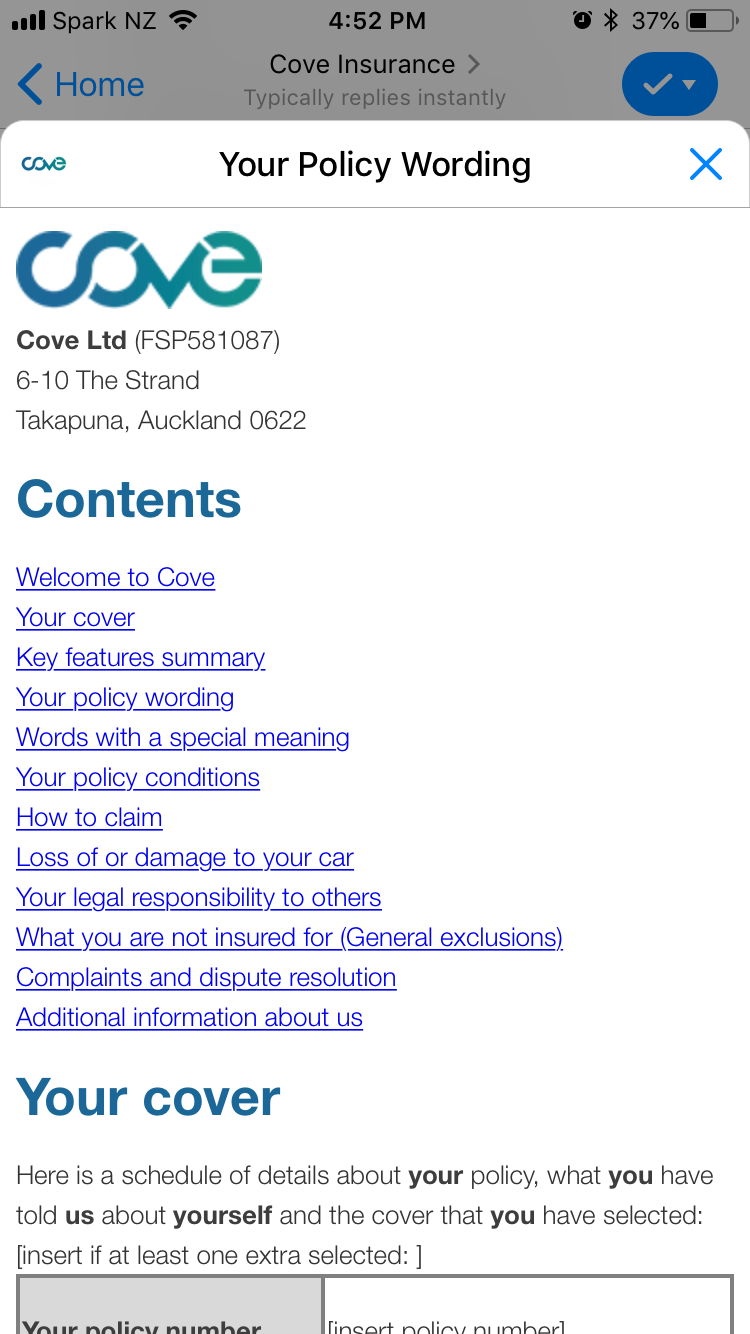 When it comes to making a claim, Cove once again prompts you to use the chatbot.

Eventually Cove wants to get to the point where claimants can upload a video of them explaining their loss; its technology analysing this and in most cases settling the claim immediately.

A not so mysterious mystery shop

There seems to be a lot of interest in Cove’s model; the June story I wrote receiving 11,889 views from all corners of the world.

Now that it has launched to the public, I thought it would be a good time to get some quotes and put the chatbot to the test.

Note I am of the generation that takes to Facebook Messenger quite naturally, but have a job that requires me to think unnaturally critically about insurance.

These are my initial observations:

- The Messenger model shows its value if you get a quote using a mobile phone. It picks up your name, phone number and email address from Facebook, so you don’t have to spent time typing them in on a fiddly phone keyboard. It can also pinpoint your location if you enable your GPS.

Because Cove goes through one question at a time, as opposed to showing you the entire application form, it is very mobile friendly. When accessing a large computer screen and keyboard, I still find a traditional application form more intuitive as I can see what I’ve filled in and how far through the process I am.

The thing Cove needs to be mindful of, especially if it broadens its offering to more complex products, is that it doesn’t become too relatable that people lose sight of the fact they’re entering into a contract, which if they breach, could see their claims declined. Cove needs to ensure its customers don’t use the same blasé approach they might use talking to their friends on Messenger, when talking to their insurer on the same platform.

- The real person who stepped in when the chatbot couldn’t answer my question was great. She provided a good answer without breaking the law and providing financial advice. My criticism is that she took a few minutes to respond - the chatbot in the meantime making an irrelevant comment. People using Facebook Messenger expect instant responses, so even slight delays could prove problematic. - As for the quality of the products on offer, Cove's comprehensive car insurance is on par with others in the market. The only thing is that it doesn’t cover drivers under 21. This puts Cove on the back foot compared to the bulk of its rivals. It also seems counterintuitive given young people are Cove’s target market.

Based on the very brief, unscientific test I did, the cost is on the more affordable end of the spectrum.

- Looking at its mobile phone cover, I am dubious about this as I don’ think it’s worth paying to insure such a low value item. Weirdly, Cove is of the same mind as it wouldn’t let me insure an older model iPhone 6, due to it being worth less than $500.

Nonetheless, I appreciate Cove eventually wants to enable people to insure multiple items, so offering mobile cover is a step in that direction. This is an appealing offering that fills a gap in the New Zealand market.

I am no IT expert, but don't believe Messenger is materially less secure than the likes of Gmail, WhatsApp or my GP's computer system for that matter.

- Finally, until Cove gets its feet off the ground, we won’t know what it’s like when it comes to settling claims. This will be the real test.

Coming back to where we started, the oligopoly that is the insurance industry is ripe for competition. We can be proud a Kiwi start-up has come up with a clever way of cracking in.

Being a coverholder at Lloyd’s gives Cove the financial backing and accountability it needs without being directly regulated by the Reserve Bank.

Yet simply being a disrupter is not good enough. Look at where Youi’s “disruptive” model saw it end up - in court for mis-selling its products.

Unlike the South African executives behind Youi, Brett Wilson and the Coon family behind Cove understand the New Zealand market and have reputations to uphold locally.

Like traditional insurance companies, its conduct will largely fall into a regulatory void, so it needs to take responsibility for its actions.

I wish it well and hope to see its growth spur more genuine consumer-centric innovation in the market.

Be great to think they could challenge the fat and lazy incumbents but regrettably domestic insurance is principally a numbers and data game. The more data you have, the smarter you are in your risk selection and the more margin you make. Off the shelf underwriting tools will get you some of the way but God remains on the side of the big battalions. Size also delivers the critical ability to control the cost of repairs.

Good luck to the Coon lads though, their family has pedigree in sticking it to the insurance establishment. I hope they succeed.

Giving an insurance company all your Facebook data. What could go wrong?
I suspect DNA tests (23&Me) are also sold to the insurance industry.

Ever since inception I refused to join Facebook. While I welcome competition in the insurance industry, it is regrettable that one can only access it through one single channel of technology (Facebook), which has proven itself as untrustworthy.

I would encourage COVE to offer more secure channels and enter the house and contents insurance market too! All the best!

The video upload is interesting - make no mistake, that's all about lie detection. This technology will soon weed out fraudulent complaints pretty damn quickly - so they are absolutely on to a winner. The word will get out...only honest people apply!

"Chatilla did note that image and facial expression recognition systems are improving. According to Singh, we could be just three to four years away from an AI that detects deception flawlessly by reading the emotions behind human expressions".

Cove goes up against Vodafone and Spark for phone insurance, strangely 2degrees doesn't offer it. The Moneyhub guide to phone insurance talks highly of it...