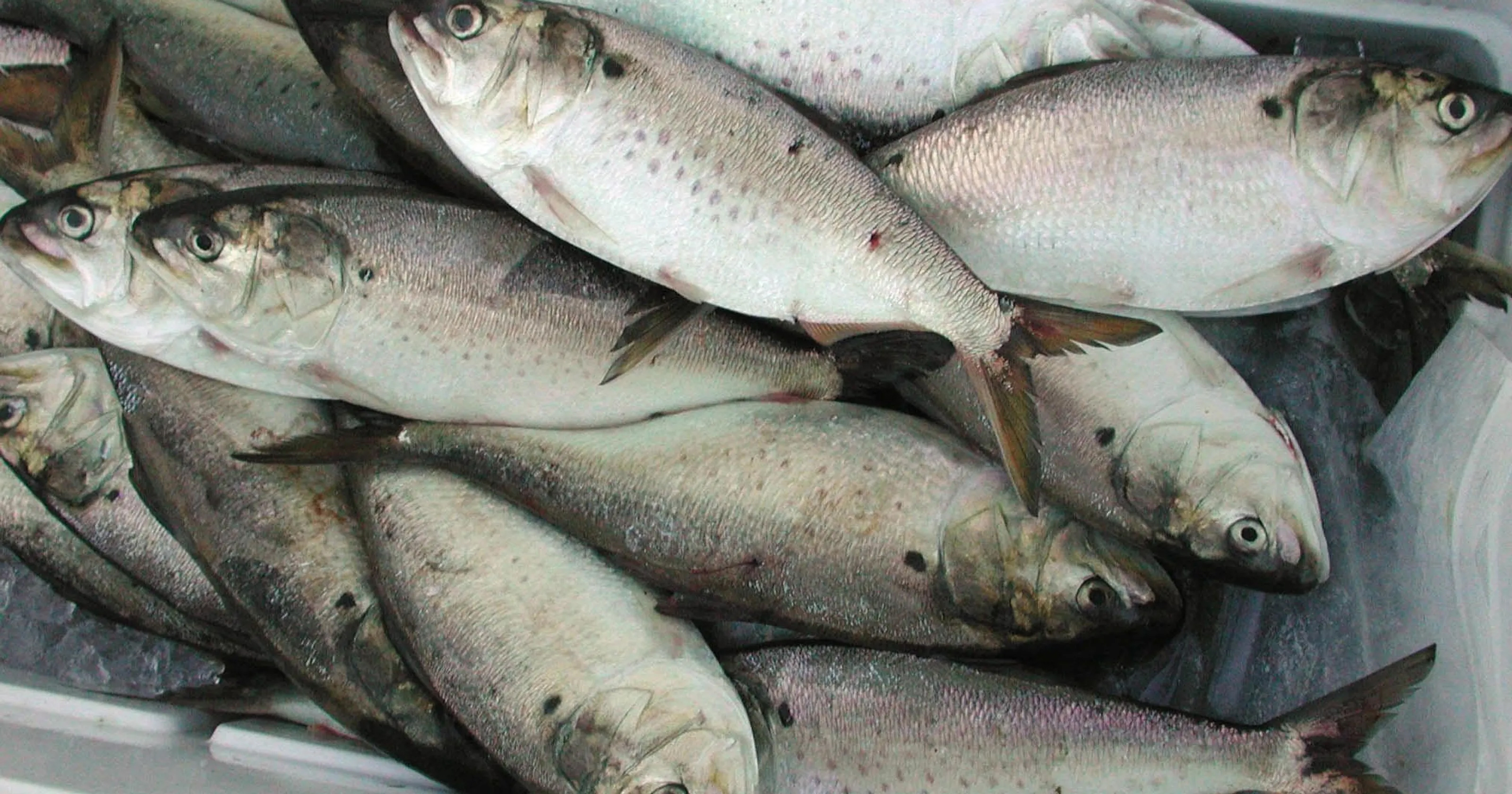 In the January Raving I suggested Statistics NZ may have botched the new migration numbers. Large revisions to the emigration numbers when the December numbers were released today give support to my concern.

But there may be more reasons to question the numbers produced by the statistical model Stats NZ has built to fill the gap left by the dumping of departure cards.

Even after a friendly call from Stats NZ in response to the last Raving I am still sceptical of the statistical model used to estimate numbers for the last 16 months; but Stats NZ fixed most of the problems I identified with Infoshare.

The chart below shows emigration numbers based on the cards that were dumped in November 2018 (black line), the estimated numbers released last month that I suggested were wrong (green line) and the new estimates released today (blue line). The chart shows annualised, seasonally adjusted, threemonth averages. The new annualised estimate for the three months ended November is 15,360 lower than the estimate released last month. Ouch! 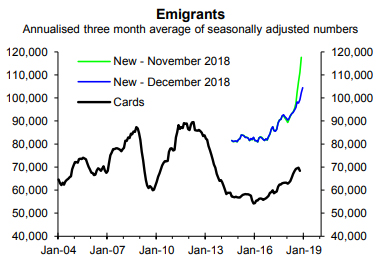 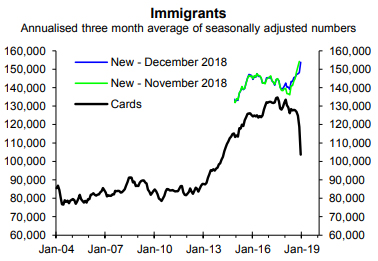 The previous chart uses annualised, seasonally adjusted, three-month averages. The black line is based on the cards that are still in use and suggest immigration numbers are plunging. The green line shows the estimated numbers released last month up to November 2018 and the blue line shows the new estimates released today. There isn't a huge gap between the new numbers and those released last month, but both differ hugely from the cardbased numbers.

There are two options but it may be a bit of both:

• A massive fall in immigration is underway and the statistical model is no good at picking turning points.

• A larger number of immigrants arriving on a permanent or long-term basis have taken to filling in the arrival cards wrong.

Last month commonsense told me that the new estimated emigration numbers were wrong. The huge revisions to the numbers give credence to my concern. Commonsense now suggests something is dramatically wrong with the immigration numbers (i.e. the yawning gap that has opened up in the previous chart between the card-based numbers and the model-based estimates is beyond the realm of reasonable). I am still sceptical of the surge in immigration suggested by the statistical model estimates but I am also sceptical of the plunge suggested by the cards. In time actuals will replace the estimates, revealing what actually occurred. But why hasn't Stats NZ highlighted and tried to explain the massive discrepancy?!

The head boffin at Stats NZ kindly called me in response to the last Raving to discuss the issues I raised. He acknowledged the problems identified with Infoshare regarding it containing several different measures for the immigration numbers. The problems were quickly and largely fixed, but more could still be done to identify which series were discontinued due to the dumping of the departure cards in November 2018.

After reviewing the latest numbers I reiterate my warning to clients and others to be wary of the statistical model's estimates. There will probably be more major revisions. The model may not be good at picking turning points. It is currently picking an upturn in immigration when it is possible a major downturn has recently started.

"..suggest immigration numbers are plunging."
" A massive fall in immigration is underway"
"The model may not be good at picking turning points. It is currently picking an upturn in immigration when it is possible a major downturn has recently started."

That last statement would fit in with the stated policies of the current Government. We shouldn't be surprised.

Hard to imagine it wouldn't be falling

The stats for permanent residency approvals are reliable. The latest for the last 7 months extrapolate to a 9% drop since last yearr.

There is still insatiable demand from millions of people around the world who are desperate to leave their country of origin where the problems are too great to overcome, and to come and live in a beautiful country like ?NZ where there still remains the rule of law, protection for legal ownership of property, excellent education systems, a social value system brought from the British colonisation, democratic government, etcetc.
The Universities & Polytechnics are busy rejigging all their qualifications and transfer systems to help students maximise their post-study work visa rights, regardless of the Govt recent ‘tightening’ so no reduction in this channel.
So, immigration will just keep growing...

Tend to agree - the modest reduction in permanent residency is the result of changes by National 2 years ago. Current govt has made a significant advance by admitting worker exploitation is endemic in our system but has barely changed the rules. By extending work options after graduation we are likely to be bottling up a bigger problem in a few years. For example a new student arrives, studies for 4 years and then works for 3 years after graduation; they bring a partner and have children in NZ - it will be difficult to tell them to leave even if they are only bakers, chefs, petrol station sub-mangers, tourist guides, etc.

NZ Inc today is your archetypal western culture in decline, slowly being taken over by immigrants of all persuasions, under any guise they can get away with & as often as possible. Our birth rate is pathetic, worse in the higher socio-economic echelons, which combined with the dumbing down of our educational standards, goes together to create the perfect storm of the collapse of a civilised society. Okay, so the Brits weren't perfect but if you really want to have something to moan about, you wait til you see what's coming.

You are being far too hard. It is clear that I believe having the highest rate of immigration is harming NZ and would like to see the quantity reduced and the quality improved.
However almost all immigrants from where-ever are ambitious and motivated - even the immigrants who are evil criminals are at a minimum dynamic. When INZ does it job properly and allows in healthy honest immigrants then they are against dumbed down education and most have a better appreciation of both the faults and merits of western civilisation founded on European emperialism.
Excessive immigration is making us poorer, destroying social cohesion and generally causing housing and congestion problems. What they are not doing is collapsing civilisation - they are desperate to support it.