Community-oriented, no frills, no fuss, low fees credit unions looking to build membership; Position themselves as a trustworthy alternative to 'big banks'

Community-oriented, no frills, no fuss, low fees credit unions looking to build membership; Position themselves as a trustworthy alternative to 'big banks' 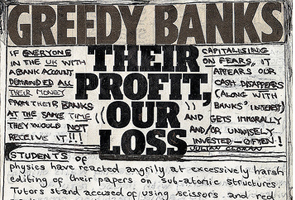 New Zealand credit unions, the shrinking rural violet of the banking sector, have taken an uncharacteristically bold move to steal customers from the "greedy banks" by positioning themselves as the "easy" more trustworthy alternative.

A group of seven credit unions, including Baywide (one of the country's largest credit unions) last week launched a campaign called Easy Banking  aimed at educating the masses about credit unions and drumming up a stronger customer base outside of the provinces.

The campaign, which consists of television ads and a website, presents credit unions as a worthy suitor for Kiwis "worn down by the weight of greedy banks.''

Baywide's chief executive Gavin Earle said credit unions want to market themselves as an financial outfit that "works alongside" customers instead of "on the backs" of them.

As one of those disenchanted mainstreamers the credit unions are hoping to woo, I'll be watching their movements with interest.

I have long regarded this underdog of the banking sector as a exclusive club for farmers - or else socialists; an impression based on false assumptions and pure ignorance.

Superficially, credit unions might have a rural persona and a pinkish hew but the reasons have less to do with agriculture and politics than a sense of community. At least that's what I am told.

Unlike the conventional shareholder structure of a regular bank, credit unions are locally owned and "democratically" controlled by members. As such, members get a say (that's a vote) in how to run and govern these small scale banking outfits.

In reading their materials, one gets the overwhelming sense that they are more about people than profits. Earnings are poured back into operations to finance better products and services for members, instead of pad the pockets of overpaid CEOs.

Fees as a result are relatively low, and there is an overriding philosophy is to push education over products.

Jonathan Lee, business development manager for the New Zealand Credit Union Association, says while financial literacy has always been an implicit part of credit union operations, it has come to play a growing role since the Global Financial Crisis.

Both here and abroad, that has manifested in collaborations with schools, employers and non-government organisations who see value and merit in trying to achieve better financial outcomes for average folks just trying to get ahead.

Lee says it's not uncommon for credit union members to advocate on behalf of another member, for instance if they're negotiating a car purchase, or working through debt problems or a budgeting crisis.

This spirit of cooperation and sense of community (devoid of the usual profit-driven motives underlying the corporate banking system) is resonating with a public increasingly wary of the mainstream.

In Australia, where four million citizens have opted to go with credit unions over conventional banks, the "Big Four" are now flanked by a "fifth pillar."

New Zealand, with only 214,000 members, may be small by comparison but the numbers are growing.

Among the 21 credit unions that belong to the New Zealand Credit Union Association, there are about 95 branches serving some 177,000 members with combined assets worth NZ$625 million.

Because revenues generated by credit unions have tended to be reinvested in their own operations, and improving services, marketing has never been a big priority, which is why you don't hear about credit unions and why they have remained on the fringes of the banking sector.
This understated approach has tended to add to their charm but credit unions world-wide are starting to capitalise on the public's contempt for over-paid banking executives and million-dollar bonuses by taking a more active approach to build their brand and membership.
A recent survey comparing customer service levels between conventional banks and credit unions (based on a mystery shopping exercise) found satisfaction levels higher at the latter.
Fancy 8.1% on a 2-year deposit?
But it's not only low fees and the friendliness factor that are generating attention for credit unions. Their interest rates on deposits are turning heads as well.
Credit Union Aotearoa is offering at the moment 8.10% on a two-year term deposit. You won't find that rate anywhere except outside of a finance company these days, an investment risk not many are willing to take.
Little wonder that Credit Union Aotearoa is the fastest growing credit union bar none world-wide.
One might imagine a junk status credit rating (signaling extreme risk for a depositor) but on this term deposit there is none.
According to the Reserve Bank of New Zealand rules, deposit takers with consolidated liabilities (deposits) of less than NZ$20 million are exempt from the requirement for a credit rating. CU Aotearoa falls into the category, as do most of the credit unions in New Zealand, with the exception of the four biggest ones.
Lee, with the NZCUA, advises that among those that are rated, their ratings are BB stable. That's from Standard & Poor's.
The credit union association is itself also rated BB stable. (For a guide to credit ratings click here).
As a general rule of the thumb the lower the credit rating, the higher the risk.
In the case of credit unions, that would not appear to be the case.
Why?
According to Lee, the credit ratings are "more a reflection of the size of the credit unions themselves, rather than any inherent risk associated with them.''  Credit unions are generally well capitalised and with a "capital adequacy rate" of around 25%, he adds.
The rating agency's themselves apparently acknowledge the bias in their ratings toward scale.
'Protection against speculative lending'
Ratings aside, credit unions claim to be pickier about who they lend to. That's embedded in their mission statement and their philosophy, says Lee.  Not being exclusively profit-driven provides some protection against speculative lending and high risk practices.
"Our mutuality lends itself towards an inherent conservatism to lending as mutuals do not seek to maximise returns to an external group of shareholders (and therefore avoid taking undue risk),'' says Lee.
This is a distinguishing point with credit union and finance companies vast numbers of whom collapsed because of  related party exposure (lending to associated parties and then borrowing it back).
One might expect the low risk, low fee, grassroots culture of credit unions to appeal to a mostly older clientele, however the stereotype no longer holds true. The average age now of a credit union customer is 34.
Among an even younger group, the distaste for mainstream banking channels has given birth to an IT drive youth movement that is aiming to make credit unions hip and cool. This video production below is a sample of that.
Aotearoa Credit UnionNew Zealand Credit Union AssociationYoung and FreeBaywideTerm depositsCredit UnionsCredit Ratingsalternative bankingJonathan LeeGavin Earle

How safe are they compared to a bank?  I understand that all deposits at a bank are unsecured (i.e. there is absolutely no gurantee), however If a bank defaults, the Govt will most likely step in and rescue.

What about a credit union? Can Credit units lend more $$ than they have as deposits like a bank?

I very much like the idea of not making the banks richer, and keeping profits in the community.  The world would be a better place if this always happened.