I'm not big on credit, so much so that I have avoided getting a getting a card since moving to NZ five years ago.

Actually, that's not entirely true. I ended up getting a faux VISA card, you know one of those cards that is tied to your cheque account so you can't spend what you don't have.

Also, I've hung onto a Mastercard from Canada partly for illogical sentimental reasons, but mainly for small purchases that I can repay in Canadian dollars to take advantage of the exchange rate currently around 81.42 NZc for every 1 Canadian dollar when I last checked.

I admit to getting a little slack on full balance repayment, usually because the amounts are so miniscule as to easily forget about them.  I was reminded recently why even small balances can be crushing and why one should never get comfortable about credit.

It was underscored for me in my most recent statement.

On my wee balance of C$139.26, at an annual interest rate of 19.5%, I was informed it would take me 16 months to pay off. That's assuming I paid the minimum balance each time. On that particular statement the minimum was C$12. Creditors calculate the minimum payments at a different rate. (For details on the rate variations among New Zealand creditors and how they stack up over-time, see this story.)

I suffered a case of bill shock on two fronts: the actual timeframe to repay the debt was surprising but not entirely unexpected given the nature of my work and place of employment. What was more shocking, was the inclusion of this information itself. To the best of my recollection, it was the first time any creditor had been bold enough to point out  how achingly long  it takes to pay off a debt on a minimum repayment basis. 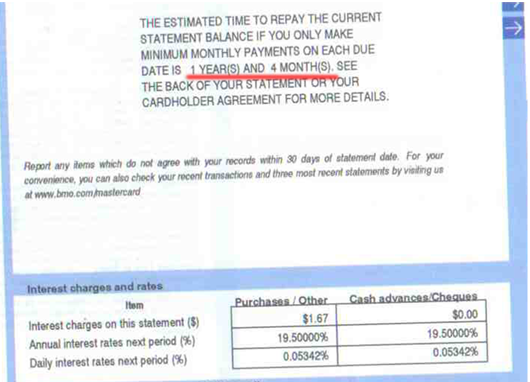 What I would have liked to have seen -- and which would have had me running to the computer to pay off the balance pronto, was the total cost of borrowing stretched over that period. Creditors aren't terribly keen to amend their billing system to impress upon borrowers that incendiary piece of information but things are moving in that direction, albeit slowly in New Zealand.

Given the explosion in household debt over the past few decades (New Zealand household debt has increased more than six times from 1990 to 2008) financial regulators abroad have been pushing creditors to come clean with consumers about the true cost of borrowing when you're not repaying the balance in full each month. United States, Canada, Australia and the United Kingdom are among those that have moved or are moving in that direction.

New Zealander's love affair and reliance on credit cards is more subdued than other places. We have about NZ$5.4 billion on the plastic compared to Australia with around A$50 billion. Accounting for their bigger population, they spend put about 2.5 times more on credit cards than we do.

Regardless, greater transparency on credit cards would be welcome here too given the big push to increase national savings.

While the issue has been on Retirement Commissioner Diana Crossan's eliminate-dumb-debt radar for some time, and could one day came into force, forgetful credit card users don't have to wait for the day.

On-line credit card calculators are all the rage. Test drive ours here at interest.co.nz (look right) and you'll see why.

When those ugly numbers and time frames are calculated and laid-bare in plain terms and bold print, borrowing becomes a decidedly less attractive option.

Aaron Baxter, Managing Director of GE Capital New  Zealand (which launched May 3 a new credit card which offers a six-month interest free period) said while the company has no immediate plans to incorporate the cost of long-term debt that falls outside of the interest-free period, it was sensitive to the debt problem facing households in New  Zealand.

"We take our responsible lending position very seriously being a global multi-national at a very high level,'' said Baxter.

Baxter said that ethic was reflected in strict approval requirements for card holders (who needed to demonstrate their ability to finance debt) and the disclosure of fees at the time of an application. Language was also being scrubbed of obscure terms and confusing financial lingo.

For those who used credit responsibly, Baxter argued that GE's new card (the Gem Visa) gave consumers the upper hand, if they were disciplined financial managers.

Whilst the average interest-free period on most cards is 55 days, GE Capital upped the ante with six months. The interest rate that kicked in after that was 24.9%.

For a full-range of credit cards on offer in New Zealand and their respective rates and interest-free periods, see our credit card section here.

The bank isn't FORCING you to use their credit.

Anyone who pays credit card interest is a mug - use the card to consolidate your monthly spending, use the interest-free period and pay it off in full.