Social barometer finds 9/10 Kiwis satisfied with life; highest satisfaction levels among the young and elderly and over $70K a year lot

Personal Finance
Social barometer finds 9/10 Kiwis satisfied with life; highest satisfaction levels among the young and elderly and over $70K a year lot 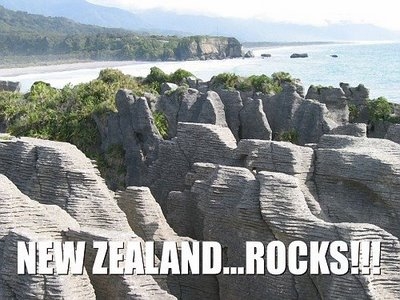 Despite perennial complaints about New Zealand's low wage disadvantage, life satisfaction in the land of the Long White Cloud is surprisingly high.

Statistics New Zealand, in its latest General Social Survey gauging financial and emotional well-being, reports that nine out of 10 New Zealanders purport to be "satisfied" with life.

Principal statistician Paul Brown said the result was comparable to other developed countries including Australia, the United Kingdom, or Canada.

Whatever financial insecurities Kiwi's may feel, relative to more prosperous OECD nations, would appear to be compensated for by social currency.

Nearly all (96%) of people surveyed indicated they could get support from others in a time of a crisis. As well, more than 90% had seen friends at least once in the last four weeks and more than 80% having seen family they didn't live with.

Life satisfaction rates were broadly the same across the country.

Brown, in his commentary notes, said the biggest differences related to age and income levels with life satisfaction reducing with decreased household income most sharply for those living off less than $30,000 a year. 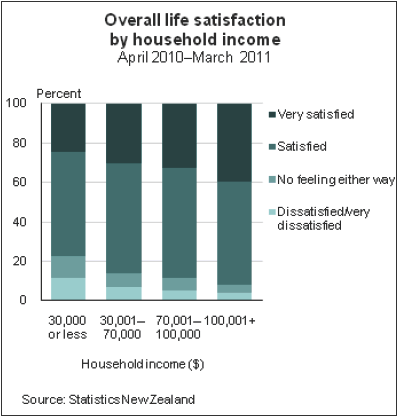 Young and free, old and wise

Money aside, the older and younger tend to be the happier.

However, tiresome mid-life burdens, they paled compared to the colder reality of unemployment.

Among the unemployed,  46% reported not having enough money to meet their everyday needs. They were also twice as likely to feel they had been discriminated against in the last 12 months than employed people and those not in the labour force. Feelings of social isolation were also more rampant among the unemployed.

Single parents were also markedly less satisfied, at least compared to standard family models.The survey found that one-parented householders were more than twice as likely to say there were either "dissatisfied" or "very dissatisfied" with their lives.

This demographic was also more likely to report not having enough money to meet their daily costs and also having to deal with problems related to their house or flats, most likely to because they were renters, another factor that correlated to lower satisfaction.

People living in rented premises were twice as likely as those living in their own house to be unable to meet their everyday  needs. Complaints related to poor housing standards and feeling of social isolation were also rife among renters with 53% experiencing one or more "major" problems relating to their house or flat, compared to 28% of owner occupied dwellings.

If home ownership bodes well for one's social connectedness, it also does wonders for the community. People in owner occupied dwelling were far more likely to have done volunteer week in the last four weeks, compared to renters.

The questions that springs to my mind is the worrying implications for those who do not adequately plan for their retirement. Those lucky enough to receive the New Zealand Superannuation but with no other income could find their life decidedly unsatisfactory if money is the issue.

The pay out rates below explains why.

The only thing I didn't get enough of was the '80s.

Great choice, Amanda.   You can't have too much Depeche Mode as far as I'm concerned.

So money does make you happier?

Only marginally so past a certain amount, I understand $75k is the sweet spot. Guess it depends what makes your clock tick, and your lifestyle too.

I'm grumpy for all sorts of other reasons. What's your reason for grumpiness Wolly? ;)

We own our own home and have a mortgage  on it.

Grumpy...me!....hmmmmmmm.....where to start....posturing pollies promising pork to punters would be up there....Sir Humphreys being given more taxpayer dosh than the President of the USA every year...a close second....councils deciding they have a right to play at "make work" schemes using rates and seriously bloated fees and charges....yep that's the third one...SOE bosses lording it in a bath of loot...not too happy with them what argue the economy can be saved if pensions are cut or paid out later...angry as hell that idiots have given away our fish stock to foreign companies...oh and grumpy that Bollard seems to be free to debase the currency any which way he can.

Gee Bernard...I didn't know the banks had you by the scruff of the neck...you poor sod....

I rent a 3br place for $90 a week...free firewood on the beach...Rabbits and Fallow Deer abound...but no fish!

You must not be grumpy at your age Bernard....plenty of time later for that. :)

I'm not surprised at the level of satisfaction among certain sectors - boomers and the elderly have reamed massive tax-free capital gains, and the young are porked to high heaven with welfare payouts. Maybe they should ask the ever growing stream of qualified expats how satisfied they were with crap wages and unaffordable housing.

Once all your baisic needs are met. ie warm in winter, well fed etc, there is very little correlation between money and happiness.  Doodads, and deedaws don't bring hapiness,  I was a miserable bugger making 75k, and I'm still a miserable bugger with my own business paying myself 22k.

Home-owners most content  -  enjoying their own patch of Godzone -  if they want to paint a wall or plant a tree they can just take the plunge & go right ahead.   Then when they retire mortgage free (with no clever financial scheme/s to tempt them / rip them off) they can at least have no accommodation expenses....

Of course there is an 'accommodation expense' to those who retire with a mortgage free home - it's the forgone 'expense' of alternative application of those funds. The equity tied up in a mortgage free house has to be compared with what investment income, even it's just a bank term deposit, that can be received by employing the funds elsewhere. That's why the equity tied up in a home should be taxed, like all income  ( and will be in due course? )to better equate it with those who rent ; but that's a whole other discussion.

Is this a living tax for living in a house you own?  As opposed to paying the mortgage off for a PI while they get/got tax free capital gains? I'm just saying the last thing you want when you are retired, is to be worried about getting kicked out because you can't afford the rent.  Struggling to pay the power bill and food because inflation has wiped out your super low risk bonds, give or take an IMF sponsered haircut or two.

The BIGGEST waste of resource in NZ is Interest!  2-3 times the value of a home goes in interest, if we didn't have BS inflation, you could save buy a house, do what you want with your money.  Instead we have to give it to banks/finance companies/super scheems/kiwisaver.

12% of GDP per year is wasted on interest, thats more the govt borrowed last year.  And it went where?  All because we have inflation!

National Super affords a more than adequate lifestyle if you own your own mortgage-free house.  Most families I know with two or more children live on less than $511 a week after mortgage or rent costs.   Housing costs are the killer, and superannuitants generally don't have them.

well said there is a thing called balance. Just make more in relative terms to everyone around you and you can have the home and investments then the opportunity cost diminish.

There are many things that are more important than money. But, - one needs money to get those things!

Right, once you have it

2. How do you stop worrying about losing it?

So don't bother about trying to get it in the first place.