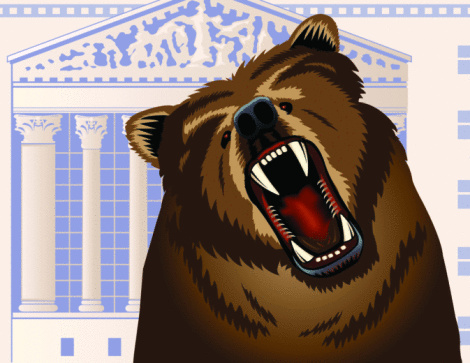 Another warning about the coming explosion of the over-inflated bond bubble. Wall Street Journal Market Watch reporter Sam Mamudi in this piece explains why it's all but inevitable given the rush of investors into the perceived safety of bonds. Here's an excerpt. Read it and weep BH.

"It's fallacious reasoning that you can't lose money in bonds," said James Swanson, chief investment strategist at MFS Investment Management. "Even Treasurys lost some of their principal during the first half of 1987."

But investors seem oblivious to the danger, in part perhaps because bond funds have not suffered such large losses in recent years.

"People are conditioned to push the 'fixed-income' button [in times of trouble] because for nearly 30 years you didn't have to do anything to make money," said Bill Eigen, manager of J.P. Morgan Strategic Income Opportunities Fund JSOAX 0.00% , a bond fund with a flexible, go-anywhere approach.

How do bonds fair against equities over the long term and where does value lie for investors willing to hold the course?

The following two reports, one by Harbour Asset Management, and the another by AMP Capital, offer some perspective on the comparative performance and find reason for hope in today's gloomy economy. HT to Craig Simpson. 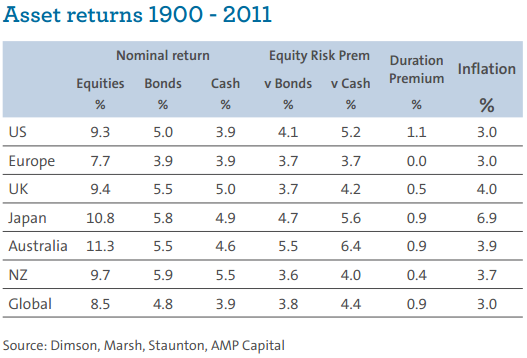 Statistics can be packaged and presented in all manner of ways. It's the after tax and fees inflation adjusted figure that you'll care about most as an investor. So what kind of returns are realistic going forward in this perfect storm of first world sovereign debt? Some financial planners are lowering their forecasts for the decade ahead to 4% (adjusted for inflation) for a diversified portfolio consisting of 60% equities and 40% bonds.

Read more here in this Globe and Mail investors piece.

The Age's investment columnist Noel Whittaker takes a rather optimistic view on the long-term outlook for a reader in his latest Q&A when asked whether a self-employed musician at age 51 with only $2K in savings is doomed for retirement. His best advice? For the muso to give himself an education about money starting with The Richest Man in Babylon by George Clason.

Some other interesting bits and and pieces of financial advice in Noel's column.

Financial advisor Julie Murphy Casserly, in her latest blog The Power of One, looks at how to get unstuck when one loses track and or sight of one's goals.

Simple advice but she's bang on: Don't get overwhelmed or discouraged by looking at the big picture and your failings to be where you want, rather take one small step toward making a change for the better - that is, a phone call, an email, or putting pen to paper.