Term deposits vs, property vs the NZX; a simple case study.

Term deposits vs, property vs the NZX; a simple case study. 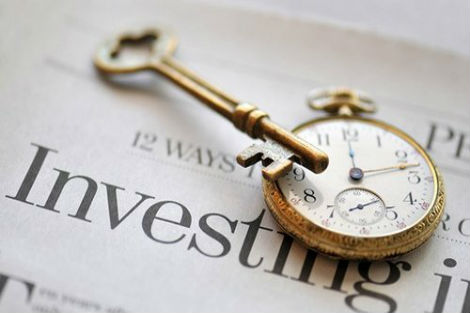 Not too long ago, I linked to a column from the Motley Fool showing the comparative returns on cash in the bank vs the performance of the Australian and U.S. share market over a 30 year time frame.

Using data supplied by Index fund pioneer Vanguard, investment analyst Scott Phillips did a case study of how an investor back in 1982 with A$10,000 would have fared by 2012 if they'd put their money into cash versus, the S&P 500 or Australian equities.

For the benefit of those who might have missed it or didn't read the link, that $10,000 with a return of 8.6% (that's based on the Aussie bank bill rate) would be worth $118,000 today. A decent return but modest compared to how that same investor would have done had they invested in U.S. shares instead, which even through the global financial crisis and downturn, managed to produce 11.6% annually. That $10,000 according to the Vanguard data was calculated to be worth $271,000 by 2012 factoring in a currency conversion into Australian dollars. (Obviously the anlaysis was done for the benefit of Australian readers.) What was even more interesting was that same $10K invested in Australian equities over 30 years would have returned 12% p.a., resulting in $300,000. All the numbers above are adjusted for inflation which grew an average of 4% a year over that period.

How would that $10K were have performed if invested in New Zealand shares, vs. residential property vs. cash?

Comparisons are not so straight forward.

For one, the NZX50 has only been around, in its present form, since early 2003. The NZX has back-calculated data from 29 December 2000 and while this provides the ability to calculate returns from this date to now, in order to calculate return data for longer time periods analysts have had to stitch together the NZX50, together with NZX40 (an index for NZ's 40 largest companies) and its precedessors. The two most significant differences between the NZX 40 Index and the NZX 50 Index are (a) the NZX 40 Index was weighted by full market capitalisation, whereas the NZX 50 Index uses a Modified Free Float methodology; and (b) the NZX 50 Index contains an additional 10 companies.

FundSource, the research arm of the NZX, in its Asset Class Performance Report to June 2010 constructed an index to get 10 year and 20 year comparative data. The NZX All Index ''measures the total return which an investor might have received (before taxes and transaction costs) in the form of capital gains or losses and dividend reinvestment."

Because the returns on the various indices were calculated in different ways, the NZX All Index is an imperfect measure and yet it may serve as a crude gauge for comparing asset class performance.

To see how an investor with $10,000 would have fared investing in NZ shares versus short term deposits we have constructed the following chart an eight-year period from October 2004 to October 2012.

Over this time frame, cash (as measured by the 90-day bill rate) actually out-performed equities (albeit barely) - by $100 or so.

It's hardly a compelling case for equities however we can't forget markets in 2008 and 2009, took one of the worst beatings since the Great Depression. Over a longer period of time, equities historically have tended to outperform other asset classes, as illustrated in the twenty year return chart below.

According to the FundSource report in the 10 years to June 2010, cash still came ahead of shares returning 6% and 5.8% a year respectively. 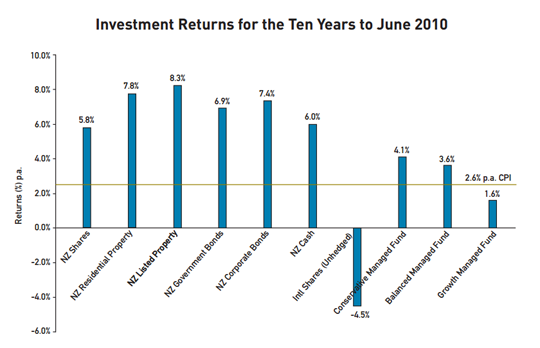 As the second chart below shows, New Zealand Government bonds proved the best relative asset class performer delivering per annum returns of 8.3% over 20 years and 6.9% per annum over 10. Over 20 years, equities edged out cash; 7.3% compared to 6.7% per annum.

So how do stocks and bonds stack up to residential property?

The measurements for comparing are crude and do not reflect the experience of every investor so need to be treated with caution.* 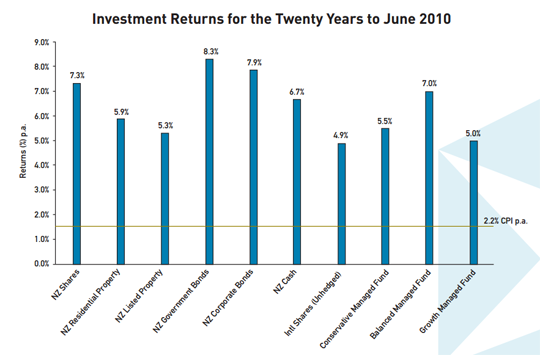 The worst performing asset class over 20 years? According to FundSource research, that would be unhedged international equities which returned on average 4.9% per annum..

Chasing the asset class with the highest returns is always a risky game and one that most always ends in tears for the investor.

At the end of the day, where you invest your money should be structured around your personal goals, your time frame for investing, your appetite for risks and the investments that you understand best. And a reminder, under the new Financial Markets Authority, only authorised financial advisors (AFA's) are able to give personalised investment advice on this question.

*Fundsource measures residential property performance based on Quotable Value Quarterly House Price Index data which takes into account the average sale prices in relation to the average capital value of properties sold as well as the volume of sales.

The returns from the S&P 500 have not been so cute over the last 5 years despite record  Federal Reserve lending via QE, TOMO,POMO etc.

Over 20 years to 2010 property prices rose 6%PA.  This is a tax free return not comparable to other pre-tax returns.

Including rents into the return produces an after tax IRR of 10.25%PA over the past 20 years for residential property.  That compares to NZ Govt Bonds at 5.7%PA after tax.

Over 30 years the after tax IRR for residential property was 16.57%PA after tax (thanks to price inflation in the 80s).  For bonds it was about 6%PA after tax.

And property isn't the head of the class??

Brilliant comment Chris_J!
In 2007, using a DCF approach whiich included the benefit of not paying rent, I calculated 18.6% YoY appreciation from 1995, thanks to the ocurring property boom at the time.
One question though, if I may, will the tax on bonds vary or will it be the same regardless of income?
Inadvertedly I hope, you are making a strong case for taxing residential property!
I should have moved to NZ 30 years ago, not 20. I would have enjoyed it for 10 more years, and made more money.
Loving New Zealand.
HGW

No, property is the dunce of the class. Investor demand for housing and the foreign borrowing to facilitate it are the primary reason for our current account deficit woes and the high kiwi, which is destroying our export economy which over time eviscerates the middle class and will ultimately bankrupt us as a nation.

property is top of the class if short-term self interest is your only concern. Which I guess sums up most landlord/investor types like yourself.

Property is the first choice of the people. The People instinctively understand that a real-world bricks & mortar house cannot be swindled from them in the same way that Shares can be turned valueless, TDs can become non-withdrawable, etc.
The lowest risk investment atm is to pay down your mortgage.
To live in a debt-free house, with no other debts, is quite a strong fortress against the turmoil that the world economy is about enter into - getting worse by the month.
Why would you have a 150k mortgage with 80k shares & 60k TDS?   Neither is safe.  Better to repay your mortgage.  Then invest in other areas if suitable....