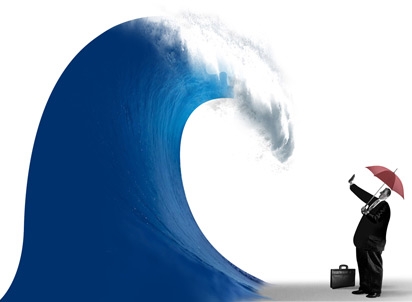 When I was a kid, I imagined the future looking something akin to the world depicted in the cartoon Futurama, minus the aliens.

I imagined flying cars and elevated floating sidewalks, and me with four kids and a fat bottom.

The rearview isn't quite as bad as I thought, maybe owing to the fact that I have two kids and not four, and the outlook isn't near what I envisioned.

While the Internet has changed the world in a massive way everything else is more or less the same. Even my favourite candy (Bottle Caps and Lik-M'Aid) are still kicking around although I think they've been rebranded. It's the next 20 years, the future that really was too far away from me to see with any clarity, that will prove to be the game changer.

I don't expect my car will be flying but you never know. If it is, the greater problem could be retraining all us seniors used to old school technology although I expect the youngsters will make it very simple for us.

The glimpse of the future I have now is clearer than ever and it's grey. Another preconception I will have to rid myself of between now and then is kicking back on a rocking chair knitting baby booties. Chances are I will be working. In all probability so too will you.

And that my friends is my very long preamble to the first of a five part series on retirement from Reuters looking at the women in the workforce and why grey is and will be the new black for a very long time to come.

The same has been forecast for New Zealand. The Department of Labour has some interesting facts and projections here in this research report on our rapidly ageing workforce. Here's a snapshot.

As an alternative to women having to work past 65 to make up for lost time and deficient savings, the Financial Services Council is proposing, as part of its KiwiSaver Plus scheme, a plan whereby women with insufficient savings to buy a pension (that pays the equivalent income of NZ Super from age 65) receive a taxpayer funded top up. See the FSC's press release here for details.

The FSC suggests this is necessary to redress the savings gap between men and women caused by women taking time out of the workforce to raise children or care for the elderly.

The issue of ageing and pensions and workforce demographics, however boring, is going to become an increasingly important issue for Governments worldwide and their citizens. And of course where there's a possibility of financial gain you just know someone is going to try to exploit it. Here's an interesting article from the Guardian about pension predators who are capitalising on the desperation of those bumping up against retirement but needing immediate access to their savings. These pension predators are the equivalent of pay day lenders. They take half your pension in exchange for instance money. A new entry for my book under the financial vampires section.

And more on retirement saving logistics. It was announced yesterday that effective July, 2013, the TransTasman Portability Agreement (allowing New Zealanders and Australians to move their pension funds across the border) will be allowed to do so. This is one instance where I would recommend consulting an authorised financial advisor or tax specialist to determine whether it makes sense to do so.

5) Living the life you love

Pension Predators.  Unbelievable these people exist but they do.

Kiwisaver to me is a good thing as it has the potential to provide for people and my taxes won't have to.   Hopefully National Super will be eliminated.

Protecting the vunerable and stupid is neccessary, and has the additional benefit of protecting the wiser who will be paying out tax for those who end up with no funds.

Kiwisaver is probably going to have to have a compulsory minimum annunity at 65 to avoid the lot going west immediately.  And the stupid people ending up on a benefit and a cost to the taxpayer

Agree Kiwisaver is a good thing.  If National Super is eliminated, can we distribute all the NZ Super Fund balance amongst the Kiwisavers?

Some days I wonder if the idea that the nameless taxpayer should fund anything and everything doesn't destroy community.

The tax payer gets treated like a cow who should just stand quietly to be milked whilst the recipient gets a sense of entitlement over people he or she doesn't even meet.

At least when we help each other directly it builds community at every level. It's one of the good things to come from all these earthquakes.

It would be nice from my perspective if everything was user-pay. Need schooling for your kids - pay for it, need health-care, pay for it, run a-foul of the law - pay for it. Etc etc.

Minimal tax to pay for some (very) basic infrastracture (some parts of police, some govt departments that promote NZ growth and manage a few things) - say... 1% flat.

Of course this is all good and well in a society that is happy to let the poor fall through the cracks, but I can't see you agreeing to that Ralph.

For all the forms of financial crack filler tried in the last 5000 years the poor are still with us.

"The FSC suggests......" oh great...how much $ are we wasting on funding the FSC?...and since when was having children not a personal choice!....does this mean the women who cannot for medical reasons have a child, shall also receive a top up c/- the taxpayer...what about the women who smoked away their income or drank it or gambled it away...are they also to get a top up!....and how many bureaucrats will it take to manage this idiotic idea!

What we have here is a stoopid idea from a bunch of fools who think pommy socialism will be great for NZ. Look what it's done for the UK....flat broke and in debt for hundreds of billions over the next 100 years...fabulously dumb mess they have got themselves into...so why should we follow along behind...just because some fools say it will be great...it won't.

".... this is necessary to redress the savings gap between men and women caused by women taking time out of the workforce to raise children or care for the elderly."...this is just rubbish on so many levels.

Calm down Wolly dear, FSC isn't taxpayer funded so you're not wasting any $ on it.  Their proposal will actually reduce the taxpayer cost of NZS - at the moment all over-65s get taxpayer funding via NZS, under the FSC proposal only people who haven't been able to save enough (even under compulsion) to fund their own NZS will get taxpayer funding.  It's means-testing dressed up under a different name, basically.

FSC are being disingenuous though, when they say their proposal will ensure pensioners get a higher income than just NZS.  Many pensioners already get more than just NZS, through their personal savings and through continued employment, and as KiwiSaver accumulations build up increasing numbers of people will have substantially more than NZS in retirement.

There is sex in there too ;)

No, that's not what FSC intend, that is just FSC making an inept job of presenting their proposal.  This is, that everybody should be obliged to save, and later use the savings to pay their own NZS to themselves.

Anybody who was not able to save enough to cover the cost of their own NZS - for example, but not only, women who had taken time out of the workforce to raise children - would have their income topped up, to ensure that nobody got less than the NZS basic level.

Up
0
by pouggey | 13th Feb 13, 12:31pm 1360711885
Amanda's link was to an article headed "Taxpayer Top up Guarantee Would Help Ensure Gender Fairness".   I'll copy anad paste a bit more:   ~*~*~*~   The proposed FSC KiwiSaver Plus scheme would see almost all women participants receiving a much higher pension in retirement than the NZ Super currently pays, says Financial Services Council chief executive Peter Neilson.   “Our proposals for an enhanced KiwiSaver scheme provide a KiwiSaver pension that is additional to NZ Superannuation,” he said. “Suggestions which assume the FSC sees KiwiSaver as a substitute for NZ Super are wrong and misleading.”   Tax-based retirement schemes have been more popular with women compared to savings-based retirement schemes because:   • women live longer than males, so when their savings are converted into an annuity they would get paid less per year to live on, compared to a standard universal tax paid NZ Super   • women are more likely to have taken time out of the workforce to have a family or care for a relation and therefore would save less, resulting in a smaller savings-based retirement pension   ~*~*~*~   Inept? Or clearly targeted?
Up
0
by Ms de Meanour | 13th Feb 13, 1:39pm 1360715952

Hm!  having had a closer look I realise that I was indeed misunderstanding the nature of FSC's proposals; in which light, I now don't think there is anything at all to be said for them.

That is because I don't think the public responsibility towards pensioners goes any further than ensuring that they don't fall into poverty - not that pensioners should be as well off as they can possibly be, nor that they should all be equal regardless of what they've done or what choices they've made before.

I really can't see where additional the incentive is in FSC's proposal.  It is already the case that the more you save, the better off you'll be in retirement.