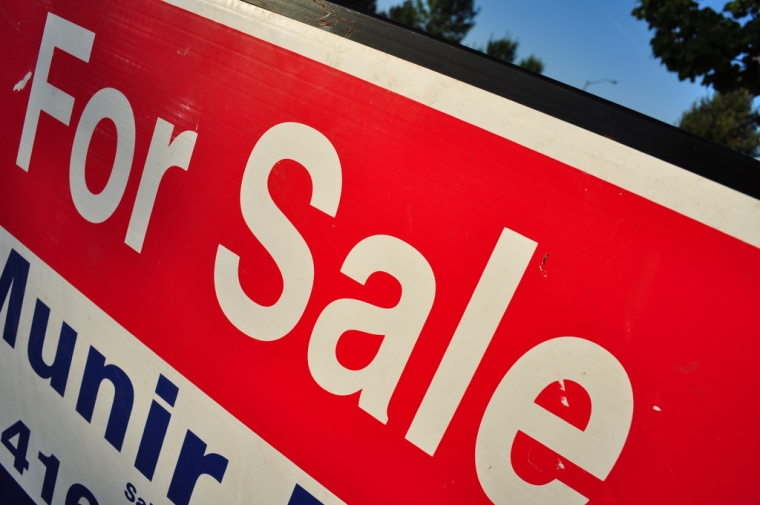 There was a significant increase in the number of residential properties coming on to the market in January, suggesting a reasonably buoyant summer selling season ahead.

Property website Realestate.co.nz received 7303 new listings from throughout the country in January.

That was down by 3% compared to January last year but an improvement on December's figures which were down 11% on December 2018.

The increase in new listings was particularly noticeable in several North Island regions such as Waikato where they were up 4% compared to a year earlier and Bay of Plenty +1%, Central North Island +4%, Hawkes Bay +6% and Manawatu/Whanganui +11%.

However new listings remained below the levels of a year ago in most main centres, with Auckland down 6%, Wellington down 8%, Canterbury -1% and Otago unchanged (see chart below).

And although there has been an improvement in listing levels since late last year, the total amount of stock for sale on the market was down 22% compared to January last year, suggesting supply remains relatively tight.

However, the shortage of stock does not appear to have had a significant impact on prices, with the national average asking price of all properties listed on Realestate.co.nz coming in at $689,864 in January, which was up 3% compared to December's average asking price of $669,468, but still below the highs of $700,000-plus that were achieved in February and October last year. 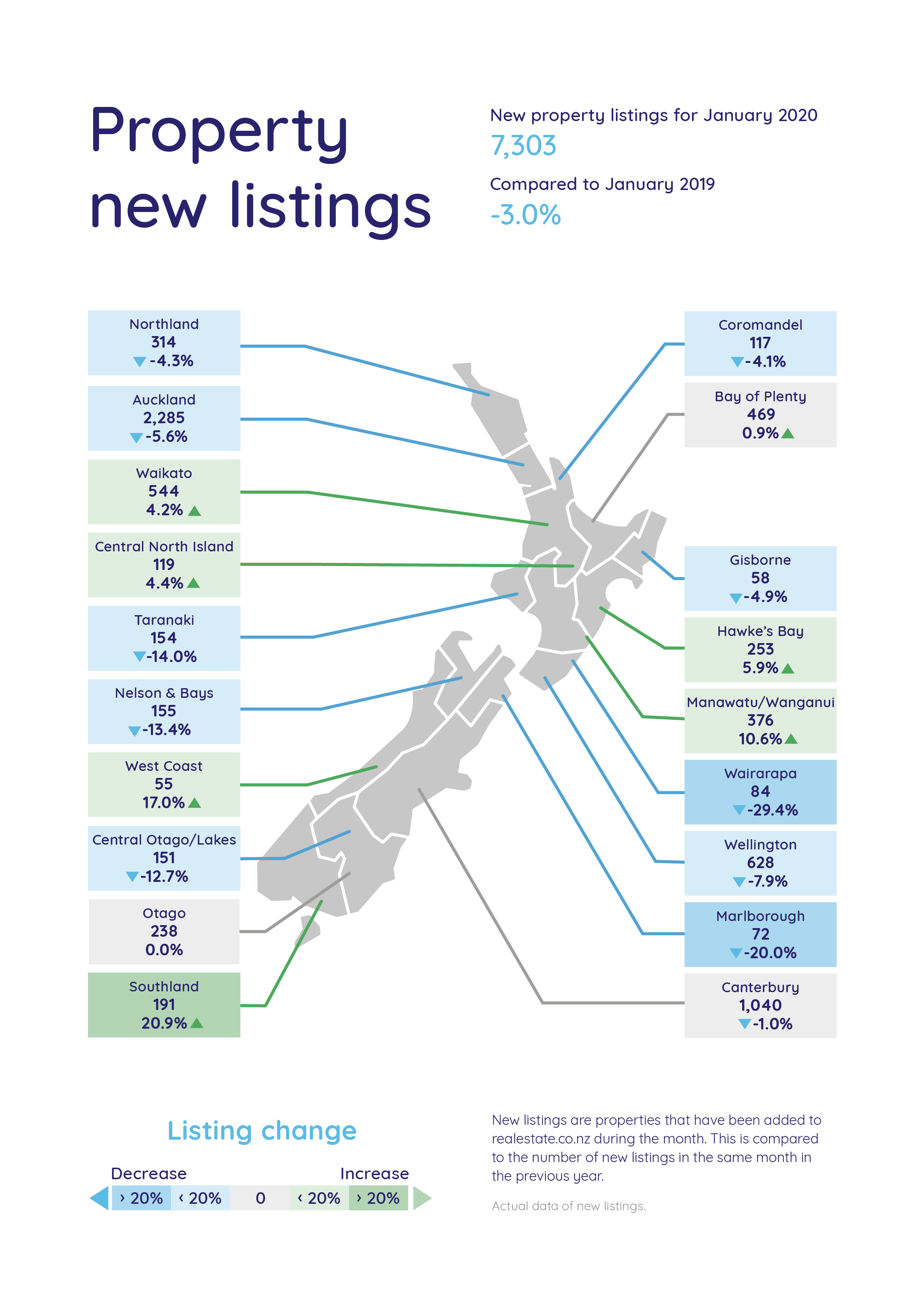 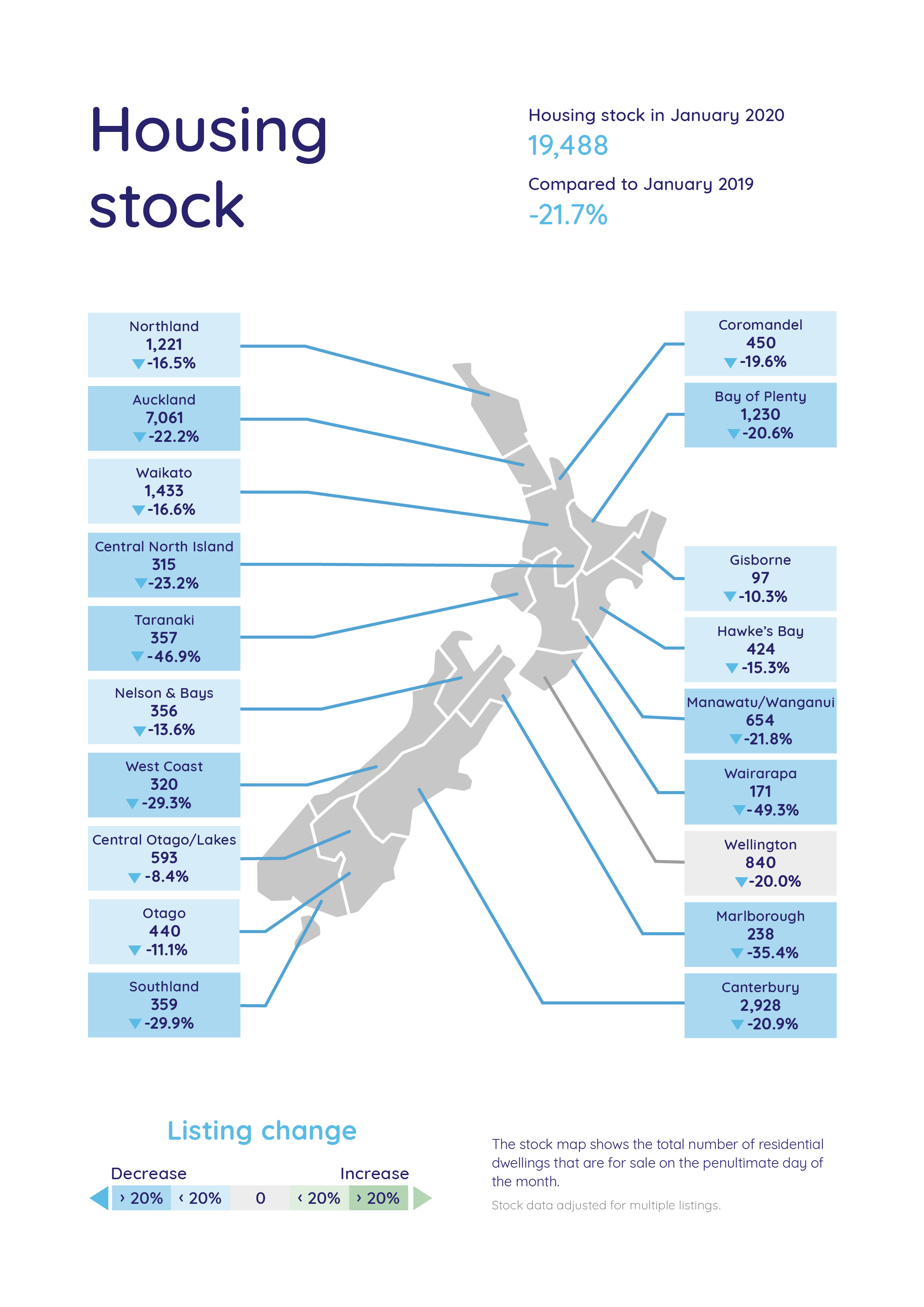 Would not have known this is really the bottom line from the headline: “the total amount of stock for sale on the market was down 22% compared to January last year”

It's looks increasingly like 2020 could witness a steadily strengthening property market - including in Auckland.

I hadn't been expecting a significant recovery for at least another year. But I defer to the evidence, which is getting stronger by the week.......

@taking the p*ss ..... you just keep your "rose coloured" glasses firmly fixed to your face and never take them off.
You truly have no idea, just keep "livin' the dream".
At the end of the day, all that really matters is what "you" think.....while I truly hope you haven't been "brainwashing" the younger folks out there, with less experience, with your mantra, you can NEVER lose with property.....

What's with the anger CH? TTP is right on the money, he is not using "rose coloured" glasses he is extrapolating for the data: "the total amount of stock for sale on the market was down 22% compared to January last year" read the article for yourself

No anger here buddy ...speaking from experience, as saw first had what happened in the Arizona and Maryland, USA markets from 2009 onwards - when house prices fell and people we're losing houses and "going underwater" with the mortgage worth more than their house. Also if you defaulted in the US, the bank would just basically throw you out and "repossess" the property and then write your debt off - but try getting another mortgage, as you have to build up your credit score again taking years, so you are back in the "rent trap" again. Here in New Zealand, the bank can go after your OTHER assets....OUCH !

While I have done well out of the US market with gross returns at 15% so fortunately I am on the "other side of the fence", while it has enabled me to freehold my Auckland property, so I am not a "DGM" and I do think property is a great long term investment, however speaking about the current Auckland market, it is totally out of whack and I wouldn't touch it with a barge pole.

So no anger here Yvil, just looking out for others - did that ever cross your mind ?

Hey TTP good to see you. Is it true the market rises everytime you post? Keep up the good work mate.

This headline is nonsense really
I only monitor daily the Rodney area but in December 2019 there were over 2600 listings which dropped away rapidly as listings expired for Christmas down to just 1990 in first week of January ( i don't see any way that 610 properties sold in Rodney in the two-three weeks of available trading).
The listing level stayed around 1990 until just this week effectively where it has now crawled back up to 2022.
Why those properties that were listed are not returning to the market is not obvious, to me anyway. But lots of things happening internationally that will affect NZ in very serious ways over time.

"The increase in new listings was particularly noticeable in..Bay of Plenty +1%"
When the highlights include a one percent gain they are trying particularly hard to find examples. Could be a different story if the virus takes hold but until then I prefer my corona chilled with a slice of lemon.

Houseworks, apparently sales of Corona beer are down because some people are mistakenly equating the name with the virus, so at least there might be some summer Corona beer bargains to be had. Can't say the same for the property market.

The wife says there was a Corona competition that got canned due to the association with the virus. Not sure if this was competition for the beer or the car but either way it shows people can be easily confused

Rodney District listings in December were 35% lower than year previous.
Auckland 22% lower.
Ageing pop (according to district look at) makes people less inclined to move.
Older people also more cautious re virus.
January sales will show increase on 2019 but February is where hit will be taken, and thereafter.

I doubt that REA's could blame caution over the new coronavirus for January's poor auction results, particularly for Auckland where auction sales we fairly pitiful.

they will certainly be blaming it in February when the Coronavirus exponential spread really kicks the number up, exports stall, jobs are lost, mortgage payments at any interest rate level start to come under pressure, a downward and very rapid spiral, just getting underway

@RCD ......they will be screaming over in Barfoots head office ..."at long last, we now have valid excuses" ! ....if the market does start going backwards.
Just concerns me, if things do turn to custard, what will happen to all those FHB's who have mortgaged themselves to the hilt ...I know of quite a few.
And how will the banks "react" ??? ..... then you will see all those "happy family" bank ads disappear from the screen, while your "smiley, friendly" mortgage broker will turn 180 degrees, to a monster to be feared, as the banks start chasing "their"money !!

Only an issue if you loose your job, otherwise why would a bank shut down its profit slave. Banks have shown a steady had in the GFC vs the mess they promoted in 87. Time will tell.

Not just first time buyers but those who have taken Advantage of lower interest rates and taken on much bigger mortgages in the hope that house prices with return to double digit growth.

Perhaps it was better to have happened now for FTB's rather than a few years down the tract where mortgage rates are close to 1%.

Meanwhile I keep getting emails saying properties on my watchlist have changed from auction to asking price...

We continue to live in interesting times.

The oneroof and Herald article statement regarding “standing room only” is a prediction from Campbell Dunoon.

CH; I'm looking at the actual auction results posted here on this site which show sparse AKL results for January, perhaps they were slightly inflating their headlines on "oneroof". And yes I agree with you that the new Chinese virus could be used as a good excuse by REA's for poor sales going in to the next few months. It will be interesting to see if it's more effective then the Foreign Buyers Ban.

I saw some wingnut proclaiming Coronavirus to be a left wing population control measure, so anything's possible.

Here's the link to the full report for those who want a complete picture:

1) Asking prices. meh, getting prices are what matters.
2) Not controlled for types of property being listed. No cheap and cheerful type houses being listed so average asking price goes up.

Once again, wait for decent data, namely the HPI report. Not this fluffy bit of noise.

I’m asking $10 million for my 3 bedder in the Wairarapa. Add that to the “asking prices” data.