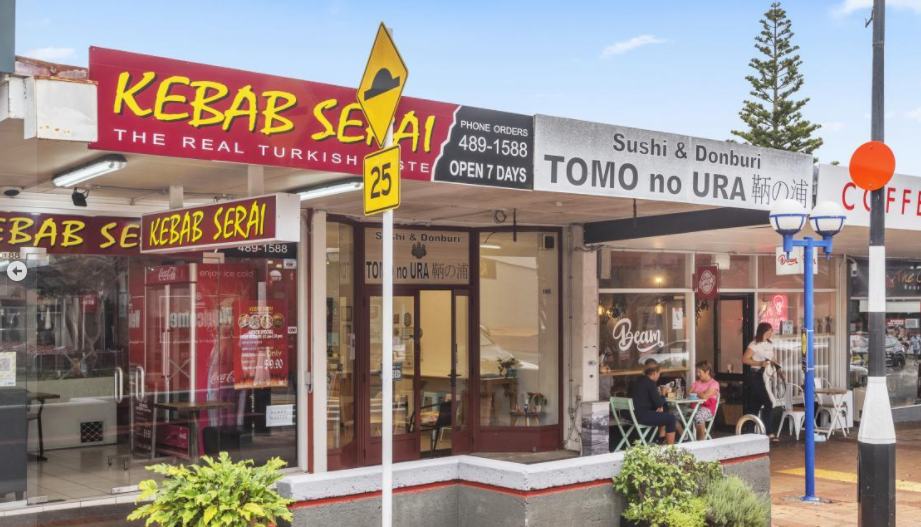 Bayleys' Auckland commercial auction on April 28 was one of the busiest interest.co.nz has attended for some time.

The auction room was packed with potential buyers for the 14 properties on the Order of Sale, which ranged from the ever popular smaller retail units, to some mid-sized development sites.

Two of the retail properties, both on the North Shore, were sold prior to auction and another lot, a block of seven apartments in a complex at Eden Terrace, was withdrawn, which left 11 lots to go under the hammer.

Bidding was ferocious on the first four lots, three of them suburban retail premises and the fourth a larger mixed retail/office complex with development potential at Oneroa on Waiheke Island, and all four sold under the hammer with yields on a couple dipping under 4%.

The standout was a retail premises on a 315 square metre site in the main shopping strip at Milford on the North Shore (see photo above).

The retail premises had been divided in two, with one leased to a sushi bar and the other to a kebab shop, which between them generated just a tad under $35,000 a year in rent.

According to Bayleys' marketing material the property had development potential, with the shops taking up less than a third of the 315 square metre site, leaving plenty of vacant land at the rear, which may have been why it sold for $1.795 million, giving its new owner an eye watering net yield of just 1.94%.

Another property that likely benefited from its development potential was a residential property at Red Beach on the Hibiscus Coast.

The house was probably built at a time when Red Beach was considered to be out in the wops and the standard section size was still a quarter acre (see photo below).

But it was located on the main drag which allowed for more intensive development and had existing consents in place for 13 apartments and a single commercial unit.

It sold under the hammer for $1.8 million.

By the end of the auction, eight of the 11 properties offered had sold under the hammer and another sold shortly afterwards.

Details of a wide range of commercial properties from around the country which have recently changed hands are available on our Commercial Property Sales page.

There'll be a lot of residential property investors turning to commercial now that the government has removed interest rate deductibility from the residential sector.

So these assets are just being chased up like everything else. It's an everything bubble.

Oh there'll be so much disappointment in the sector when investors find out harassing commercial tenants in NZ isn't as easy or fun as taking gullible housing tenants for a ride.

Many will miss that taste of young blood and tears!

Spoke to Tony A, he said brokers have seen a small switch only. Commercial is totally different to resi, not something someone new can take on easily

Agree commercial is totally different but if you do your research and due diligence it is easily achievable. I have no regrets making the switch.

Not surprise as with tax change more incentive to invest in commercial property than residentia.

Do they realise commercial tenants don't get WFF?

At least they might now leave our young people alone and perhaps maybe let them have a half chance at a home.

They might buy up all the high school and university supplies and lease these out to young peoples.
Then they could pat themselves on the back for enabling higher education while they suck the remaining soul out of the young.

I suspect many of these newcomers - unskilled leverage jockeys from the residential game - will get chewed up and spit out.

I have never owned residential but do have some commercial stock including a Countdown premises. It is not as easy as it looks. Like houses commercial premises need constant repairs and maintenance.

I agree. If it was easy everyone would be doing it. I am not suggesting everyone will, it will not take many of the residential investors to move over to have an impact on the number of commercial properties for sale.