Overseas workers in New Zealand down 17% from peak, with overseas student numbers down 40%

Overseas workers in New Zealand down 17% from peak, with overseas student numbers down 40% 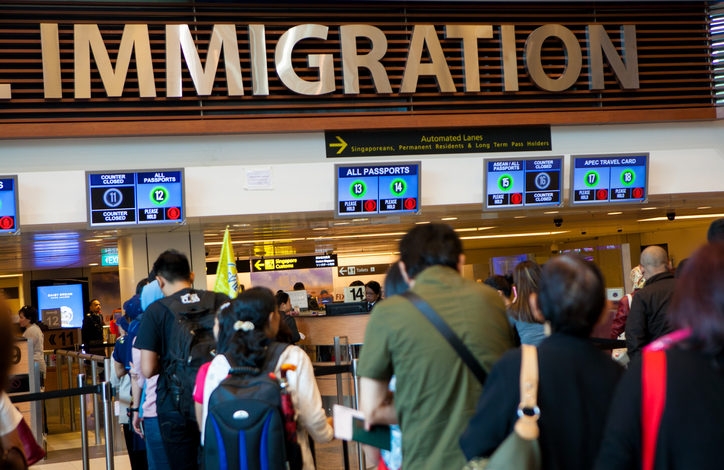 The number of people in New Zealand on work and student visas continues to slowly but steadily decline.

According to figures compiled by the Ministry of Business Innovation and Employment (MBIE), 184,416 people were in NZ on work visas at the end of May. At the same time there were 51,891 overseas students.

Both numbers have declined significantly since severe border restrictions were introduced last year as part of the Government's COVID-19 pandemic response.

That's a combined reduction of 71,013 fewer people from overseas working or studying in NZ.

However as the graph below shows, it has been a gradual decline rather than a sudden slump.

The reductions have taken the number of work visa holders in NZ back to where they were in October 2018. Student visa numbers are at their lowest level in any month outside of the Christmas/New Year period since MBIE began collating the figures in their current format in 2008. 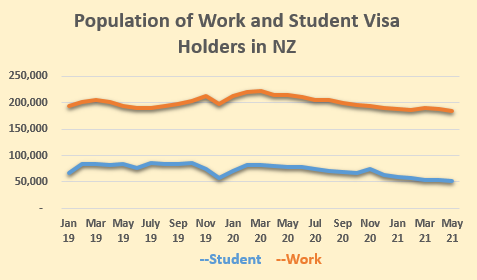 On the radio this morning Magic hosts and company were arguing that low wage migrants were good for the economy as wage suppression stops inflationary pressure lol. What a country we live in right?

Ummm, so lets start letting in some radio hosts that will do their job for minimum wage and see what they think.

There is, after all, a shortage of such radio hosts.

That's clear rational thinking. And it leads to the conclusion that the reintroduction of slavery is fine because it would stop inflationary pressure.

The underlying idea is some jobs are so crappy that we will reserve them for desperate foreigners.

Yes there is inflationary pressures but so what. Wages have been suppressed for years now because of cheap labour from overseas.

Sadly border closure is only delaying the equilibration upon reopening. ImmigrationNZ are still approving applications.

Would be interesting to know how many of those 221,256 transitioned onto residency visas during the period – assuming that’s how the process works.

And it would be interesting to see the numbers of residents transitioning into citizenship. As in 2019 there were 44,413 new citizens by grant, but 31,870 in 2020. I wonder if the downward trend has continued. Processing times have sky rocketed (from 4 months to up to 14 months), so it would imply more are applying.

I bet there's a big surge in citizenship applications. The driver will be the wedge that was driven between permanent residence rights and citizenship rights when the government slammed the door on PRs but not citizens. It used to be that the two were almost equivalent (except for rights to move to oz). But in the new regime, people who were previously eligible for citizenship but didn't see the need... many will now see the need.

having been a PR for 15 years now i am one of those that is in process of gaining citizenship - and know of several more people in my situation doing the same -
thats despite never having left these shores since i arrived and dam sure i wont be doing it anytime in the next few years!

Wise move. BTW when you become a citizen you have the opportunity to deal with the only govt body that is not only top class but is also a pleasure to deal with: the NZ passport office. Think of INZ and then contemplate the exact opposite.

having been a PR for 15 years now i am one of those that is in process of gaining citizenship - and know of several more people in my situation doing the same -
thats despite never having left these shores since i arrived and dam sure i wont be doing it anytime in the next few years!

I took out citizenship in 2017 for 2 reasons: The first was getting sick of the constant scanning of baggage at Auck Int Airport (I travel 4-6x/yr). The change in processing since I used a NZ pass port from my UK equivalent is outstanding. The 2nd reason was NZ Super. As a taxpayer for 30+yrs, I'd be dam annoyed if superannuation was declined to permanent residents.

How is it possibly so low? Most visas are for between 12 and 24 months so I'd have expected at least half of those people to return to their country of origin.

The fundamental problem with immigration that I have witnessed first hand is the flawed path that starts as an English language student and ends as a citizen with zero need to secure a skill shortage role that a local could easily do. I know of immigrants that complete a Marketing degree then work serving in a fish shop because they can’t secure anything in their area of study and somehow still manage to get residency....then the elderly parents get residency and pension and somehow this person still adds up to a net fiscal positive for the country ???

If you say anything against this you will be labelled a racialist.

It would be nice if the figures made clear how much of this sort of conversion is actually going on. The problem is that the xenophobic line is to assert that it is pervasive, and it's very difficult to tell from the stats one way or the other.

Some immigrants work hard and use exceptional skills and are rewarded by generous salaries. The good immigrant who is beneficial to NZ.

Some immigrants may work hard but do so at low paid work and displace work opportunities for low skilled Kiwis. The immigrants who hamper NZ, are involved in worker exploitation and associated business rorts that reward the dishonest business.

That is fairly obvious and of course many like myself are somewhere in the middle. It would easily be proved if immigration visas were matched with IRD tax returns then we would know what is really happening. Several years ago I wrote and asked an immigration minister why they didn't do this and was told it was against the privacy laws. (My reason for writing a letter was in reference to two immigrants being jailed for drug smuggling - they had been resident for 9 years and never made a tax return.) Surely it is an obvious check for both INZ and the police and IRD but I guess NZ govt does not want any failures identified.

I won't be disagreeing as I have seen this for myself. Parental visas need to be a thing of the past.

This problem seems to have been amplified around 2012/13 when the then National government allowed international students to work while studying in NZ, and the period 2012ish to 2017 when new residents with minimal earnings were able to import their parents (and sometimes siblings) into NZ.

Prior to NZ opening up again, perhaps the right for international students to work should be removed. This would assist in identifying genuine (paying) students and weed out many of those coming primarily for residency.

INZ is crazy. They fall over themselves to effectively subsidize foreign owned training establishments taking in foreign students to study dumb subjects at a pathetically low level. Meanwhile the 15 years old Vietnamese girl who has already completed a degree in pure maths at AUT is rejected because she is too young to study for her PhD. I'm a strong believer in cutting immigration however for that girl they should be laying out the red carpet. I'd sweep it myself.

Exactly, remove automatic work visa for students and see who genuinely come here for education. If they don’t want to come here, that’s fine. Universities will scream but their first and foremost duty needs to be to educate NZers. Not pine hopes on international fees.

Labour party's decision to provide automatic 2+ year work visas to all international students upon graduation means those grads and their families become fully covered by our public health system to the same extent as NZ citizens are.

As if the system wasn't already struggling with capacity, funding and quality issues.

To be fair the elderly parent visa was killed off a few years ago. It was just another random, non-discussed, arbitrary policy shift by INZ that must have caused plenty of misery for those about to apply. Personally I've no problem with elderly parent immigrants so long as they are not working and are financially sound - bringing with them full health insurance and a meaningful pension. Most will live with their recent immigrant families so they will not be impacting our housing shortage. My same liberal attitude does not apply to low paid immigrants particularly when they have arrived via a meaningless student route - why is our govt using immigration as a means of subsidizing tertiary education and especially PTEs (Private Training Establishments).

Most of the immigrants I know are educated and don’t necessarily have a higher living standard here because they’ve come from wealthier countries where they would earn more. Then again, I’m not going to pretend that that is the reality for all immigrants who have come to NZ.

as anyone other than orchids noticed these missing 36000 workers?

So... GPD up and population down? GDP per capita increasing with less immigration?!
Gasp!

You do realise the GDP increase was Government spending and we now have less people to repay the debt?

Our whole economy is based on running up massive debt and passing it to following generations to pay for.

I read Michael Barnett’s piece in the paper.

And take some responsibility for encouraging an economic model where nearly every industry has become reliant on foreign labour.

Maybe we could close the shops at twelve on saturdays and all play sport in the afternoon.. sundays too and see the family.Have we ever tried this?

Oh we need to repay our debts... bugger

One of the old neoliberal dinosaurs.

We are going to grow our economy with a flat-to-shrinking population, while decreasing national debt.

Somebody said here once that if you bring your elderly parents in here and then depart. If they are not eligible for National super they get an "emergency benefit"
1. Is that true?

I read the NZIBF statement about immigration and how all our industries are screwed without staff... interested to know who they were it didn’t take long to find out
Have a Google .
Business NZ, the banks and aquantiences.
Expect a barrage of daily cries from the EMA, the Chamber,the banks, twenty other similar sounding umbrella organisations and National.
It’s a bugger when the market works in the people’s favour.... not supposed to work like that old chap