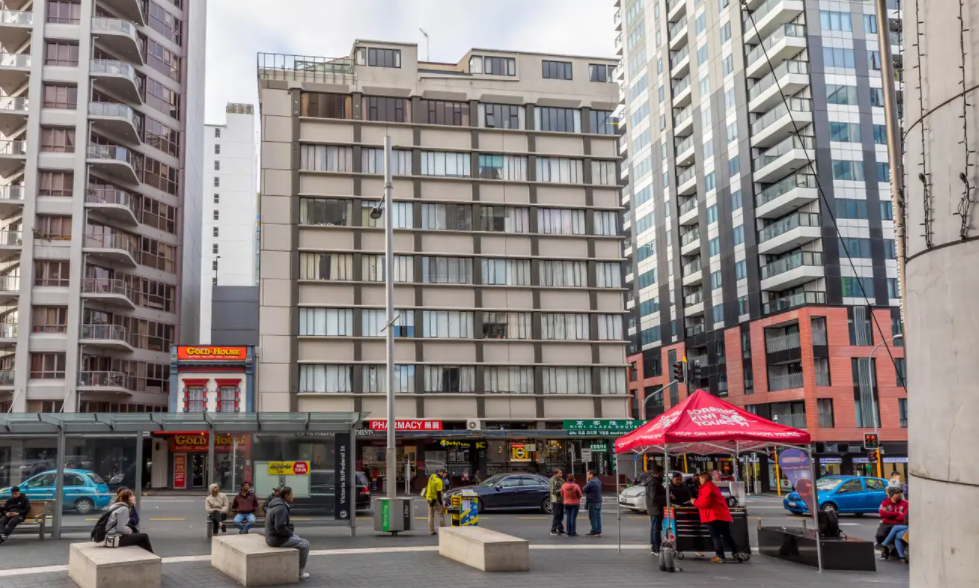 A two bedroom apartment in the Victoria City building opposite the casino sold for $245,000.

There was a surprisingly strong result at the latest central Auckland apartment auction, suggesting this part of the market may have taken on a new lease on life.

Auckland's inner city apartment market has been hammered by the onset of the COVID-19 pandemic, particularly the smaller units that are often rented by overseas students, with many suffering major declines in value.

While the larger units popular with owner-occupiers haven't been as badly affected, they have largely missed out on the big price gains evident in the overall residential property market in the last 12 months.

But there are signs the market may have started to turn.

At Ray White City Apartments auction on June 24, nine apartments were offered and eight sold under the hammer, with competitive bidding on all eight that sold.

The apartments on offer were a good mix of smaller units and larger, better quality ones, which attracted both investors and owner-occupiers as potential buyers.

The first offering was a 35 square metre studio unit in the Connaught building located just up the road from the High Court.

This has been a popular complex but is facing significant remediation issues and that has seen many owners decide to sell up, with their units often selling for around half their rating valuation (rating valuations in Auckland have not been updated since 2017).

However there were multiple buyers chasing it and it sold under the hammer for $176,000.

A slightly smaller (32sqm) one bedroom unit in the Queens Residences building on Airedale Street, which had a rating valuation of $530,000, also attracted multiple bids and sold under the hammer for $480,000.

However not all of the units went for marked down prices.

A two bedroom unit with a car park in the Volt building on Queen St, which is popular with investors, sold for $417,000 compared to its rating valuation of $390,000.

Anecdotal evidence suggests the high sales rate at the auction was the result of two main factors.

Firstly,  vendors are accepting that there has been a change in the market and are being realistic in their price expectations, and secondly, buyers are coming to the view that prices for inner city apartments may have bottomed out and are less concerned about potentially losing money than they may have been a few months ago.

Details of the central Auckland apartments offered at all of the auctions monitored by interest.co.nz, including their rating valuations and the prices achieved, are available on our Residential Auction Results page.

Once the market turns it will Not Be Fair.

I told you so!

No prize for being right and hate to be so.

Be quick, secure your financial future today- it won't be long before it'll be out of reach especially for FHBs and new investors!

And yes, buy everything and anything, there won't be enough (and never will be) on the market in our lifetimes in NZ- and that's a certain.

Yep - it’s been a very soft landing for the apartment market…… The buying frenzy appears to be back already.

The truth is that ordinary people are desperate to get a footing on the property ladder - but they’re competing with investors who are forever eyeing up opportunities.

On the supply side, owners are reluctant to sell - even owners of grotty little sh_tboxes.

It’s a sad state of affairs……

Buying frenzy? Or apartment owners are capitulating? Methinks you didn't read the article.

Are you for real, really? How many of you there are BTW, on a daily basis we get the typical STUPID FOMO comment which I hope nobody will listen to. We have a bad enough situation in this country regarding housing to have the likes of you spreading FEAR across young people in need of a house. Please.

Sample size of 9 units is too low for any firm conclusions. It would be much more interesting to look at a 4 week moving average (of Ray White City Apartments auction results).

Exactly, this article is jumping to conclusions when the future is pretty uncertain, especially for investors and FHB.

lets do the timewarp again,abandon your pokey tenement in glasgow and fifty years later compete to buy one in auckland.

Looking at the wider housing market, I noticed that 10 out of 11 properties were passed in at the 10am Barfoot Auckland Central auction rooms session yesterday. Is this the beginning of the end or just an outlier?

Something odd for sure about that, not a single bid on any of them, the one that sold was a pre-auction offer by the looks of it. I looked at their auction results earlier in the week and the sales rate was high, probably 60 -70% for the main auction rooms.

"vendors are accepting that there has been a change in the market and are being realistic in their price expectations.... potentially losing money"

All of the DGM who were calling for a reset aka fall in property prices, should be lapping this up and laughing at their good fortunes. Sadly most will still be grumbling and complaining

Haven't you seen the calls for a 70% drop?The only home they'll own at that rate is a pine box with 6ft of dirt above it.

Interesting how your comment is diametrically opposed to the text you quote, could you not find anything supporting it better? It may seem the DGM you so vehemently criticize might be right after all.

I suspect the author meant to talk about the very next property on Interest's auction tracker, incidentally sold by the same agent - a 2 bedroom unit in Eden Terrace with an RV of $650,000, which sold for $810,000.

Although the numbers are the same, the market in Eden Terrace is very different to the market in Auckland CBD. I don't think the spirit of this article holds up, with only one of the eight examined properties actually selling for more than RV.

Awh bless you think the RV has any tie to property value when it is simply an area marker for rates to be tied against that are meant to stay relevant a few years into the future. Given market shifts in the area and city at large the RV is often set far too low and is continually playing catch up. Even RV staying relevant in 1 year is a joke with new developments around the city.

I wasn't suggesting that the RVs are too low. My point was that the author quoted the wrong prices when talking about the Vogel Lane property, which makes it falsely appear that this property sold for significantly higher than its RV. The Vogel Lane property actually sold for less than its RV - and this significantly changes the narrative of the article.

If anything, your point reinforces mine. All except one of the properties in this article were sold for less than their RV. If RVs increase, as you suggest, then the "gap" between the value used to calculate rates and the price paid by the market will grow ... contributing further to a crude measure suggesting that purchasers are "underpaying" for apartments in the CBD.

The question that should come out of this article is: why are apartments in the CBD selling for LESS than their 2017(!) RVs while properties in the rest of the city are generally sold at prices higher than RV (accurately reflecting that house prices have increased since those RVs were last changed).

Of course RV is tied to property value, it is by definition an estimate of market value at the revaluation date, with the normal disclaimers relating to mass valuation. Just because a market may have moved significantly since the revaluation date doesn't uncouple the relationship.

Anyone who uses a RV as a basis for relationship to value will be almost always misled . The only thing reliable about RV’s is their unreliability. They are computer generated mass appraisal assessments for rating purposes .