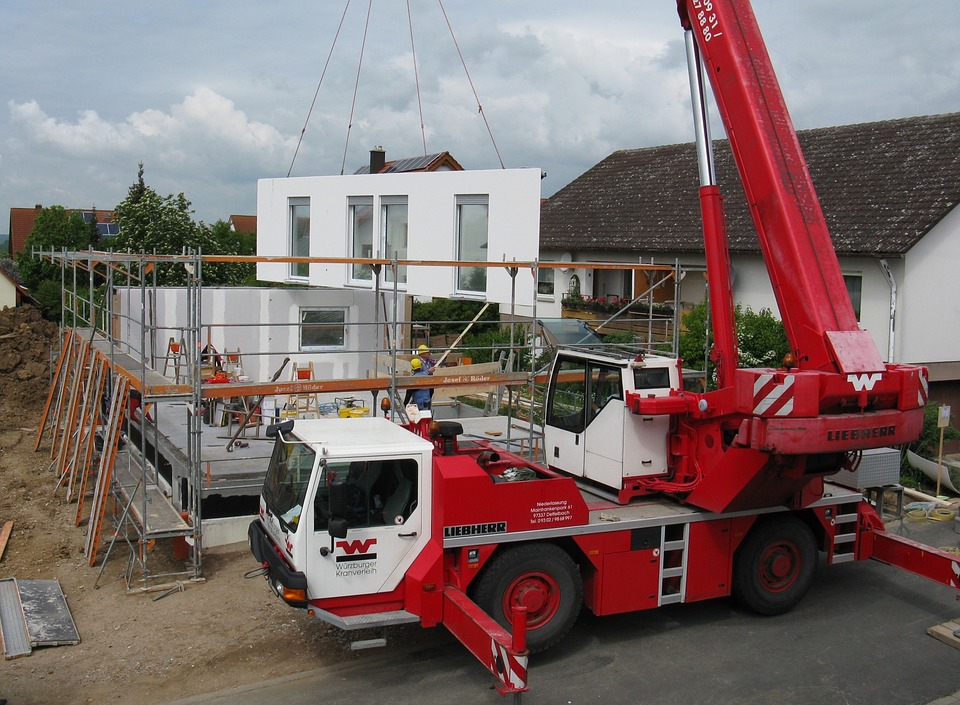 There was a big drop in the number of new homes completed in Auckland in September, but it's too early to say if it signals a slowing in residential construction in the city.

Auckland Council issued 776 Code Compliance Certificates (CCCs) for new dwellings in September, down from 1173 in August and 1137 in September last year.

It was also the lowest number of CCCs issued in any month since May last year.

Code Compliance Certificates are issued when a building is completed, so are a better indication of housing supply than building consents, which are issued before construction commences.

Over the 12 months to the end of September an average of 1151 CCCs a month were issued in Auckland, so September's figures were well down from that.

However it's too early to say if the drop was a one off or part of a longer term trend.

Auckland's monthly figures can be volatile because of the relatively high number of large, multi-unit developments being built in the city, and the timing of their completion can have a significant impact, either up or down, on the monthly figures.

September was also the first full month in which lockdown restrictions were in place in Auckland this year, which may also have affected the numbers.

The chart below shows the monthly dwelling completions in Auckland since September last year. 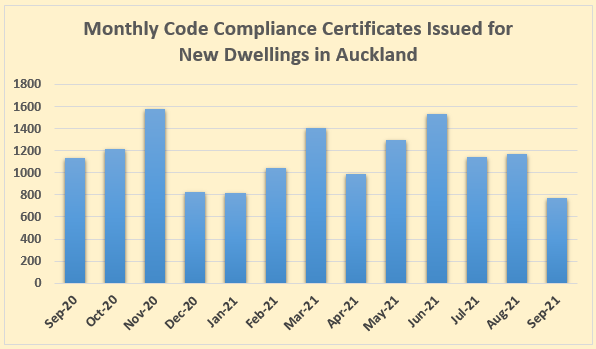 Yep, too early to call on one month of data, but it's going to trend down.

There is a very strong historic relationship between rising interest rates, slowing house price growth and rates of housing construction.

Stuff article today. Supplies running out. Truss, framing, steel mesh etc  orders simply being cancelled. Fixed price contracts impossible. There it is. Builders can’t build if ain’t got anything to build out of can they.

Lots of headwinds converging for construction. Challenging times now and looking ahead.

Its also demand=supply so the build rate is self regulating anyway. People seem to think we are going to end up with a housing glut and prices will crash, its never going to happen. If building materials only keep getting more expensive, the finished house prices are only going one way. If its not one thing its something else, house prices will continue to rise.

A huge number of building projects across the country are being thwarted by shortages of building materials and skilled tradespeople.

Most building projects are being delayed - and being completed well outside anticipated completion dates.

It's a major concern to builders and their clients - especially because delays cost big $$$.

The disruptions are "transitory".

What's really going to scupper the building industry is the incoming credit crunch colliding with their bloated price expectations.

Hit the nail on the head.

I was speaking to a builder a few weeks ago and he wasn't having any problems with supply. But he said that the key is planning. Many builders don't plan and expect materials just to be avaliable.

Having worked on the supply side of this for 30 years, I can tell you a large percentage of tradies are ridiculously disorganised. Great trades people but not great business people.

Well not surprising really as the trades don’t exactly attract the sharpest tools.

Having said that if you’re reasonably smart you can rise to the top with your own business and do very well quite quickly.

Same here - spoke to AKL builder friend 2 weeks ago and he said they are managing to get enough materials for now.

Supply shortage and raising rates, not really fun trying to build in this environment, just spend time and do something else enjoyable .

As the price of new builds creep up due to building costs ie lack of materials and high land costs….

Renters appear to be pretty much tapped out. Do the numbers still make sense for investors on new builds? I’d say it’s a risky one to buy at the moment unless you are mortgage free on the investment.

Lucky if you get a gross yield on new build townhouses of more than 4%. That will be even less attractive as interest rates rise.

NZ'ers  enthusiasm for property will rage on.

The housing market will cool off for a while - but don't expect any crash in house prices.

As tough as things might become, people will fight to hold onto their houses - and the vast majority will succeed.

People "holding on" and prices dropping are not mutually exclusive.

Surely the level 4 lockdown just the prior month has something to do with this…… no construction happens during level 4.

Any talk of a trend is extremely premature given the above.

Surely that’s a massive part of it - weren’t we in Level 3 (with no building) for 60% of September? I would have expected this.

Edit: Auckland was in Level 3 until last week of September.

Auckland was in level 4 - no building- until last week of September. Shifted to level 3 on 22 Sept.

This is good news for house prices.

Inflationary pressures and dwindling incentives will ensure supply is constrained. This may be the start of another long term cycle of upward valuation for existing properties.

Of course you are *partly* right. Escalating build costs and slowing supply will not help affordability.

But you have forgotten to mention dwindling demand, the other side of the equation.

The theatre of aggregate demand- it's not all just about FHBs and investors.

This is good news for people who own multiple houses only.

That's why people should learn to be part of the good news.

Owning only 1 house is not only risky when the market is moving up, it's also risky on the way down.

You never just own 1 and everyone should have at least 2.

Not everyone has that opportunity. As you've said before, the door is closing, "be quick", etc. Youth born without the luxury of landlord parents aren't so fortunate.

"Everyone should have at least 2", what planet do you live on mate! Ridiculous comment.

Some people on here simply like the sound of their own voices, with zero consideration for anyone else's situation.

Ignore him, he's a troll

'everyone should have at least 2.'

It's worse than that. If everyone owned 1, then there would be no rental market and any extra would be sitting empty.

It's hard to know whether he is being intentionally funny or is just funny.

Many people have have just two houses. Three or four is preferable.

By the way, be sure to take no mercy on your tenants. Squeeze the peasant class on rent till it hurts as can’t ever have them save enough money to become owners. Show them who the lord of the land is.

CWBW.. I fear you may be right on the constraint of supply having upward pressure on existing homes. Hopefully the upward pressure will be short lived before some sanity returns. A lot of reasons to be cautious at the moment.
It all boils down to your reason for buying, if it’s for a quick dollar or a speculative punt… no

if it’s for a home to live in for years to come.. yes

Why do you always want to be quick?  Is it some kind of anxiety with being a coffin-dodger?

Look at where being slow gets you Brock. That's a valuable lesson for everyone.

Being slow for what? Where does it get you?

Speaking in riddles is a sign of cognitive impairment.

Remember this?  A couple thinking they need to defend their mansion with guns:

The more the "winners" win, the more "losers", paranoia and anger.  This is the direction Be Quick is taking us.

Grow some veggies or do something else worthwhile, CWBW, rather than trolling for fun.

Even Darcy Ungaro over at Granny Herald is sounding bearish on house prices, at least in the short term.

Since covid I'd say completion timeframes have easily doubled, and it's getting worse. Supplies are patchy, and there isn't the labour so everything is stretched super thin.

On the flipside, there's a crazy amount of work in the pipeline, I'd imagine anyone half decent will be run off their feet for the next 12-18 months easy.

Just been out for a walk in Auckland. Looks like PLENTY of new houses being built and/or finished to me. Just an observation.

Based on all the comments I read on the website, it's not a supply issue, but an interest rate issue.  So now's the time to put it to the test.  Interest rates are rising, construction is slowing.  Let's see if their 'wish' of a housing price crash happens.

From my perspective, the slow down of residential builds will only mount to the pressure of prices and rent increases.  Just wait until the borders open.

September was also the first full month in which lockdown restrictions were in place in Auckland this year, which may also have affected the numbers.

"May have affected the number???"  Lockdowns level 4 with no construction for 3 weeks in Sept did for sure have a big impact on the lower number of CCC

In our extreme world we have lots of extreme issues & lots of extreme solutions it seems. Even extreme responses to the expected extreme issues [like RB guv LVR decision in May 2020] are appearing, which dismay's me somewhat. Sigh. Things are booming once again in Auckland, however. I have a good friend involved in the latter stages of new builds & he has been rushed off his little diggers, to the point were he needs new staff. Sound familiar? But once again, extreme, locked down & doing nothing [extreme] to back to work & rushed off his feet [also extreme]. Why can't we just cruise through this at a moderate pace while all doing well? Why does everything we do have to be extreme?

Hope he's putting some $$ away for the rainy days that are coming.

Silly headline because of the lockdowns. Oh look there are some ads.