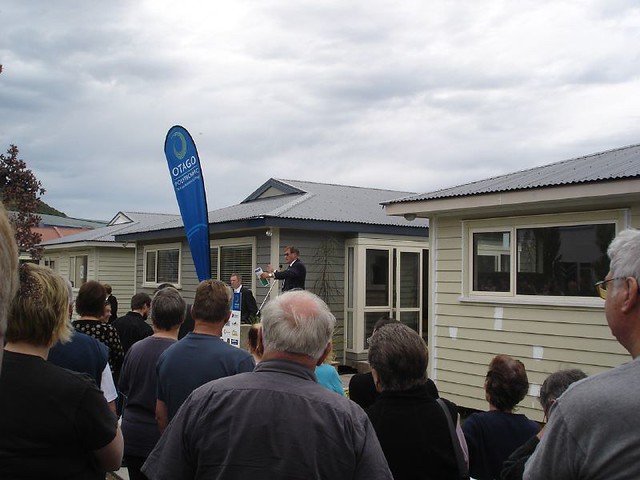 Auction activity continued to pick up around the country last week as the housing market entered its busiest time of year, while the sales rates remained relatively steady overall.

Interest.co.nz monitored 386 residential property auctions throughout Aotearoa last week (12-18 February), up from an average of just under 300 a week over the first two weeks of February.

However while the number of properties being auctioned increased last week, the sales rate was flat, with the national sales rate at auction barely changed at 41% compared to 40% in the first half of February.

Within the Auckland market, which dominates auction activity by a substantial margin, sales rates ranged from 25% for properties in Waitakere and Papakura to 55% in Franklin.

One sector of the market that has been particularly hard hit over the last two years is the Auckland CBD apartment market, which is particularly reliant on overseas students.

According to data from the Ministry of Business Innovation and Employment, the number of overseas students in New Zealand has halved over the last couple of years, declining from a peak of 86,000 in October 2019 to just 43,000 in January this year.

That has had a flow on effect in the Auckland CBD apartment market, especially for the smaller units favoured by students, with vacancy levels rising and a corresponding drop in rents and capital values.

The sector is dominated by investors and there was some good news at the CBD apartment auctions attended by interest.co.nz over the last few weeks, with most properties attracting bids, suggesting investors are still active in the market.

However in most cases the auctioneers struggled to close a deal under the hammer and the average auction sales rate over the last few weeks for this type of property has been 31%, suggesting investors are remaining cautious while some vendors may have unrealistic price expectations.

However there has not been a flood of this type of properties onto the market either, suggesting most owners are prepared to sit tight and ride out the storm, for the time being at least.

The recent announcement that the Government would be  easing the way for 5000 international students to enter the country later this year does not seem to have affected market sentiment yet.

The table below shows the average sales rates in those regions with the highest levels of auction activity last week.

You can see the results for the individual properties offered at all of the auctions monitored by interest.co.nz on our Residential Auction Results page. 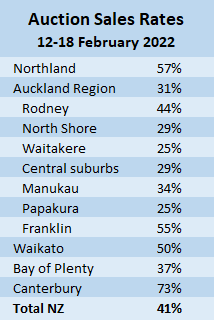 So with the exception of Christchurch, dead. Got it.

It all points to an orderly winding down in activity - soft-landing for the housing market.

Those anticipating major changes in house prices (downward or upward) will need to adjust their expectations.

Predictions of a flaccid landing are quite premature.

Mmmmm lets see, Covid going wild, interest rates confirmed to rise, inflation set to rip, War in Ukraine but it appears Kiwis are still buying houses. If this is the bottom I would hate to see a boom.

Predictions of a flaccid landing are quite premature.

Use of the word "flaccid" is quite immature.

A lot of water to flow under the bridge yet.

So with the exception of Christchurch, dead. Got it.

How are these agents still able to convince vendors to go to auction?

Listen carefully to what real estate agents advise - and do the opposite.

So if an REA tells me that this is the best time to buy...

Depends...how much has the Reserve Bank inflated the price of vowels?

As per data analysis, if 41% is not good then it is now bad either.

The market is steady and that's what the only mandate of labour is.

Auckland looking as sick as a dog.

So are most of the people still living there.

Not long until it rips through God's waiting room.

Auckland looking as sick as a dog.

Is the  total NZ % the total national sales divided by total national lots or is it an average of the individual sales rooms % sold rates. These figures would not be the same.

Sales rate or auction rateis not an important factor in current scenario is market. What is important to know is how many houses are sold at prices above the council valuations.

Are vendors asking price realistic yet or not?

With the news of interest rates going up and house prices declining in the future, if anyone is paying anything more than what the valuation of houses was before the pandemic and RBNZ did their tanter tantrum would be a big mistake. The only justified price to pay now is the one for eye houses were valued in December 2019.

Anyone paying above that will be responsible for their own actions, don't come crying to government when it all hits the fan.

As Greg points out, auctions aren't so popular around most of the country, but here's some stats from Bayleys auctions over the past 10 days outside the areas in the table:

Whanganui auction is 1:55pm today (3 lots), Havelock North is tomorrow at 11:55am (6 lots), both of which will further lightly inform the picture of where the regions are heading, with Whanganui being a recent boom town and Havelock North being an aspirational destination for bigger city escapees.

Personally I look not just at the sales figures but at the type of property sold/passed in, and for how far above/below estimates.

I don't work for Bayleys (I think I know someone who does) and I'm not inclined to post a link, but I trust interested observers are smart enough to be able to Google upcoming sessions and session results.

Given how much international students have fallen away, 5000 is a drop in the ocean. In Auckland the university has also been building a whole lot of student accommodation

Over 29000 houses on trademe today up 5000 in two weeks interest rates climbing, inflation up FED set to raise rates and start to reduce balance sheet the whole system is going risk off,and nothing more riskier than a 1.2 million 3 bedroom box on a tiny piece of land in Auckland. why are people buying with this environment it obvious the whole market is going to take a tumble.

Especially if you are surrounded by 10 -20 identical boxes. If one of you is forced to sell for what the market will pay. Then there is price discovery for every other potential buyer of a box in the block.

All said and done this is not the time to buy. My mother is in the market for a house and my advice is hold tight for a few months. Of course the problem with our lot now is not so much buying the house its finding and  buying something you can actually get excited about and this becomes the hardest part.

you may regret that advise !!!

Have you changed your mind Carlos on house price trajectory ? (which is perfectly fine)

Not good indeed although there are always exceptions, a house in my neck of the woods sold last night for $4.25 Mill, way above CV

Wow  that's pricey for Timaru! Mansion on a lifestyle block?

I live in Auckland

That would be a big 2 bedroom garage then?

Oh ok, you have been going on a lot about Timaru, and I thought you sold your house.

How big is the section, and is it in the Ponsonby area where you used to live? If it's bigger than say 600 square meters there's every chance a developer might have bought it, looking ahead to the likely zoning changes coming and building townhouses or apartments.

The section is 336 m2 in St Marys Bay, not really for a developer.

Oh OK, it's not really anyone's business, but you did seem to be going on about Timaru an awful lot as if you lived there.

I thought you own investment properties, you talk about them as if they are a one way bet.

Well, yes that's definitely too small for a re-development really, must just be someone with plenty of money

Yes I do own investment properties, residential and commercial, the fact that I own a "real" business (actually 3 of them) doesn't mean I don't invest in properties

A house, or a bit of land for cramming townhouses onto?

No other Bayleys properties over $4M in yesterday's auctions, so I'm guessing it was the former? FWIW I don't think it's surprising at all that properties in Auckland are going above a nearly 5 year old CV.

No one (very very few) at Harcourts Tauranga this morning.

I think I would take a pass sitting in a room with Covid floating about, especially if your just there to watch and have zero interest in actually buying anything, why would you bother ?

In the past 30 days, 20 properties have come onto market and 22 have been sold in my little beachside town (east coast Coromandel). One of the two extra being a neighbour which sold the day of its listing. In spite of everything the demand for holiday homes up and down the coast around here is still huge and so are the price tags.

There is still room for upward valuation.

May I ask why you think this? Nothing against you - I’m genuinely curious.

When prices fall, there will be even more room for upward valuation.

No worries about all this stuff  .....the "astute property investor" has ALL the answers .....once covid is sorted, the immigration tap will be turned on, more fodder for sales and renters alike ......large companies will attract high worth/highy skilled individuals from overseas, so that covers the more expensive market, both for renters and sales .....no worries about interest rate rises and these will be happily paid by the renter, ably assisted by the Government if a top up is required, through the taxpayer funded  Accommodation Supplement.....if there is a downturn or even a crash (can't see that happening, as we are immune from world events) but if it does, the Government will step in and generously add further tax payer money via the Accommodation Supplement, for the renters who may find themselves out of work etc) so rents are "Government Gauranteed" :)

And here's the kicker folks  - if prices do decrease, we'll just pick up those bargains for our portfolio.

It truly is the best welfare scheme.

The "astute property investor" does not need house prices to go up to make money.

Exactly Yvil ! .....as per my line in the post   -"And here's the kicker folks  - if prices do decrease, we'll just pick up those bargains for our portfolio"

Is NZ for astute property investors, or is it for normal everyday NZers who want a roof over their heads and a future for their children and grand children, to be able to enjoy life in NZ as we did when we were young.

swapacrate.....just saw your post .....don't worry, as I was being sarcastic and playing "devil's advocate",  as I totally agree with what Spock says :)