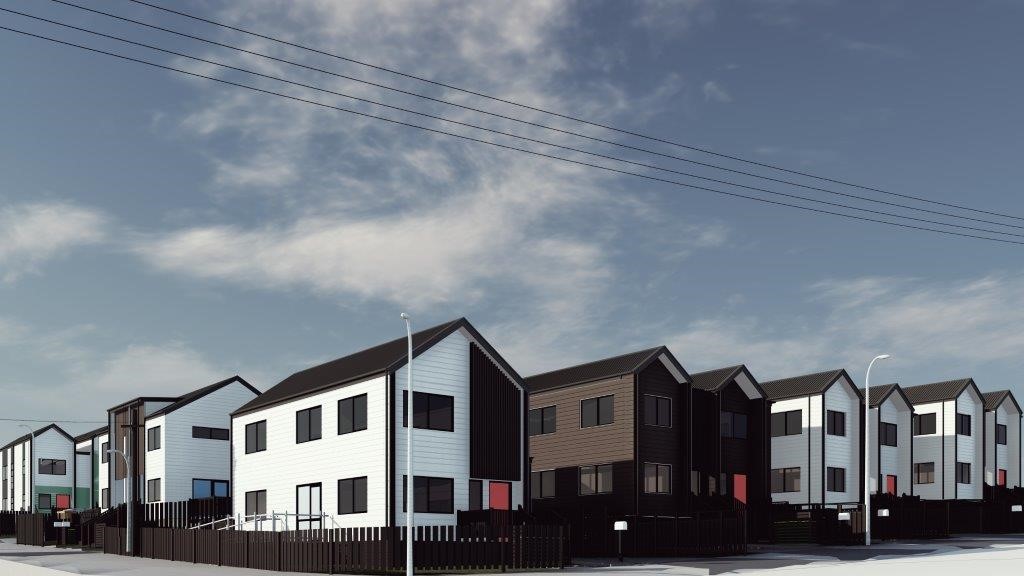 Although there was a jump in the number of new homes completed in Auckland in May, residential construction may be declining in the rest of New Zealand.

Auckland Council issued 1423 Code Compliance Certificates (CCCs) for new residential dwellings in May, up from 919 in April and 1296 in May last year.

That pushed the average back up to 1100 new homes homes a month, after it had shown some slight weakness over the previous couple of months.

The jump in dwelling completions in May brought an end to the slide in the rolling 12 months average , which had declined in each of the preceding four months to hit a 13 month low of 13,059 in April.

However it's too early to say if the latest figures represent a reversal or flattening off of the downward trend in new home completions in Auckland that's been evident since the beginning of this year, or just a temporary blip.

Some new data recently released by Statistics NZ suggests the number of new homes being completed nationwide could have peaked in the June quarter of last year and has since been in decline.

Statistics NZ is attempting to collect Code Compliance Certificates data from all councils around the country to provide a more comprehensive picture of new housing supply.

So far is is receiving that information from the Auckland, Hamilton, Tauranga, Ruapehu, Stratford, South Taranaki, Horowhenua, Carterton, South Wairarapa, Wellington City, Nelson, Kaikoura, Christchurch, Waimate, Waitaki, Invercargill and Gore councils, which Statistics NZ estimates between them account for around 61% of new dwellings completed throughout NZ.

On that basis, Statistics NZ estimates that the number of new dwellings completed throughout the entire country peaked at 9786 in the second quarter of last year and has declined every quarter since to 7889 in the March quarter of this year.

If those figures are an accurate estimation of the number of new homes being completed each quarter then the residential construction industry may not be in the boom mode that other measures, such as building consents, suggest, and may have already have been in decline for about the last 12 months.

However the Statistics NZ figures are still experimental, and it warns they could be revised over time.

But if Statistics NZ does continue to increase the number of councils it receives Code Compliance Certificate data from, the new figures could provide a more reliable and timely indication of housing supply and residential construction activity than is currently provided by various surveys and building consent data.

The chart below shows the monthly trend in estimated housing completions by dwelling type. 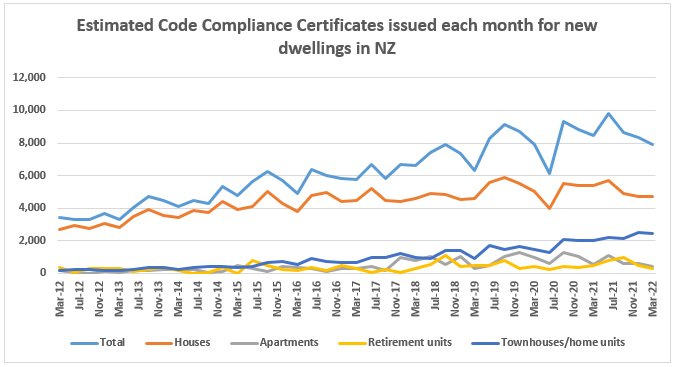 It makes sense to try and complete a building project before the winter starts?

Yep, building a house in NZ in winter isn't something anyone should do voluntarily.

Plus the article excludes the reality that completion rates fell of a cliff late last year, given the shortage of gib. That said, you'd expect residential to die a death at the moment because in a flat market the numbers don't add up.

It's almost like these builders take the average build completion time, and subtract that from late Summer or early Autumn.

Much better article than usual, looking behind the obvious headline figures.

maybe Interest.co.nz could talk to people within the industry a bit more?

you place a bit too much store in statistics at times.

and when you looks at stats look deeper at past trends rather than the data at face value. Historically There’s a very clear trend of house building slowing a lot when interest rates rise significantly.

Its always a good reminder of how numbers without much in the way of context or substance may not tell us much/everything.

Then again, there'd probably be 1/3 less articles and comments if even the realities of seasonality got removed. "Caravan sales plummet in June" sounds less fire and brimstone if you know why that is.

I am expecting a bit more intelligence and nuance in articles rather than reporting data at ‘face value’.

Interesting this opposes record consents being issue at the start. Have observed building sites in progress everywhere in Awk, Wanaka, Taupo, Bop and Chch. Could this be the material shortage and trades delaying completion?

Could the difference in rising consent's to diminishing CCC's be due to supply constraints? My theory is building companies, especially standalone builders signed up to much work recently and now they are waiting on materials to complete the projects.

The reason I say standalone builders is because in my view resources would flow to larger projects i.e multi-unit, apartments. These usually have larger firms, with stronger supplier relationships, undertaking the construction and the financial cost of delays are much larger.

This maybe why multi-unit is strong compared to standalone.

For winter time the averages are well up, please compare apples with apples in fact it’s higher than most periods on the chart which goes back to 2012.

Being a renter and an employee gives you mobility. Anecdotally those with mobility are departing in increasing numbers for the perception of a better life and a chance to get ahead financially. At the same time we are completing thousands of new dwellings per month. Many of which seem to be languishing on the market awaiting buyers.

Are we going to trawl the earth for potential new workers and tenants? Or will there be a rationalisation in the business sector to free up some human capital for the businesses that can survive. For example. Maybe your town centre could just  have 2-3 busy cafes instead of 4-5 moderately busy ones.

Arent recessions supposed to be capitalisms way of removing the weak (cafes and businesses that arent competitive) and empowering the strong.

This recession is overdue by several years and a lot of businesses have been hanging on to the surplus of discretionary spend (credit and asset bubble based) so unfortunately as that gradually gets pulled back there will probably be a lot more weak businesses exposed (than usual) that wont make it.

The smart ones are lockinh down costs, refining their customer bases and building war chests now. Recession preparation is the new game.

This would hold some water if we didn't the huge debt loadings we do now, mostly because the basics of living and so on have blown out over the last decade.

When you have huge amounts of debt that won't just disappear knocking around, the margin for error when it comes to a small walk-back in discretionary spend and a total collapse becomes very thin.

What constitutes a house these days ? Take a look at Millwater it's line after line of 2 bed townhouses that are all joined together like something out of corronation street. The whole housing mix is changing.

Peaked? What happened to "build back better"?