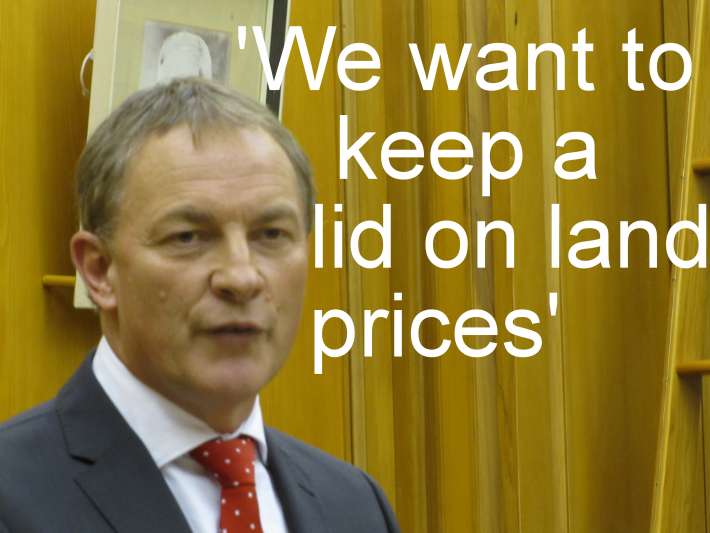 Labour's pledge to buy land sufficient for 1,500 sections to on-sell to red-zone home owners is a bid to keep a lid on rising land prices in parts of the city able to be rebuilt on, leader Phil Goff says.

Speaking on TVNZ's Breakfast programme this morning, Goff said he had heard some section prices had risen NZ$30-40,000 per section over the last few months, which would hit red-zone homeowners looking for new homes in the pocket if the price they had to pay for a new property was higher than the government's 2007 CV payout offer.

In the party's earthquake policy released yesterday, Labour said it would buy land for 1,500 properties initially, develop sections, and on-sell to red-zone home owners in an effort to avoid developers' fees.

“We’ll sell at cost – there won’t be a cost to the taxpayer – but we can help keep the lid on property prices,” Goff said on Breakfast Tuesday morning.

Labour could use powers under the CERA legislation to acquire land from current owners, although Goff said his preference would be to have a “willing seller, willing buyer”.

“In an extraordinary situation we wouldn’t rule out that,” he said.

“But look, there’s land coming in from South Canterbury Finance that will end up probably in the hands of the Crown, there’s other Crown land already being held there," Goff said.

"We just want to do what’s sensible and pragmatic to make sure we don’t get a blow-out in property prices – people who have lost equity in their homes anyway, in the red zone, because their homes have been destroyed, then having to pay astronomical prices, they’d get hit both ways. That simply isn’t fair," he said.

So you want to sell land at "cost" -whatever that is?  Why the hell didnt you do so when you were in power? Might have helped stop the rapid escalation of section prices over the last 10 years!

So Labour is prosposing to become property/land developer, insurance provider and banker (Kiwi Bank).  How do they proposed to fund these ventures - borrow more or printing more money?

I think the smart thingwould be to ease the process and compliance costs for more land development.  Labour is getting sillier heading towards November!

Not quite the same; National is paying all effected properties owner and they will in turn  claim the insurance.  AMI, the govt is only backing on the reserve fund.  OK Kiwi bank is a hangover from Jim!

Here, Labour is proposing in buying and seling directly..

I am concerning that Labour is grabbing the headlines and not providing enough in details or thought thru' the process properly.

Oh no.....tax-payers are going to subsidise property owners and insurance companies again? What a goofy !!

With all due respect, do you seriously consider your 'idyllic' prices will ever be achieved?     You keep banging on about Houston but the here and now is Christchurch and there are too many people with vested interests (local councils, existing property owners, builders, banks and developers for a start) who have nothing to gain (and in fact a lot to lose) should such a dramatic drop in land prices and construction costs eventuate. Smaller sections and more realistic dwelling sizes would surely be a better place to start in the quest for more affordable housing??

Government involvement can just as easily end up with government acting as the abuser of monopoly power to gouge prices.

Funny how land prices got so high and we had 3 quare meters on How to Make Money in Realestate  at the local book shop and the large transfer of wealth to show for it.

We may have expected to hear a hissing sound as air escaped but it hasn't. Perhaps land is seen as scarce and usefull (like gold)? and it is taken as a solid fact that Auckland will get another 1 million people in the future. these will (presumably be land purchasers).

While Mr Robertson company Infinity dodged a bullet – it had no exposure to mezzanine finance and the finance companies which collapsed taking so many in the industry down – it hasn't been all plain sailing for the South Island developer.

"The banking crisis in 2007 led to his banks calling, asking for money.

"That process went on and on and on – every three months another bank was asking for money back."

Now the problem is the more normal property industry laments – resource management regulation, councils and central government costs crippling the business of developing land, he claims. Prescriptive regulations are wiping more off his bottom line than the financial crisis, he grumbles.

He says developers are being made, by the regulations, to build developments with all the bells and whistles for a market that simply can't afford it."

So the tax payer should subsidise developers in a situation where growth is not at a natural level but due to high immigration?

and as for the land price, if mul's are the cause then if we were to drop them the whole property market should go fssssss!!????

He doesn't agree with Mr Robertson that regulation is a huge issue. While parts of the resource consent process are onerous, the most beautiful cities in the world – like Paris and London – are also the most regulated, he says.
http://www.stuff.co.nz/business/industries/4497042/Property-developers-standing-their-ground

The Worlds not over populated.

We are all watch over by machines of loving grace.

Hugh Pavletich still banging on about his theories, give it a rest mate

What about the Government buying land, making it available to lease to Christchurch earthquake victims at say 1%pa of the market value, such lease to last 100 years with no right to increase the rent over that period and every purchaser of the house over that period having the first right of refusal to buy .

Realestate is one of the few markets in NZ (that joe public participates in) that is truely influencesd by demand/supply.

All Goff's goofy plan will do is withdraw 1500 section from supply and hance push up pricing for other sections in the region. And those higher prices will be forced upon those that will be using their own hard-earned money to purchase sections.

FYI from The Press in an editorial:

In formulating and releasing a policy on how to deal with the consequences of the earthquakes, the Labour Party has performed a useful service.

It has put forward ideas for discussion around some of the issues – principally those concerning residents in the residential red zone – that are uppermost in many people's minds, and has obliged the Government to come up with answers to its suggestions.

A centrepiece of Labour's plan is the proposal to spend $230 million on "affordable" sections that would be sold "at cost" to 1500 red-zone homeowners. This would, Labour says, control cost inflation among private developers. Quite how the government buying sections, instead of private interests, would control any inflation in the market is not explained. Also, "at cost" suggests that Labour would subsidise the price of the sections, which means a few fortunate buyers would get sections they could not otherwise afford at the expense of taxpayers.

The most notable flaw in this proposal, however, is that it does not explain how the lucky 1500 would be chosen out of 6000 or so who can no longer remain on their land. Whether they were chosen according to some stated criteria, by a lottery or selected by some other method, a host of inequities would be bound to arise.

I agree.  But the problem as I see it is that Labour are attempting to solve a problem created by National's bad decision to colour code the whole of Christchurch and purchase swags of land and buildings in the red "no go in future" residential zone.  This all started when someone dreamed up the concept of "land remediation" and then (apparently) investigated it on some psuedo scientific basis - drawing (I assume) a whole bunch of scenario modelled conclusions which determined this land would always be subject to liquifaction if a similar event happened in future.  Well, yes, but... has that ever stopped us in the past - or does it even stop us presently in other areas of NZ?

Would it not have been better to consider construction design that would accomodate rebuilding in these areas in a manner that would limit the extent of destruction in future - as let's face it ... millions of NZers are living on land that will suffer similar serious damage to buildings perched upon it and underground services below it... but we're not  racing around placing "no future build/rebuild" constraints on that land.

We live on two small islands prone to earthquakes - so why not adapt as opposed to abandon?

Yeap it's all very well saying lets open up land quickly...last 11 aftershocks in last two days all been out Lincoln/Prebbleton/halswell..an area ear marked for about 3000 sections...is it that wise to /start building on areas you know are now active with fault lines (there is a report on this fault line in The press today)...really..and you wonder why reinsurers wont come back to the market when decisions to build in active fault line  areas are being made.