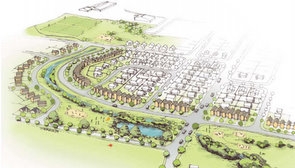 As the opposition Labour Party pledges to buy land sufficient for 1,500 red-zone home owners in Christchurch should it win November's election, the government is allowing the sale of 64 hectares of land available for residential development on the outskirts of Christchurch that it effectively controls through the South Canterbury Finance (SCF) receivership.

SCF receivers Kerryn Downey and William Black confirmed to interest.co.nz via a spokeswoman that Belfast Park was now on the block.

"The SCF receivers have commenced a sale process for the residential and industrial Belfast land. We are working with our sale advisors on realisation options,” Downey and Black said.

The land in East Belfast is controlled by SCF through subsidiaries Belfast Park Ltd and Tyrone Estates Ltd. Last summer, before the devastating February 22 earthquake, the Christchurch City Council rezoned the land from "Rural 3" to "Living G" which allows for mixed density residential development along with small areas of commercial and industrial land.

A spokesman for Finance Minister Bill English said the Government is keen to see affordable sections coming onto the market in Christchurch.

"However, it doesn't treat the SCF receiver any different to others in the market," the spokesman said.

In March Downey told interest.co.nz that interest in the land, from a number of property developers and the government, had increased since the February earthquake.

"That zoning approval and so forth has really added quite significant value and that was obviously prior to the earthquake," Downey said then. "And (after) the earthquake, as unfortunate an incident as it is, the land would appear to be of greater interest."

Asked whether he could come under pressure from government interest in the land given as SCF receiver he is acting on behalf of the taxpayer which is facing a massive bill following the earthquakes, Downey said his job was to get the best price for the land no matter who it was from. Under the Receiverships Act McGrathNicol is tasked with getting the highest value obtainable for SCF's assets, he said.

"Whether there be an offer through a government agency, through an SOE or (from) private enterprise, it doesn't matter as long as I get best value. As long as I follow a process that ensures I've got best value, I'm not selective as to who I sell (to) or what deal I make at the end of the day."

On Monday Labour Party leader Phil Goff said if Labour wins the election it would buy land sufficient for 1,500 sections to on-sell to red-zone home owners in a bid to keep a lid on rising land prices in the undamaged, or less damaged, parts of Christchurch. And yesterday Goff said he had heard some section prices had risen by NZ$30,000 to NZ$40,000 over the last few months, which would hit red-zone homeowners in the pocket if they're looking for new homes and the price they had to pay for a new property was higher than the government's 2007 CV payout offer for their damaged house.

McGrathNicol was appointed SCF receiver on August 31 last year when it failed to secure up to NZ$300 million of much needed fresh equity in time for the expiry of a waiver to a breach of the company’s trust deed. The receivership triggered a NZ$1.6 billion payout to 35,000 SCF investors under the Crown retail deposit guarantee scheme and a NZ$175 million Crown loan to McGrathNicol so it could repay SCF's prior charge holders including the George Kerr chaired Pyne Gould Corporation subsidiary Torchlight.

The government says the taxpayer faces a NZ$1.2 billion loss from the Crown retail deposit guarantee scheme, with the bulk attributable to SCF.

Belfast Park is just the latest of SCF's assets the receiver is selling.

McGrathNicol has sold the 100% SCF owned Helicopters NZ to Canadian Helicopters for NZ$154 million, it sold about NZ$100 million worth of commercial loans from SCF subsidiary and specialist plant and equipment lender Face Finance to GE Capital, it sold SCF's 79.7% stake in horticultural and primary sector processor Scales Corporation to private equity group Direct Capital for NZ$44 million, and about NZ$123 million worth of SCF's "Good Bank" loans to Japan's Nomura.

Downey and Black are also trying to sell SCF's 33.6% stake in Fonterra's biggest supplier Dairy Holdings. However, they've been forced to defend a High Court claim from fellow Dairy Holdings shareholder and Fonterra director Colin Armer who alleges the receivers and other shareholders' attempts to sell their combined 83.3% breach a shareholders' agreement.

Interest.co.nz understands discovery is underway in the case.

Has  the National Government lost the plot ? Its this type of utter incompetence that will force me to not vote at all

What a cock -up

It's becomming clear just how easy it is to take away peoples' rights.  Have you seen the new Food Bill being introduced in this country?  Have a look at http://nzfoodsecurity.org for some of the issues with it.  Essentially it turns a human right of growing food into a government authorised privilege.  The implications are shocking, but there has been practically zilch in the way of media coverage...

Are there really many willing developers to take this on anyway?

The site was not free of liquefaction nor is it non-liquefiable soils, so will buyers rush there anyway?

Sections are not selling and in no real demand with the mass exodus from Christchurch over the last 12 months.

I have 3 sections actively on the market (with 2 high profile agencies) at prices at least 20% lower than 2007 levels.  I've had no interest, certainly no offers.  (Priced in the mid late $100s in established areas).

There is only slow demand in new subdivisions too.  Just because a few subdivisions sold out their last lots doesn't mean there are lots of buyers out there.  Most people seem more keen to buy existing houses rather than endure the hassle of building.

The Government doesn't necessary need to create new sections.  Speeding up insurance issues would free up a lot of sections in the green zones that will become available as people decide houses are not economic to repair.

In terms of the Government doing anything, they should be working towards sorting out what to do with all the perfectly good houses they are going to end up buying in the red zones.  Working to shift these (near new) homes to a new subdivision would make sense, both creating affordable homes and not wasting resources.

Your last para Chris, couldn't agree more. As long as the subdivision is on good ground, a bit of Govt/CERA intervention could allow a lot of these houses to be saved, and upgraded at the same time (to current building code). Ours is a case in point, even though insurer has finally declared it a total loss.

Really, the CCC is brain dead. Aside from liquefaction risks on this East Belfast land, surrounding business activities endow this land with a very unpleasant odour. I wouldn't board our dog there!

Two factors that in my view may influence the market for sections: First, location with respect to travel distances and times, costs for work, schooling etc. Second, public perception of the quality or otherwise of the ground. For our family these were key to the choice we made.

One thing puzzles me, why some insurer doesn't re-enter the new cover market with a policy with no EQ top-up, i.e. only EQC cover for up to $100K + gst. With a strong foundation on good ground, I would feel confident to take this on, despite what happened to us by the River. I'd sooner do this than have no insurance at all!

Yeap agree, but some of the ' good land' is now got an active fault line underneath it (the GAP) they are calling it. So Lincoln, halswell, Prebbleton  area where they  where going to put in large sub divisons are going to find it very difficult to get insurance now it has been identified and keeps shaking away..

The scientists commenting on these small quakes in Prebbleton/Halswell area are pretty positive that the underlying (i.e. not coming to the surface) fault/faults are not a major concern, and the expenditure of ground stresses in smaller shocks is preferable to no shakes and the stresses accumulating. Doesn't make these areas unsafe to build if the soil is not prone to liquefaction, that was the point I was making (unless you have a surface faultline going under your building platform!). If you are determined to avoid active fault lines (icluding the ones not known about yet) you might have to leave the country. You can minimise these risks but can't avoid them completely.

Hi, @ Chris-J , I'm in the red zone so am interested to know where you sections are.  Can you please let me know the area we could be interested as our house is a rebuild, so we are looking for land to build on as soon as we are able to..  thanks

I heard today that Labour also wants to buy Pike River mine for many millions of dollars if it gets in power and only a few days ago I heard that it wanted to buy something else too ... umm ... with what??