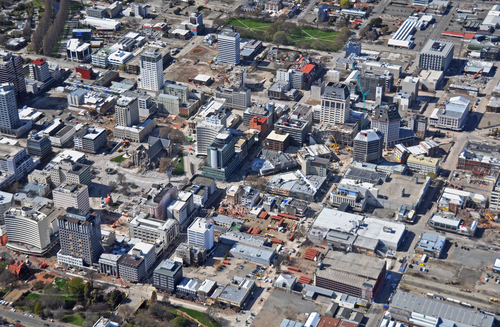 “This NZ$320 million settlement is the largest single insurance pay-out in New Zealand’s history. This is great news for thousands of Housing New Zealand’s tenants, for Canterbury’s economy and New Zealand taxpayers,” He said.

Smith said the final amount received for the 5559 damaged houses was less than the original claim because the submitted claim was based on a five-year repair timeframe, which has now been reduced to three years.

"This has reduced the escalation component of the claim and due to early settlement Housing NZ will also earn interest on settlement monies prior to paying for repairs. In addition, we have a better understanding of the extent of damage and the appropriate repair methodologies."

Smith said that the amount received would cover the repair programme.

"Housing NZ has a 10-year rejuvenation and rebuild investment plan of NZ$1.1 billion that will contribute to increasing and improving our housing stock. This involves ongoing negotiations with [the Canterbury Earthquake Recovery Authority] and the Christchurch City Council.“

Smith said the negotiations were complex and challenging.

"They took several months to complete and involved not only our lead New Zealand insurer Vero, but other New Zealand co-insurers, London insurers and Lloyd's of London and Insurance Broker Aon. I was concerned, given the huge sums involved, that this claim could have resulted in years of litigation. I congratulate all parties involved for working to achieve this pragmatic and fair settlement."

The settlement enabled Housing New Zealand to proceed with its repairs and redevelopment at pace.

"It can now get on and demolish, repair or redevelop its housing without the slow and bureaucratic process of having to individually check off each property with the insurer. This settlement enables the repair programme to be shortened from five to three years," Smith said.

“Housing New Zealand can now move forward and reconfigure its stock for the future social housing needs in Christchurch. The new housing will have a lot more one and two bedroom units and less three bedroom homes. We are also moving from concentrated state housing estates to mixed communities, as research shows we can get better social outcomes.

“This significant settlement gives us the opportunity to rebuild Christchurch’s social housing so it is safer, better aligned to the need and of better quality than prior to the earthquakes.”

The obvious question is that why can't private individuals cash settle with EQC?  And why can't we have the details of our claims so that we can actually make financial decisions?
Brownlee and Simpson seem intent on defrauding insured homeowners.

The simple answer to that Chris_J, is that you can't be trusted with your insurance payout, from the premiums you've paid, not to devolop a P habbit, and smoke/inject/poke it away. Silly citizens can't make decisions for themselves you know!

What's more a judge will go out of his way to make sure you don't find out, apparently:

"I think there may be good grounds for the injunction.

"But I am shocked that the court has failed to address basic aspects of the law," he said on his blog.

The most glaring omission was the court's failure to address the fact EQC had to show, "it is in the public interest to enforce secrecy".

"Nor did the judge apply the Bill of Rights, despite the fact that he cannot by law grant an injunction that affects free speech rights unless he finds that to do so is demonstrably justified in a free and democratic society.

"I would have thought there was a fair case to be made that the free speech interests here are strong ones: the blogger has alleged the email reveals incompetent and biased claims assessment.

". . . in the absence of a proper analysis of the legal principles, he (the judge) provides no reason for us to be confident that he's got it right." Read article

It's not enough for the government to actively privatise the profits and socilaise the loses at the nation's expense, the judiciary now seems content to bend the law against the best interests of the taxpayer.

Wonder what happened to the doctrine of utmost good faith

definition
Uberrima fides (sometimes seen in its genitive form uberrimae fidei) is a Latin phrase meaning "utmost good faith" (literally, "most abundant faith"). It is the name of a legal doctrine which governs insurance contracts. This means that all parties to an insurance contract must deal in good faith. http://en.wikipedia.org/wiki/Uberrima_fides

This is the absolute opposite to what Andrew Hooker was explaining. Cynical view. Does that mean the insurer said it will take 5 years to fix your claims (of $450 million) but if you take it as a cash payout now (rather than actual repairs) you can have $320 million? Someone is taking a double hair-cut.