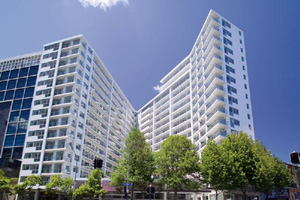 Love them or loathe them, there's still money to made by investing in Auckland's shoebox apartments.

And judging by the turnout at a couple of auctions this week there's still plenty of people prepared to put their money into them.

The first auction was held at City Sales Karangahape Road rooms where four properties went under the hammer.

On offer was two bedroom apartment in The Volt building on the corner of Mayoral Drive and Queen St, a handy location for students because of its proximity to the university and various other educational facilities in the immediate vicinity and on the very doorstep of the CBD and all its attractions.

With a floor area of just 36sq m plus a compact balcony this was definitely shoebox material, but these are popular with students and young people working in the city and it was rented out at $395 a week until next January.

Several bidders were chasing the property and it sold for $237,500, providing a gross rental yield of 8.7%.

Deducting rates of $905 a year and body corporate levies of $3490 would bring the yield back to 6.8%, which is still well above what you can get from the banks at the moment, although you'd need to allow for some vacancy and maintenance costs as well.

Quotable Value records show that the same apartment was last sold in August 2012 for $215,000, which would have given the previous owner a capital gain of $22,500 (10.5%) in less than two years, although selling costs would have eaten in to that.

Other properties offered by City Sales at the same auction were:

A 60sq m one bedroom unit with a car park, sold with a management agreement in place to the Amora Hotel, producing rental income of $16,364 plus gst a year, with the hotel paying body corporate levies and rates. It sold for $257,000 plus gst, giving a rental yield of 6.4%.

A 38sq m, two bedroom, furnished apartment offered with vacant possession. Although there were two bidders chasing this property it was passed in to be sold by negotiation with a highest bid of $180,000.

The property required building remediation work and although it was advertised as "seriously for sale" it received no bids and was passed in.

There was also a good crowd at the Ray White City Apartments auction held at their Lorne St rooms in the CBD the next day.

This produced the following results:

Managed as part of the Quadrant Hotel's pool of rooms,this 32sq m unit provided current income of $16,720 and was passed in for sale by negotiation with a highest bid of $212,500.

Each of these one bedroom units in the same block had a floor area of 42sq m plus a 16sq m balcony. Rent on each was appraised at $360 a week, and each had rates of $1120 a year and body corporate levies of just over $1400 a year.

They were at first offered for sale separately and then together as a package, but none of the offerings received any bids.

You make numerous reference to good yields from apartments.  As you will be aware there were significant amendments to the Unit Titles Act a few years ago.  One amendment is that now all units must prepare a "long term maintenance plan" via their body corporate.  Obviously this may create substantial body corp fee increases as owners are now forced to prepare for future maintenance expenses.  Greg, how do you think this will effect future apartment yields?

In addition to above, s.122 of the Building Act 2004 refers to earthquake prone buildings.  Residential buildings which are 2 or more storeys and contain 3 or more household units, are subject to earthquake strengthening standards similar to commercial buildings.  Greg, do you think that structural upgrading of apartment buildings will effect future yields for property investors?

I have stakes in three CBD buildings and the largest body corp increase I've experienced from the adoption of a long term maintenance plan is 10% or $450.  Quite happy to pay it as it's going to cover expenses that would be incurred anyway.

I would not buy a building that needs earthquake strengthening for the same reason I wouldn't buy a leaky building.  There are plenty of well-built and well managed buildings out there, Precinct on Lorne, Quay West and Beaumont to name a few.

I agree, a 10% increase doesn't sound too bad - especially considering the rising costs in general.

With respect to earthquake prone buildings - i think the issue is many buyers aren't as informed as you.  They probably would'nt realise this is a potential risk where they might get stung down the track.

Agents are required by law to declare any problems with the building like leaking, I'm not sure if that obligation extends to potential earthquake strengthening.

It's as simple as getting your lawyer to put a paragraph into the s and p agreement.
'separately warrent' that the building mets the minimum eathquake standards.  If it turns out it doesn't (and this was evident at the time contract signed) then could sue vendor.
Prob is if building has not been assessed, but will be assessed in near future, then you will bear all the risk.
Almost all buildings in wellington pre 1970s have been assessed, so makes things a lot more clear cut buying an apartment down there.

There may be a few problems with that condition as the exact earthquake requirements are still being reviewed.

At present, whether a building meets the minimum requirement is asecrtained via an IEP (initial evaluation procedure) where structural strength is gauged as a percentage of NBS (new building standard).

For now - 33% is the magic number.  If an IEP comes back under that then it's demolish or strengthen within 15 years.  However, here's the twist, the banks would like to see an IEP of 67%.

The anecdotal evidence I have suggests maintenace is probably the major expense that lanldords tend to skimp on, whether they they own stand alone houses or apartments. But short term savings from deferring maintenance can lead to long term pain, regardless of the type of property.
Sesmic issues are already a major problem for several heritage apartment buildings in Auckland but there are only a handful of these. Most of the apartment blocks in the CBD are relatively new and should not be affected, although there may be exceptions. It could become an issue for some of the low to mid-rise blocks of home units that were built in the suburbs in the 1960s though.

Landlords do not skimp on maintenance....yes just look at the beautifull rental properties that dot this great nation. Bless the Lords of the Land.

Thank you, we do our best.

Yea thanks frazz. I have always said Landlords do a great job for everyone.
Healthy profits indicate the market supports what they do too.

I’ve got apartments in the CBD and I always lean towards a mix of capital gains potential and rental yield. I wouldn’t go the low or the high end of the market but aim for the sweet spot in the middle where the rent covers all costs and the apartment is in a good building with strong demand and increasing prices. No point earning $5,000 - $10,000 a year on a positively geared rental when you can earn three times that in capital gain (assuming 10% per year on a 300K apartment).

Horror houses, 90% of NZ rentals fail the proposed WOF
The proposed housing warrant of fitness is a result of calls for rental properties to have standardised criteria they are required to meet. You might want to read this article Kimy?

I think we flogged this to death, basically a lot of it was farcical,
"Some changes were as minor as inserting batteries in smoke alarms........"
Batteries I'd class as being replaced by the renter as its a consumable.
Other things like insulation, well older buildings were not required by the building code to have insulation, hence requiring insulation for a WOF is plain retarded.  All you need to ask does it meet the code when it was built? and OK comment, "no insulation".
"31 per cent of houses lacked code-compliant handrails and balustrades"
I mean if you went to get a  WOF with a 1995 (say) car and were told it failed as it had to meet the 2014 crash requirements?
If you are buying a car however you have the choice of getting a 2014 car or a 1995 car, big cost difference of course.
If you have small children and the property is 20+ years old non-complying balistrades are an issue, simple use your eyes and dont rent that property.  What about if the house is historic and you are not allowed to do changes?
".....and good heating are still lacking in many rental properties"
The criteria was fixed units rather than portable I believe. Yet there is no significant difference in efficiency.   So with one the landlord provides it, for the other the renter, either way they are cheap and last decades.

90% of NZ homes, rental or owner occupied, would fail the proposed rental housing WOF.  My house would fail and I've never met anyone who considers my house a "horror house".

But I suspect you're only interested in pushing your tall poppy agenda so I'll leave you to it.