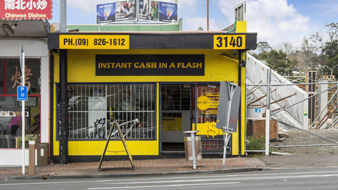 It seems investors can't get enough of small retail units and that was the case at Bayleys latest auction of Auckland commercial units, when a small shop in the west Auckland suburb of New Lynn was sold at a net yield of just 3.6%, while a block of three shops at Three Lamps in Ponsonby will be returning their new owner a yield of 5.3%.

At the other other end of the scale a canny couple got themselves a steal when they picked up an industrial unit at Silverdale that will be providing them with a net yield of almost 10%.

Several vacant commercial properties also sold under the hammer at the same auction and there was strong competition for a Howick motel offered as a freehold going concern.

Overall there were 17 properties offered for sale by auction on the day, with most of them being of a size that would put them within reach of private investors and family trusts. Seven were sold under the hammer, one was sold conditionally and nine were passed in for sale by negotiation.

The full results are below:

293-297 Ponsonby Rd. There was strong competition from several keen bidders for this block of three shops in Ponsonby's main shopping strip at Three Lamps, which were providing net income of $150,253 a year. According to the auctioneer the shops had been in the same family's ownership for more than 100 years. They sold under the hammer for $2.82 million, providing the new owners a net yield of 5.3%.

3140 Great North Rd, New Lynn.  An 80sq m shop on a 150sq m site with rear parking, providing net rental income of $14,000 a year. The location next to a new Bunnings outlet currently under construction could have appealed to developers. It sold under the hammer for $393,000 providing a net yield of 3.6%.

49 Carr Rd, Mt Roskill. An 809sq m corner site with a 734sq m light industrial premises was offered with vacant possession from 1 February next year. Sold under the hammer for $1.21 million.

682 Pakuranga Rd, Howick. A 10 unit motel with pool and four bedroom manager's home and office, on a 1677sq m site offered as a freehold going concern. Sold for $2.35 million.

1652-1654 State Highway 1, Wellsford. A 3884sq m site on two titles with 1187sq m of mixed use space providing net rental income of $101,000 a year. The auctioneer started proceedings for this unit with a vendor bid of $900,000 and when no further bids were received it was passed in for sale by negotiation.

Unit 7, 49 Sainsbury Rd, St Lukes. A modern commercial unit with 407sqm of office space, 247sq m of warehouse space and 14 car parks. It was providing net rental income of $140,000 indexed to CPI annually. There were multiple bidders for this property and in an unusual move for an auction it was sold conditionally, with the highest bid of $1.888m accepted subject to the approval of the vendor's board. That price would provide a net yield of 7.4%.

639E Whangaparaoa Rd, Stanmore Bay. A 115sq m retail unit leased to a Subway outlet providing net rental income of $35,055. The only bid on this property ($480,000) was made by the auctioneer on behalf of the vendor and it was passed in for sale by negotiation.

12 Cape Hill Rd, Pukekohe. The Cape Hill Industrial Park, a 3.29ha site with 7276sq m of floor space and six tenants returning $480,000 a year. There were no bids on the property and it was passed in for sale by negotiation.

8/50 Stonedon Drive, East Tamaki. A two level live/work unit with 103sq m warehouse downstairs and a 98sq m, two bedroom apartment upstairs in the newly completed Stonedon Terraces complex. Producing net rental income of $41,600. The highest bid for this property was $500,000 but it was passed in for sale by negotiation.

289 Onehunga Mall.  A 528sq m retail premises with 18 secure car parks on the ground floor of the Atrium in Main apartment complex. Vacant. Passed in with no bids.

281A Onehunga Mall. A 128sq m ground level unit in the Atrium on Main complex, with six secure car parks. Vacant. Passed in with no bids.

Unit C, 33-35 Waipareira Ave, Henderson. A modern industrial unit with 200sq m of office/warehouse space. Vacant. The auctioneer opened the bidding with a $500,000 bid on behalf of the vendor but when there were no further bids it was passed in.

33-35 O'Shannessy St, Papakura. A modern, two level mixed use complex with two retail/office premises on the ground floor and four 2-bedroom apartments on the upper level. The commercial premises provided net rental income of $28,000 and the apartments were rented for $66,560 a year. Passed in with a highest bid of $800,000.