A house in the Auckland suburb of Sandringham sets a record price of $1.71 million

A house in the Auckland suburb of Sandringham sets a record price of $1.71 million 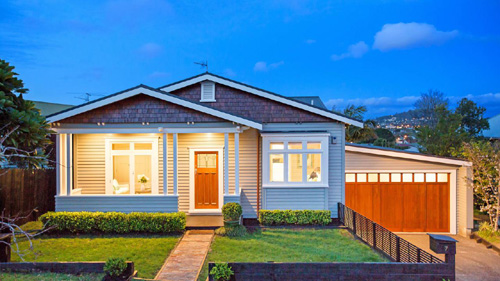 This house in Sandringham sold for $1.71 million.

A renovated bungalow in the Auckland suburb of Sandringham appears to have set a record price for the area, selling at auction last week for $1.71 million.

The house was located at 7 Taumata Rd, which runs off Sandringham Rd just before its intersection with Mt Albert Rd.

Property records show it was built in 1921, had four bedrooms, two bathrooms, a double garage and had been refurbished to a high standard.

It was on a 652 square metre section and unlike some other properties in the vicinity which have sold for unusually high prices, the section does not appear capable of subdivision under current zoning, so it was unlikely to have been purchased for its development potential.

According to QV.co.nz, sales around the million dollar mark are not uncommon in the area but only one sale is recorded this year for more than $1.1 million, a house around the corner at 107 Fowlds Ave which sold in September for $1.41 million.

Sandringham has a mix of older properties, mainly 1920s era bungalows, and newer blocks of flats and town houses.

The character of the area has changed markedly in recent years and it has become particularly popular with Indian migrants who have transformed the formerly rag tag Sandringham shopping strip into hub for Indian restaurants and shops.

The agent who handled the sale, Damon Elia of Bayleys Mt Eden, said a major selling point of the house was its elevated position near the Mt Albert Rd ridge, which gave it north facing views towards the Sky Tower and the CBD (see photo below).

He said the vendors were surprised at the price they achieved, but other property owners in the area were were hoping the high price would not be a one off. 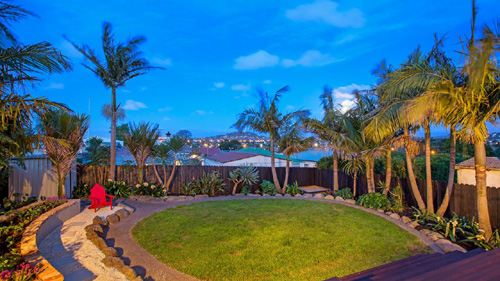 The view (above) from the deck at the rear of the property, with Mt Eden in the distance. 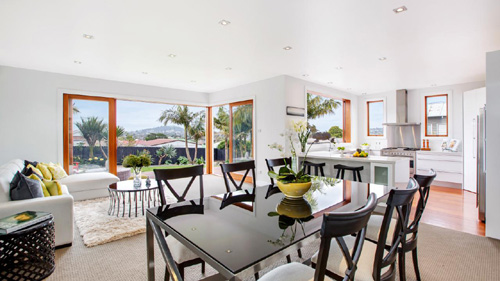 The interior of the house that sold for $1.71 million.

Oh come on, now this getting beyond ridiculous. Off your behind National and start putting things in place to stop this stupidity

How much the vendor spended to brought an old house to this moden level? I guess 400k.

Personally I would say that someone has more money than sense. Or an inflated sense of their own perspective, a casino is not an attractive look.
Though I do hear that the Chinese laundary is working quite nicely ...there, which may account for the high price.
And this may account for the worldwide growth in current accounting practices stupidity.
I believe it is widespread and getting more prevalent as I read more things into the real World economy, fiddling the books..
http://www.msn.com/en-nz/health/medical/virus-that-makes-humans-more-stu...

250 meters from the biggest concentration of Housing Corp in the central suburbs.

I was thinking the blocks bounded by Mt Albert Rd, Owairaka Ave, Stoddard Road through to May Road. There's hundreds of HNZC properties in a small area.

Interesting market Auckland, our old home GV is now 21% lower then the previous one, and that is central Auckland location, double grammars zone. I thought the sold price would be the yard stick for the new GV

This time no go - wonder why

Highly doubtful the expensive and tasteful interior remodelling of the property was done by a previous long time owner, suggesting it was recently acquired as a doer-upper, done up, and flicked on - the rows of palms on the boundaries is a surprise - lot of money has gone into this - inside and outside

It's coming - It's almost here - this is the start

DEFINITION of '"Blow-off"'
In technical analysis, a term that refers to a sharp price increase that comes after a long period of price appreciation, and is followed by a fall in the price. A blow-off is seen as a rally's last breath and is a highly bearish sign

INVESTOPEDIA EXPLAINS '"Blow-off"'
A large and dramatic price movement is generally seen at the peak of a market. The idea behind the bearishness of a blow-off is that it signals the activity of the most irrational and overly exuberant market participants, who, wanting to take part in the rally, momentarily push up the already-overvalued asset

Too much debt – the environment we find much of the world in today – is inherently deflationary, as debt service takes away from current consumption. Debt is future consumption denied, and at the end of a debt supercycle future consumption and thus total GDP are going to be constrained until the debt is dealt with in some manner. Too much debt has often led to some kind of deflationary period. For all intents and purposes, much of peripheral Europe went through a deflationary recession/depression following the last debt crisis. And their debt has not really been dealt with: it is still hanging around to create a problem in the not far-distant future.

That's steep, even Sydney doesn't cost that much.  I had a look at a waterfront apartment in Brisbane, 144sqm and it was late 600K..

its in a very exclusive area?
any idea what the land cost is in that?
regards

Hardly a "very exclusive" area
A 97 apartment single building is also hardly exclusive
Developer is simply capitalsing on and selling double grammar zoning feature to non-discerning chinese buyers. This will begin the devaluation of Mt Eden.

Frankly I think the entire global economy has lacked any sense or logic for a decade....and human behaviour is the driver.  The "blowoff" has indeed been like a madness, ppl desperate to make money gambling like crazy.  Mostly of course its been with others money.
regards

A shortage of asset liquidity is a major issue in melt up situations - even happened in the USD12 trillion US Treasury market not 3 weeks back, much to the belated consternation of the regulatory authorities. Read more

Every man for himself

Economic policies are diverging in the developed world as deflation looms

Followed by, beggar thy neighbour. Sounds like the last Great Depression....more and more.
I wonder what rabbit they will pullout of the hat this time to stop it....
regards

The Chinese are hosting APEC which is costing them billions...mostly spent on fireworks and kickbacks.
Expect more of the same from our illustrious 'dear leaders'...who collectively hold the magic wand.
We must all not lose face in this game of charades.
That is why we import some of those kickbacks to bolster Auckland prices.
Shhhh.....do not tell anyone.
Follow my leader, follow the money. Do not pass go....do not expect Auckland to have the Monopoly.
Tis a worldwide phenomenom. House can only go up.
Just do not ask Detroit.

the game is un-ravelling and has been for some years. Ever since I read china had switching from making toys to making houses no one wanted I thought oh dear make believe consumption.

It might pick up pace soon
Operation Fox Hunt began in July 2014
Ji Xingping is exerting pressure on Tony Abbott to assist in locating and extraditing felons
Abbott and Xingping and John Key are all together at Apec
You can be sure that will be a hot topic of conversation among the 3 of them
One certain difference that can be counted on is, John Key wont disclose it as something important affecting New Zealand. He will downplay it