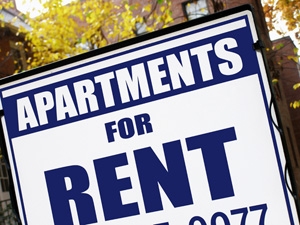 Rents were well up in December compared to a year earlier in most of the main centres while the number of properties being let was well down, according to bonds received by the Ministry of Business Innovation and Employment.

The biggest increase in rent occurred in Rodney in the north of Auckland, where the median rent for newly tenanted properties increased by $50 a week (12.7%), from $395 a week in December 2013 to $445 a week last month.

That was followed by Waitakere in Auckland's west where the median rent for new tenancies increased by $40 a week (10.3%) to $430.

In other main centres rents increases were generally lower (see table below), with the median rent in Wellington City rising up 3.8% compared with December 2013, while in Christchurch the median rent of $380 a week in December was unchanged from a year earlier, adding to growing evidence that the city's housing shortage could be stating to ease.

However while rents were generally headed up around most parts of the country, the number of new lettings in December was significantly down on a year earlier.

In all of the main centres except New Plymouth, the decline in the number of properties being newly tenanted in December fell by double digits when compared with December 2013.

In six centres the decline in new lettings was above 20% (see table below).

The biggest decline in new lettings was in Tauranga where they were down 37.1% compared with a year earlier.

The trend for rents to be rising while the number of properties being let is declining suggests the residential rental market is continuing to tighten and the imbalance between the supply and demand for housing is continuing to worsen.

Absolutely not surprised. I expect similar or greater increases over the next 12 months.

When you present a tidy, well kept home in a good area for rent in Auckland there is a line at the door to view it.

Not so.  I struggled to rent a place in Kohimarama, 3bdr, 550 p/w with sea views.  took weeks to rent out.  People just dont have the money.    Actually no they do have the money, the market is saturated with rentals.  Look at trademe Kohimarama, dozens of places to choose from.  But if you want to buy that's a different story..

Must be the location fat pat. I wouldn't want to live in Kohimarama either. In central fringe and good suburbs out west I've found it to be a very different story.

Sounds awful. And people wonder why Auckland property is expensive.

You are correct fat pat.

And anyone who suggests Kohimarama is not a great place to live is talking rubbish.  The Bays are beautiful.

Might be beautiful, but not where people want to live...

Ponsonby, Mt Eden, Grey Lynn is where people want to be.

BTW I could rent a 3bd in a low income suburb of Chch for $450pw 10 times over this week.  Houses that were only worth Low 200s pre quake, even ones that are deemed uneconomic to repair because of foundation damage...

That really is just your opinion Chris J and it certainly is not supported by the top property values.

Some of Aucklands most beautiful and expensive homes are in Mission Bay, Kohimarama and St Heliers.

Last time i checked didn't billionare Graeme Hart have a home in St Heliers, or what about Grant Baker, or maybe Lucy Lawless....

In terms of renting people would prefer to be in the inner and inner west central suburbs.  Simply a fact proven by the above alleged inability to rent a house in Kohi.

People are not keen on the commute from the eastern suburbs and the facilities are not as good unless you are close to Parnell/Newmarket ie in Remuera.

If I can get over 10 good applicants for a small ex govt house in chch east with unrepaired earthquake damage renting for not much less than a 3bd in Kohi, then clearly people don't want to rent in Kohi.

Perhaps.. but the eastern suburbs are extremely sought after, both to live, and as a target for investment.  My guess that there’s been such a vast number of properties in Kohi / Mission Bay / St Heliers purchased for investment (ie. safety deposit boxes for wealthy foreigners) that there’s now a glut of rentals on the market in those areas.  DINKS can now pick and choose while landlords now have to accept not only a 2-3% return, but second grade tenants, (smokers and pets).

...really should I be impressed?  Without Google, I'd still be wondering who Grant Baker is...

....and I could do without Lucy Lawless as a neighbour...she'd probably whinge about the 6L V10 engine...

.....my wife was a property manager in the bays for nearly 15 years so I think we have a fair idea of the rental market in the area.

It's a case of different strokes for different folks Chris.

If you want to party (as i did during my uni days) then Ponsonby was great.

If you want to raise a family then the bays suburbs are great.

If you want to retire then it's hard to beat Tamaki Dr or St Heliers for great views, casual lifestyle and the beach.

I think when you refer to where people want to live - you are perhaps referring to the younger generation.  Of course they want to be central - most of them have no car and thats where their friends are living, plus its close to their place of study.

However my argument is also valid and it is that property values are a reflection of where there is demand and there are some very expensive properties in the Bays.  However you are correct that rents in the Bays have not risen a lot over the last few years, although the media portrays otherwise.

Maybe they were aspirational in the 80's and 90's.

Now its all about Herne Bay, Ponsonby and Grey Lynn.

SK i lived at the top of Franklin Rd in Ponsony when i was 20 and studying - and i did have some fun.

Later in my mid thirties i purchased an apartment on Tamaki Drive.

I can honestly tell you i had A LOT MORE FUN LIVING ON TAMAKI DRIVE!!!

Their are an endless amount of fit woman consistently running and walking past your front window often wearing very little.  If you dont like that then mate,  i guess Tamaki Drive is not for you.

Herne Bay, Ponsonby and Grey Lynn - In those areas you can rent / buy a cold uninsulated shack, euphemistically called a villa.  Some so decrepit they still possess a “meat safe”.  Because there’s no beach access, you have to just buy stuff to pass the time, mostly from overpriced shops euphemistically named artisan bakeries.  I think I’ll stay in Kohi thanks.

Yes - and the fact that people are trampling over each other to buy those shacks is the salient point. Same reason people pile into shoreditch while the only action in belgravia is the tumbleweed blowing past.

Remuera has also long since lost its cachet.

I think The Bays, including Remuera are slowly going downhill in terms of property values.  It's now all about Herne Bay, Ponsonby, Grey Lynn, Westmere & Pt Chev.  I predict within the next 10 years The Bays will be one of the more affordable suburbs like the Onehunga and Ellerlie.  People are abandoning The Bays and chasing Central West properties for a reason - The Buzz.  Only those who are old fashion and retired will remain around Mission Bay.

Its only a matter of time before many  investors realsie that taking the Capital Gain is better than fighting  with tenants .

With your average rental costing $100-200 pw to own, it's no surprise people aren't buying to rent.  Of course principal payments will show up on your income statement and you will have to pay tax on that as well, leaving you with about 1-3% yield on your deposit.  Talk about capital gains all you like, even in a overpriced market, but cash is still king.  You can't beat an asset that puts cash in your pocket every year, something that takes money out of your pocket is a liability, too many of those and you will go broke.  Maybe the govt will increase benefits to renters, that would be great wouln't it!