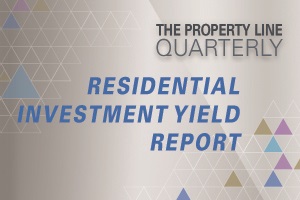 Residential property investors in most parts of the country are facing further falls in their rental yields, as property prices in most places continue to outpace rising rents, although Christchurch is a different story, according to the latest REINZ/interest.co.nz Rental Yield Indicator.

The Indicator provides the theoretical gross rental yield investors would achieve if they purchased a three bedroom house at the REINZ's lower quartile selling price in 56 areas around the country where there is a high level of rental activity, and then rented it out at the median rent for three bedroom houses in each of those areas.

The price and rent figures are for six month periods, so the yields are a rolling six month average, updated quarterly.

The chart below shows the yields that would be achieved in all 56 areas and how they have changed each quarter between September 2014 and December 2015.

In September 2014 the yields ranged from 11.8% in the Hastings suburb of Flaxmere to 4.3% at Highland Park in eastern Auckland.

In December 2015 the yields ranged from 11.5% in Flaxmere which is the only place monitored that has a yield in double digits, to 3.6% at Highland Park and also at Torbay on Auckland's North Shore.

The chart shows that yields have been continuing to fall in most parts of the country, but that the rate at which they have fallen had slowed towards the end of last year.

One of the biggest movements between September and December last year occurred in the Whangarei suburbs of Kamo/Tikipunga/Kensington, where the yield dropped from 7.1% in September to 5.6% in December.

That was caused by the lower quartile selling price of three bedroom houses in the area rising from $242,375 in six months to September to $270,000 in the six months to December, up 11.4%.

But over the same period the median rent charged for three bedroom houses in the area dropped from $330 a week to $290, a decline of 12.1%.

The rise in prices may be a result of increased investor activity in the area, as investors seek higher yields in areas outside Auckland..

But the increased supply of rental properties that creates could also be starting to push down rents.

In Auckland, Hamilton and Tauranga, rising lower quartile prices were the main influencer of falling yields, with rents also rising but generally only modestly by comparison with prices.

On the North Shore, both of the suburbs monitored by the Indicator had yields under 4%, and in Waitakere they hovered around 4% and may well slip under that benchmark in the March quarter.

Pukekohe/Tuakau posted a 5% yield and if that slips at all in the next quarter it will mean everywhere in Auckland will have yields below 5%.

Other main centres show similar trends with the yields in Wellington ranging from 5.2% in the Central Wellington suburbs of Vogeltown/Berhampore/Newton and in the Hutt Valley suburbs of Epuni/Avalon, while yields got up to 7.7% in Wainuiomata and 6.9% in Taita/Naenae.

The figures for Christchurch suggest there is increasing volatility in that market, which is likely being driven by the rising stock of housing coming on to the market.

Both the lower quartile selling prices and the rents dropped in all three of the areas monitored by the Yield Indicator between September and December.

Those figures should ring alarm bells with Christchurch investors who are carrying reasonable amounts of debt because they could find themselves squeezed between declining capital values and falling rental income, while those investors looking to add to their portfolios may prefer to sit on the sidelines for the time being to see where things end up.

The Christchurch Woolston/Opawa data is wrong. Rents have not dropped that much, so it's a data error probably small sample size and non-market rents. The median rent should be about $400 giving a yield of 6.4% which lines up with Hornby.

Thanks Denpal, The rent figures are collated by REINZ so I have asked them to check the Woolston/Opawa figures, but in the meantime I have altered it in the story and the table to the current median published by MBIE, which looks a bit more realistic.

Overall the trend is not good for landlords in CHCH , declining rents and declining market values, and you couldn't see that coming.....

How many examples do we need of people rushing in when supply is constrained resulting in others increasing supply and then the whole collapsing (oil / milk). This was always going to happen as the housing supply increased in CHCH, prices would eventually start to decline and supply exceeded demand. With the new subdivisions around CHCH popping up like mushrooms supply would eventually exceed demand and house prices would at best stagnate, at worst start to decline or even collapse.

While I don't think prices will collapse - people will just not face the fact that they are loosing equity in their house or houses. They will continue to pay.

There are different housing sectors within Christchurch. The east side of the city is now showing good value growth and only minor rental softening, as this sector was decimated in the quakes/reduced in size by red zoning and will not be replaced with similar lower cost housing. A relative shortage therefore still exists in this part of the city and value growth now higher than the rest of the city is evidenced.

There will always be a shortage in that part of the city - munted infrastructure - roads are terrible - why would you live there. You are talking about two markets - housing and renting. Currently in CHCH according to TradeMe there are 1748 properties for rent in CHCH - sure the uni students are coming back soon and they will take some of that stock, but at the end of the day there is still a large stock of unoccupied rental accommodation in CHCH. While the eastern side of the city maybe going up in value - doesn't mean it always will. I don't have any rentals - don't want them, don't believe in them. You have your own house - if you want to invest in property buy shares in one of the company's that deals with commercial property ( the most likely reason people don't buy shares is they can't save the money in the first place to buy the shares). If you by a rental you are exposed to
one market - if interest rates go up - you are stuck paying a higher interest rate on all your properties - sure you may have some cushion by locking in a fixed rate but NZers are very short sighted and only look a year or two into the future - they do not have a strategic long term view.

'Danger bells ringing for Christchurch'? Hardly. Rents were always going to return to more affordable levels as the residential part of the rebuild winds down and insurance companies stop paying insane rents for relatively short term accommodation.
Yields are still pretty decent in Christchurch and in all likelihood will remain so or improve if prices drop a little. Don't see any possibility of a crash in prices down here though.

If prices drop so most likely will rental income....