Big falls in average prices and the number of homes sold by Harcourts in April - Auckland's average price falls $77,919

Property
Big falls in average prices and the number of homes sold by Harcourts in April - Auckland's average price falls $77,919 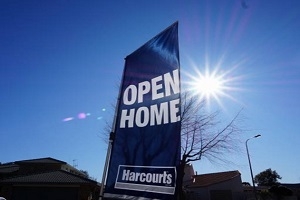 New Zealand's largest real estate agency recorded a substantial drop in the number of homes it sold last month and in their average selling price.

However, the national average selling price in April was still up 5.7% compared to April last year.

However, even with the price slide, April's average selling price in Auckland was still up 8.4% compared to April last year.

Although the average selling price was down in Auckland/Northland, the number of sales made in the region increased slightly to 729 in April from 718 in March, and April's sales were up 10.5% compared to April last year.

The latest Harcourts figures follow on from the latest REINZ figures which also showed a fall in median house prices and sales volumes in many places in April.

In Wellington Harcourts average selling and the number of home sold also fell in April, with the average price dropping from $437,848 in March to $398,983 in April, while the number of sales dropped from 456 to 349.

The only other region to record an increase in the average selling price was Harcourts Central District, which includes the Waikato and Bay of Plenty, where the average price climbed from $392,585 in March to $417,000 in April, up 6.2%, while the number of sales in the region dropped from 592 to 549.

The was also a drop in the number of new listings the agency signed up in April, which dropped from 2665 in March to 2096 in April (-21%), with new listing numbers falling in all regions.

The latest figures suggest the market has started heading into the traditional winter downturn after a particularly strong summer selling period which extended well into autumn.

Does your keyboard have a kiwi accent or do you think dropping termites over Auckland can force house prices down?

From what I see in AKL there is a lot of dross on offer in the market and not much quality. That in part may explain the lower median value.

Yes and it could also be that prices in that part of Auckland have got so ridiculously high that most people have simple given up and are looking else where.

Looks like the market has peaked, until the rates drastically drop to allow people to borrow even more to the hilt.

So glad I got out of this stupid Awklund property market in March ..... this govt has 3 "vested interests" in residential property:

1. Property buyers (does not matter one iota where they are from) who buy for cash or cheap overseas "funny munny" - they don't care, John Key and his ilk want the cash, in other words enzud's version of QE !! . Which in turn brings me to the second group...

2. Local property investors .... can't touch these ones, these are our voting block .... and if you are in this camp, not only is this govt looking after you, it's the taxpayers !! with accommodation supplements and negative gearing tax breaks ...... when is someone going to speak up about this !! ....not on this govt's watch.....

3. Banks ..... need we say more, taking out so much "cash flow" in the enzud economy for mortgage repayments through rents etc ..... but the profits of banks are more important than the growth of the local economy to this govt.....banks are like casinos, they never lose ! ...and if they do, they take everyone else down with them ..... reduce, minimise, pay off ALL your debt folks !!

Not takng too much from this little one month dip

'Interesting' though this isn't reported on the Herald's webpage...

I think most people believe the market has peaked and if it doesn't go down of its own accord the measures will have to come in. Isn't this a repeat of the last time - with Auckland rising, followed by the halo effect then a general decline? I certainly believe that many people have given up on Auckland now and that we will eventually start seeing evidence of that.

Thankfully, given the dearth of high rise buildings in leafy Auckland suburbs , as prices fall , those jumping should be ok physically.

Awesome news! So there is no problem with prices so Wheeler can man up and cut rates!

Why does he have to cut interest rates?

Gee, I don't know. Maybe to achieve his inflation target, relieve a bit of pressure off farmers and drop the value of the dollar.

Your are right! YOU don't have an actual clue. Maybe because you don't even live here eh. The RBNZ target rate is between 1-3% inflation. The RBNZ actually prefer a high NZ dollar because they... like all RB's are big players in the 'carry trade'. And, as for farmers...the reason many have come unstuck is because they think more debt is good, so lowering the ocr will only encourage a few more farming mugs to go deeper. The rest are having their assets assessed by their bankl if not put up for forced sale, and the bank has become farm manager.

The RBNZ actually prefer a high NZD? So how come Wheeler says in every meeting that the $ is too high? The ONLY reason rates weren't cut last month was because of HPI. In case you haven't noticed Banks aren't farmers so why would they want to manage farms? They would rather the farmer did that and made money. Whether the RBNZ play the carry trade or not, the fact rates are stuck at 0% for absolutely everyone says that trade is done.

The drop in the exchange rate to help the dairy farmers would have to be significant and I don't think the RB can drop the interest rates low enough to achieve that without igniting significant inflation. The fact is that the price of dairy products has dropped significantly and no amount of tinkering with the exchange rate can change that. I think your benevolent desire to help the dairy farmers is being used to disguise a more selfish motive. Either that or you are just a troll.

In the name of “shortfalls in aggregate demand,” central bankers have flooded the world with “money” and Credit. Predictably, this unprecedented global monetary inflation has wreaked havoc on financial market behavior and investment patterns, while spurring self-reinforcing asset inflation and Bubbles. And aggregate demand? It is not - will never be - "sufficient". As we’ve witnessed, Credit Bubbles redistribute and destroy wealth. Bubbles distort investment and spending patterns, which in the end ensures too much of a lot of stuff that the general population either cannot afford or does not desire.
http://creditbubblebulletin.blogspot.co.nz/2016/05/commentary-ominous-p…

Hasn't created significant inflation elsewhere in the world and it will be no different in NZ. Rates are going sub 1% and bring it on. I make no bones about it. I've got £400k in a bank account in London just dying to be made into the correct amount of NZD. If Wheeler was achieving his inflation targets (which is his mandate) rates would be there already. If he needs to tinker with loan to income ratios or whatever I just wish he'd hurry up and do it.

A moment's silence please ; for the beautiful farmland carved up into "lifestyle" blocks

Still no mention of this story in the herald...preoccupied with that Bachelor show crap...

And Barfoot and Thompson

The attempts globally to take heat out of housing markets are working quite well with stamp duty and or mortgage caps in place.

In places like the UK the economic growth has been highly dependent on house price inflation to prop up the economy so will be interesting to see how it pans out.

The market is still on fire, especially when you factor in the time of year. Went to an auction up the road the other day for a 1976 property with a CV of $680K and it sold for over $1M. On the radio this morning Auckland property prices up 12% for the year. We are still seeing big percentages on already huge prices. Most people are now making more money on their house each year than going to work. Its got crazy.

They're only making money if they sell - otherwise they're rich on paper.

You can say that about anything like shares or whatever. Sorry but people are getting richer faster than working. If your prepared to sell and move way out of Auckland then your left with a small fortune in your bank account.

Carlos - in your opinion, when and how does it stop being crazy?

The government could step in tomorrow and put the brakes on the runaway Auckland freight train but its not going to happen so no point even talking about the obvious solutions to the problem, your talking to the hand.

Good idea,
We could give the tennants of Auckland boats and allow them to pull up on the beach at Waiheke
I think some are there all ready.

People who have bought in the last month will be pretty thoughtful.

There is DEFINITELY a marked slow down in house values. Having big monthly swings in prices is a tyipical sign of a market that is either at its peak or at at its bottom (I know what I'm talking about)

How do you know what you are talking about? Is this something we have seen historically? when? can you describe the housing/economic environment at the time...genuinely interested.

How do you know what you are talking about? Is this something we have seen historically? when? can you describe the housing/economic environment at the time...genuinely interested.

Right now in Auckland you can still find good buys in the $1million bracket with 5% gross yield, Wellington has good stock of $500k to $1million at 5% gross yield, with interest rates at 4.19% for 3-4 years...all go...for the medium / long term investor...