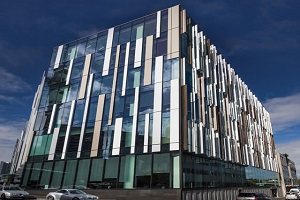 Augusta Funds Management's latest property syndicate is forecast to provide investors with an initial pre-tax cash return of 7%, but potential investors need to be aware of the upfront costs and think carefully about the long term outlook for the building's major tenant.

The scheme is being structured as a limited partnership which will acquire a new office building located on Graham Street, which runs off Victoria Street West in Auckland's CBD, for $115.8 million.

The scheme's start up expenses add another $6.3 million of costs, which takes the total that needs to be raised to $122.1 million, of which $70 million is to be raised from investors (at $50,000 per partnership interest) with ASB providing an interest-only mortgage for the remaining $52.1 million.

Augusta's forecasts show investors should receive a pre-tax cash return equivalent to 7% a year, with increasing rental income pushing that up by 0.25% a year to 8.0% in the syndicate's fifth year of operation.

The cash distributions are to be paid monthly, which makes it likely to appeal to people such as retired folk seeking a regular income stream.

Like most New Zealand property syndicates, this scheme does not offer a redemption facility and does not have a fixed termination date.

Investors will get their capital back when 75% of investor interests (one vote per $50,000 partnership interest) vote to sell the building and wind the scheme up.

If investors want to cash up and exit the scheme early, they can offer their interests privately to other potential investors, although such a sale may be difficult to achieve, particularly if market conditions are unfavourable.

Most syndicates are wound up after 5-10 years, so investors should be prepared to have their money tied up in them for the long term.

The cash distributions investors receive each month will come from the rental income stream and do not include any allowance for capital gains (or capital losses).

Investors will take capital gains or losses when the scheme is wound up and for this reason they should consider the effect its upfront costs will have on their equity.

Syndicates tend to have high set up costs, which come straight out of investors' equity.

The Graham Street scheme has up front costs of $6.3 million, the biggest of which is the offeror's fee of $2.198 million which is paid to Augusta for setting the scheme up.

The other major upfront costs include brokerage of $1.4 million, to be paid to real estate agency Bayleys for selling down the scheme to investors.

And the offer is being fully underwritten by Augusta Funds Management's parent company, NZX-listed Augusta Capital, along with Bayley Corporation, which owns Bayleys Real Estate, and various other entities associated with other individuals, including businessman Peter Francis, who is the father of Augusta's chief executive Mark Francis.

Between them the 11 companies or people underwriting the offer will receive $2.1 million in underwriting fees, with Augusta Capital's share of that being $750,000.

The Graham Street building is being purchased at a discount to its valuation, which helps lift investors' equity and reduce the effects of upfront costs.

That means that based on the property's valuation of $119.85 million, the scheme would have net asset backing of 96.8 cents for every dollar provided by investors.

But some investors prefer to use a property's purchase price to perform that calculation, because a valuation, no matter how well founded, is a theoretical figure, while the purchase price was the actual figure that was agreed between a willing buyer and a willing seller.

Using the purchase price for the property's value reduces the scheme's net asset value to 91 cents per dollar invested.

That will reduce the amount of capital gains, or increase any capital losses, that investors would otherwise receive, when the building is eventually sold.

So the scheme's investors will feel the effects of its upfront costs on their wallets at the end of its life when it is wound up.

Investors should also give some thought to the building's tenants.

Augusta arranged to purchase the building from its developers, Mansons, before it was fully leased, and one floor is still vacant.

To sweeten the deal, Mansons has leased the vacant space until 2025 (with rent secured by a bank bond) while it looks for a tenant.

While that arrangement secures the scheme's rental income, it leaves some uncertainty about the mix and strength of tenants that will eventually fully occupy the building.

Potential investors should pay particular attention to the challenges facing NZME because it is the building's anchor tenant and will provide about 48% of the building's total rental income.

Although NZME's lease runs until 2030, it is operating in a challenging environment and is potentially facing a major restructure.

NZME's main assets are various newspapers and websites, including The New Zealand Herald, plus a stable of radio stations including NewsTalk ZB and Radio Sport.

The current media environment is a tough one and NZME's Australian parent is looking to spin off the company by floating it on the NZX and merging it with fellow media company Fairfax NZ,.

Both companies face similar challenges of coping with falling revenue streams from their traditional newspaper operations while trying to build up revenue from their digital businesses.

But regardless of whether the merger with Fairfax NZ proceeds or not, NZME is likely to be a very different company in say five to 10 years time, when the building is eventually put on the market prior to the scheme being wound up.

And whatever shape NZME is in by then will likely influence the building's value, for better or worse, and effect how much capital is eventually paid out to investors.

The risks posed by the possibility of NZME's financial situation worsening are clearly outlined in the scheme's Product Disclosure Statement, which lists it is a key risk, ahead of the risk of higher interest rates in five years' time when the initial fixed rate mortgage arrangements will expire.

"If NZME and its guarantor were to suffer liquidity or other financial problems of a significant nature, any resulting failure to pay rental and outgoings under the NZME leases would have a material detrimental impact on the ability of the LP [Limited Partnership] to pay returns to investors.

"If the NZME leases were cancelled (and no replacement tenants found, or there was a material delay in re-letting), it would materially impact the capital value of building A, the consequent ability for investors to recoup their original investment, and would continue to materially affect the LP's ability to pay returns to investors."

Below is a summary of the scheme's key features and here's a link to its Product Disclosure Statement.