Today it's the battle of the boom figures.

The government’s claim that the current construction “boom” is stronger than in 2004 is down to a large increase in the cost of house building, with building consents lower than the previous period, the Labour Party says.

Labour housing spokesman Phil Twyford took on Building and Construction Minister Nick Smith in Parliament’s Question Time Wednesday, following their exchange Tuesday. Twyford asked Smith what the larger cause of the current boom was: a 137% increase in building costs over that time or there being 2,185 fewer consents issued.

Smith stood by his statements yesterday: Current activity is valued at $19bn, while in 2004 it was $14bn, adjusted for inflation – a 34.8% real increase. There were two reasons for this, he said. The figure for the current period is not just for houses; it includes commercial and industrial construction. Meanwhile, 2004 was unusual due to a one-off boom in “shoebox apartments” and smaller dwellings, Smith said.

Building costs per square metre have risen more slowly under the current National-led government – 5% per year – than the 8% under the previous Labour-led administration, he added.

Twyford then put to Smith that if building costs were the same in 2016 as they had been in 2004, the value of construction activity today would be $9.5bn. Smith’s reply was that more houses were built in 2016 than any year in the last decade.

Could the Minister confirm that the number of dwellings consented in the last year was not higher than in 2004 or even 1974, but that building costs were, Twyford asked. He further put to Smith that the consent ratio of 6.2 houses per 1,000 people was less than half the 13.1 in 1974 under the Norman Kirk-led Labour government of the day. Smith’s response was that spending was out of control in 1974 and that the boom collapsed in 1976. Current activity in contrast was a steady, ongoing improvement. The industry had just experienced a record period of 20%-plus growth over the last five years, he said.

See a press release from Labour below:

Statistics New Zealand data shows that, far from being a ‘record building boom’ as the Government claims, fewer houses are being consented nationwide and, particularly, in Auckland, than the last peak in 2004. Most of the increase in the dollar value of construction 2004-2016 is because of escalating building costs.

“Nick Smith’s $19 billion includes renovations and commercial building. Only $10.6b is new housing.

“Most of the increase in the dollar value is a result of the blow out in construction costs under National, and the fact that so few homes are being built for the affordable end of the market. The average new home now costs $2,000 a square metre, double what is was in 2004.

“Nick Smith, Steven Joyce and Bill English should be embarrassed by their phoney claim of a building boom. The current rate of consents compared to the population is less than half what it was when Norman Kirk was Prime Minister, and 20 per cent under what it was when Helen Clark was the PM.

“In a time of record population growth, it’s an absolute disgrace that the Government can’t even get house-building rates up to the level we saw a decade ago.

“The average new house costs nearly $400,000 for the building alone, not including the hundreds of thousands for land, GST, and fees. This proves that the average new first home is far beyond the reach of middle New Zealand.

“Labour’s KiwiBuild Bill is before Parliament. It requires the Government to start a programme to build 10,000 affordable homes a year and sell them to first homebuyers.

“All of Nick Smith’s bluster and deception doesn’t get a single family into a house. It’s time to adopt Labour’s comprehensive plan to end the housing crisis,” says Phil Twyford.

The following figures were tabled by Twyford in Parliament Wednesday: 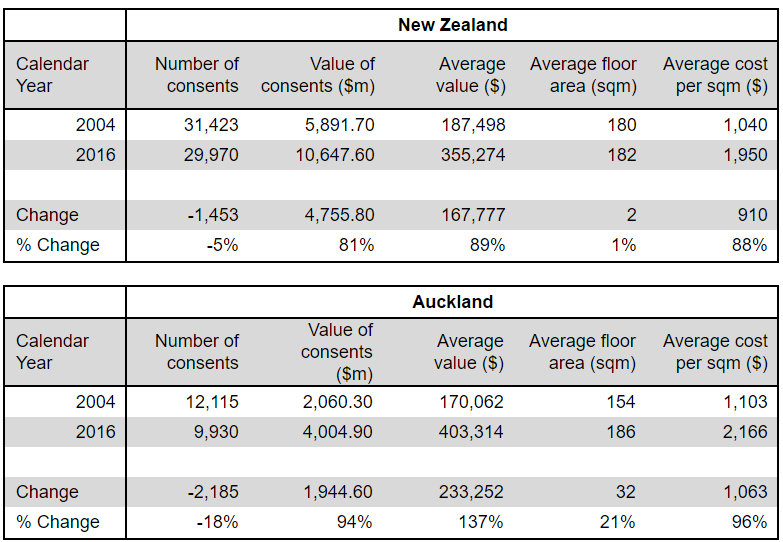 Embarrassing. Nothing more than a tit for tat battle of how many properties and cost growth rates under different ruling parties at different times. Absolutely no inkling on the whys, solutions, It's like being on a sinking ship with Benny Hill at the helm and Benny Hill clones arranging the evacuation.

National making excuses for abject failure. Nothing new under the sun.

Twyford is right, it is inflated costs.

I know you don't want Smiths figures to be right but they probably are. A big invisible is right to occupy retirement accomodation, which shows up in $ but not new dwellings. That activity is truly massive, and probably what will turn this into an overbuild situation. Also the housing market is getting nearer to a capitulation and you can't have it both ways - it's got to mean the supply is getting ahead of demand.

Phil Twyford bringing up Big Norms 74 bubble as a positive example is digging pretty deep too. Everything was completely out of control - highest road toll Year ever too - and it led to a massive hangover.

National is good at manipulating data and lying to people of NZ if denial does not work. They forget that now they stand exposed and " no issue of housing " as per them will take them down.

National: Rent till you die!

In other news; someone who has profited from rampant house price increases and the future generations of New Zealanders being shafted tells a member of said shafted generation to accept it and "be happy."

How's the view from your ivory tower?

*Limited to the upper class, the wealthy and the Boomers.

What seems clear is there is no debate over how to improve the situation from either side, or did i miss something?

I am still waiting to see what Labour's workable solution is ?

Boatman I respect your question. You have been on this site a long time and I don't think you are trolling when you are ask what Labour's workable solution is. I think you genuinely want answers so you can make an informed voting decision.

Given that and given Labour's quite comprehensive Housing Package. Boatman for you where do you think the gaps are in Labour's housing policies?
http://www.labour.org.nz/housing

Yawn one lot blaming the other lot so nothing has changed and nothing will change. The market runs in cycles and will sort itself out. Doesn't matter who you vote for in the next election, do you really think it will make that much of a difference ? If you think its bad now I think Labour has the potential to make things even worse, better to stick with the Devil you know.