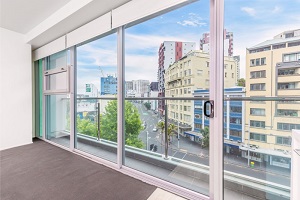 An apartment in an upmarket block in Auckland's Central Business District was sold for $117,000 at a mortgagee auction this week.

The 58 square metre, one bedroom apartment came with a car park and had a balcony overlooking the trees lining Beach Road in the CBD.

It was was located in the Scene One building which has facilities such as a swimming pool, tennis court, gymnasium and outdoor barbecue area for its residents' use.

However the building is one of several in the area on leasehold titles, which considerably reduces their capital values compared to similar properties on freehold titles.

The ground rent on the apartment that was sold was $5778 a year, which was on top of operating expenses (similar to body corporate fees) of $3275 a year and council rates of $1278, taking total annual outgoings to $10,331 a year.

Even so, the $117,000 price achieved at the mortgagee sale conducted by Ray White City Apartments seems like a bargain and there was keen competition for it from several bidders at the auction.

There were three major Auckland apartment auctions this week and results were mixed, with buyers generally remaining cautious and often digging their toes in over price. The larger, better quality apartments that often appeal to baby boomers selling up their suburban houses, tended to sell more readily than the smaller apartments favoured by investors.

Although all of them attracted bids, buyers played hardball over price and all were passed in.

The most vigorous bidding was for a 119 square metre, leasehold, harbour side apartment with a 55 square metre balcony on Princes Wharf, which had ground rent of $15,327 and operating expenses of $18,259, which took total outgoings including rates to just over $37,000 a year.

Although several bidders were keen on the property, the top bid of $415,000 wasn't enough to get it across the line and it was passed in for sale by negotiation.

At Barfoot & Thompson's weekly auction six apartments were offered, (another was postponed) and three were sold and three passed in.

At Ray White City Apartments, seven apartments were offered including the mortgagee sale, five were sold with three being passed in.

The full results from all three auctions, with the prices achieved on the apartments that sold and details of those that didn't sell, are available on our Auction/Sales Results page.

Leasehold property is like radiation - hard to get rid of and expensive to clean up - although unlike radiation it doesn't have a half life, just the opposite - ground rents increase forever and ever
Hmmm I wonder why there isn't much interest in leasehold properties, maybe people are getting smarter and are focusing on the better deals with no lemons involved. Although there will always be someone wanting a leasehold property as displayed by some of the bidding I would't touch it with a uranium barge pole.

Not necessarily. Depending on the contractual terms, the landowner cannot operate like the mafia. But you're right, much of it is about ignorance that finds people buying leasehold properties with the deluded notion that they're "investing."

Yes you are getting a pig in a poke, bit like plaster homes built in the 90's, early 2000's.
You can' be sure what the future holds re costs.

You know leasehold works all over the world , except here .

In Singapore the city provides leasehold land for residential development , and does not rip the people off , it also provides rental income for the city

Hell , even South Africa seems to get this right .

Its a long term solution to our housing crisis too esp for folk who cannot afford land , but could afford a relocatable dwelling

Whats wrong with us ?

The government used to offer cheap leasehold land in New Zealand, partly to encourage home ownership and building. Relatives of mine first got on the home ownership ladder this way.

That was back in the days when the government wanted to foster home ownership, of course. Not just pander to their investor voters. That government came later, once all those folks had got the leg up into property from the more helpful generations of the past.

So over 10 years (assuming no increase in ground rent), that apartment will cost $22,000 per annum.

You can rent a similar apartment in the CBD for similar money. Wonder what rents will be like as more of this apartment build volume comes online.

(Course, depends if the Nats keep opening the floodgates to as many migrants as they can possibly get each year.)

There are 4 comparable apartments for lease on trademe.

Naturally you would want to do your due diligence on possible ground rent increases, sustainability of body corp finances etc.

But If it all checked out ok, buying would look to be a better financial deal. It's unlikely the building itself would be worthless in a decade...

Leasehold property is a bigger noose around your neck than any mortgage.
They are only good for the leasor as they have total control over the occupier.
The lessee has no control over what future rents are going to be!
To freehold the property in Christchurch can cost more than what the land is worth nowadays and when a leasehold property is sold the vendors often want a lot more than what it is worth, therefore they are so hard to sell.
Wouldn't touch them with any barge pole, and you would wonder why people are wanting to buy an apartment that already has so many extras attached to it like Body Corporate fees and then an expensive lease as well?????

As a youngster I bought a leasehold property which the elderly owner sold when she couldn't afford the renegotiated rental. I believe the annual land rental payments were set at 7% of the value. It was great when I was paying 21% for my mortgage. Now it's not so great when interest rates are less than 5%. If the land rental rate bore some resemblance to the market land return that might make it more palatable long term. However, as written above, I now wouldn't touch it with an uranium barge pole.

Checked a couple of suburbs on that auction results site - no listings since mid-Dec but I know there have been auctions. What is the lag in updating?

Using the ever-handy mortgage calculator - the annual rent equates to servicing a 30 year, $90,000 mortgage at 4.5%, forever.

You know what guys, I went to an auction with a whole bunch of work colleagues this afternoon for this amazing property, and it was sold under the hammer!
Guess how much it went for?? Note: it's not in DGZ.
2014 CV = $4.650mil
Homes.co.nz Estimate = $6.125mil
Trade Me Property Estimate = $5.920mil
Sold Today For?? = Please Guess (will be revealed)

I am thinking she must have done her homework and figured 55% over the CV is a fair price for both parties.

Not entirely surprised. The cashed up wealthy migrants will pay up. It is the market that requires 3rd party finance that is suffering.

FFS, what homework? When you are using laundered money the only homework needed is in not leaving fingerprints. The price is paid is a disgrace.

How the F is a house worth 7 million dollars

In that price zone you aren't talking regular migrant Definitely NZ is not alone in being used as a property bank for all forms of money ; grey, laundered,borrowed & legitimate
Why the Chinese supplanted Canadians as US biggest foreign buyers of property.
Why unlike Vancouver , Toronto doesn't want more restrictions on foreign buyers s& why NZ govt keeps the migrant & foreign buyers gates wide open
Pity about the lack of infrastructure having to play catchup
So much for the master of forex future planning
He had none and like his flag idea a failure