Augusta's latest syndicate enters uncharted waters by funding the construction of a new office development for a 7% pre-tax return. Should investors expect more?

Augusta's latest syndicate enters uncharted waters by funding the construction of a new office development for a 7% pre-tax return. Should investors expect more? 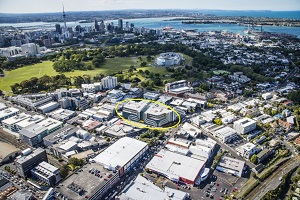 An artist's impression of the building being built at 33 Broadway, Newmarket.

Augusta Funds Management has launched its latest property syndicate which is forecast to provide pre-tax cash returns of 7% a year, although some potential investors may be inclined to take their lead from Oliver Twist and say,  "Please Sir, I want some more."

The 33 Broadway Trust (the syndicate) is being structured as a unit trust. It will own a new $141.6 million office building being built in Auckland's Newmarket, for which Mercury NZ (formerly Mighty River Power) and Tegel Foods have already signed up to be key tenants.

However they do have some drawbacks, such as being unlisted and not having a fixed termination date, which could potentially make it difficult for investors to exit the scheme and get their money back before it was wound up. Most syndicates are wound up between five and 10 years after being established.

Most syndicates also have high set up costs which come directly from the investors' equity, reducing the value of their investment, and 33 Broadway has set up costs of $9.5 million.

The syndicate is offering 1670 units at $50,000 each, raising a total of $83.5 million from investors, with ASB providing an interest-only first mortgage of just over $68 million to cover the balance of the property's purchase price and the scheme's set up costs.

A pre-tax return of 7% a year is nothing to sniff at, and with the major banks currently only offering around 4.3% on five year term deposits, it is understandable that many investors would be prepared to overlook the potential drawbacks of a syndicate for its higher returns.

However some of the NZX-listed property vehicles may also make an attractive alternative, without some of the drawbacks of a syndicate.

Because  Goodman and Argosy are both listed entities,  it would be a straight forward matter for investors to sell units/shares in them if they wanted to cash up, and both had NTA’s which were slightly above their share/unit prices. That means their investors wouldn’t be suffering the loss of equity that high set up costs inflict on syndicate investors.

That may cause some potential investors in 33 Broadway to think its 7% projected return may be a little on the light side.

But investors also have something else to consider.

This syndicate is unusual in that it is not buying a completed building.

The property is being developed by Mansons Broadway Ltd which is part of the Mansons group, one of Auckland’s best known commercial property developers, and construction will be handled by another of the group’s companies, Mansons TCLM.

Mansons is currently undertaking the earthworks on the project, which is not expected to be completed until March 2019.

But the syndicate will acquire the property at the end of next month, by which time the earthworks are expected to be complete,  and the money investors put into it along with the mortgage from ASB, will fund the building's construction.

The offer is fully underwritten, so all of the $83. 5 million being sought will be raised by the time the offer closes on 19 June.

Then on 30 June, $81.6m of the investors’ money will be paid to Mansons to pay for work already undertaken and to allow further work to continue.

Another $8 million will also be drawn down from ASB’s mortgage, which allows the scheme’s start up costs to be paid.

The remainder of ASB’s $68 million mortgage will be progressively drawn down until the project is completed.

That’s a fairly normal arrangement for this type of project, but because all of the investors’ money is put into the development at the beginning of the project, it means that their money is most at risk, while the bank comes in afterwards and drip feeds its money into it, minimising its risk.

That will allow investors to receive their 7% pre-tax returns while the property is still under construction.

The trust will then continue owning the property once it is complete and tenanted, earning its income form the rent.

That sounds straight forward, but the arrangements around it are reasonably complicated.

While it is inherently riskier to finance a property development than to buy a completed building, Augusta has put several measures in place to mitigate those risks.  The main ones are:

From the syndicate’s perspective, all of these measures are good things to have, because they shift much of the risk involved in the development back on to Mansons.

However one of the biggest worries for funders of development projects is that the developer (in this case Mansons Broadway) may strike difficulties and be unable to fulfil its obligations.

For example, although Mansons Equity is required to maintain net assets of at least $150 million while its guarantees of Mansons Broadway are in place, most of Mansons Equity’s assets are unsecured loans to other companies within the Mansons group.

So if Manson's had difficulties in another part of its business, that could affect its ability to meet its obligations in respect of 33 Broadway.

This is spelled out clearly in the syndicate’s PDS, which states:

“Under the terms of the Mansons Development Agreement, development risk is allocated to Mansons Broadway and Mansons Equity.

“Accordingly, provided that Mansons Broadway and Mansons Equity remain solvent, and continue performing their obligations under the development agreement, then the trust is insulated from development risk.”

However, it also states that the syndicate’s investors could suffer a “significant loss” if Mansons Broadway, Mansons Equity and Mansons TCLM were to become insolvent and the Mercury lease was cancelled and the mitigation strategies described above were insufficient to cover all of the syndicate’s costs.

The PDS also states that these losses could occur even if the full amount of the proposed bank funding ($68 million) was still able to be drawn down.

So in trying to assess the development risk of the project, investors need to be able satisfy themselves about Mansons' ongoing ability to meet its obligations.

Manson group is an experienced developer with a good track record and it is generally well regarded in business circles.

But it is a privately owned business and does not release its financial statements, so potential investors in the syndicate must base their assessment of its ability to meet its obligations on the group’s reputation rather than its financial accounts.

'Investors not exposed to any development risk'

“We don’t believe there is any [development] risk, he said.

“We are not the developer, there’s an extremely thorough development agreement between Mansons and ourselves and the risk all sits with Mansons.

“We are not exposed to development risk in any way,” he said.

He also believes that in the unlikely event that Mansons struck difficulties and was unable to fulfil its obligations, the syndicate would be better off financially.

“The way the deal is structured, ironically, financially the best outcome for the syndicate would be for the developer to go broke, because we would then step in with a whole heap of retention that is held back to the end, and development margin which Mansons don’t get until they complete and they would essentially forego, and we would then pick all of that margin up,” he said.

“The syndicate would then be in a position to complete the development at lower cost than what we are paying Mansons because we would retain the margin.

“Now the chances of that happening - it’s just not going to happen,” he said.

But whatever the risks faced by investors, funding the development of a project rather than just buying a completed building adds a layer of complexity to the investment scheme that may be beyond the ability of many mum and dad investors to  properly unravel.

Given that this is a more complicated scheme than most of the traditional commercial property syndicates that have come to market in recent times, it would nice if investors received a slightly bigger slice of the pie, and maybe even a bit of cream on top.

Click on the following link to read the scheme's Product Disclosure Statement:

they cant have a wind up date otherwise IRD will tax for the CG, they normally have a clause that after X years if management decide they can call a vote to wind up