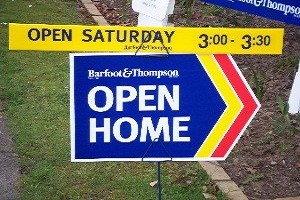 Barfoot & Thompson had a sales clearance rate of 40% at their auctions last week, which probably wasn't a bad result considering how quiet the market has been.

Overall the agency marketed 132 homes for sale by auction and achieved sales on 52 of them by 5pm the following day, with the remaining 80 being either passed in for sale by negotiation, or withdrawn from sale or had their auction dates postponed.

The highest sales rate for the week was achieved at the on-site auctions where 80% were sold, followed by the Whangarei auction which had a 60% success rate and the Shortland St auction on 27 June, which mainly featured homes from Remuera, Ellerslie, Mt Albert, Mt Wellington and surrounding suburbs, where more than half were sold.

The North Shore auctions on June 29 had a clearance rate of exactly one third.

The full results with the prices achieved on individual properties are available on our Residential Auction Results page.

Thanks Greg. Any idea from the agencies about sales figures from non auction listings?

Not sure if 40% is the new 100% in NZ ?
Honestly I live in Nth America & if someone here said that a 40% success rate was great they'd be laughed at
before being fired.
After reading Davids piece on Auckland "International City" this just adds to the ponzi rhetoric

I'm have no idea how many sellers on this thread have been to auction before in the Auckland market, but it is worth knowing that the seller pays for the auctioneer fees regardless of whether the property sells or not and you better hope that your Real Estate Agents has done their homework and brought in multiple buyers before the auction statrts because the seller will pay around $2 to 2.5K even if the property is passed in. That sounds like a great retainer for Real Estate Agents, even in a falling market! I am surprised, given the last few months stats that sellers are still falling for this trick!

Agree with Greg that this isn't a bad result in the context of the slower market this year - and following the major upswing of 2014-2016.

But it's become damned hard to find a good house in Auckland Central - where most of the listings are now for apartments. (Notably, this skewing towards apartments will inevitably pull down the average/median sales price.)

In many cases, house prices are still inching up in the inner-city suburbs. Such stand-alone properties are becoming increasingly sought-after.

Agree with Greg that this isn't a bad result in the context of the slower market this year - and following the major upswing of 2014-2016.

How you can call a 40% clearance rate as "not bad" is beyond me.
A 60% failure rate is a total disaster and augers badly for the future.
These stand alone more or less central Auckland homes of very good size totally bombed out at auction with not one of them selling on the day, most with no bids at all.
What does that tell you?
Link:
https://www.barfoot.co.nz/597841
We are at the cross roads right now. Either the market stabilises or is in for a substantial correction.
Blame the banks tight fistedness, dopey LVR rules, the Bright Line test, anti-Asian sentiment, and general interference in the market by the authorities and politicians for the sagging market as compared to a few months ago.

To be fair.. that looks like a rubbish development

We are indeed at a cross roads BigDaddy. I am a property owner so personally I am hoping to it to stabilise. But I am deleveraging like crazy and bracing for a rough ride.

REINZ data will be out next week. Be interesting to see what that says. I'm paying particular attention to Sale year on year.

Butt ugly built right on the boundary, no outdoor space , all concrete driveway. Not surprised they are not selling at that price, and they have been on the market for a while already - strange to go to auction now. Ockham could have built a beautiful 20 unit apartment block on a piece of land that size.

Could the lack of sales have something to do with affordability?

To be fair bigDaddy, it has nothing (and everything) to do with our government. When the Chinese communist party politburo decided to stem capital flight, that's when the Auckland housing market died.

Yes absolutely agree with you Pat (And Big Daddy to a certain extent). The Auckland property market has certainly die a death since the Chinese capital flight restrictions kicked in a the start of this year.

We're currently dropping -$50k a month from the latest stats and we're are selling far worst than the other gateway cities such as Sydney, Melbourne and Vancouver most likely because we are too far away and clear lack of infrastructure in Auckland.

There's a really interesting article that from The Australian ( May 30, 2017) which supports both your views; Vancouver, Sydney and Melbourne show same property slowdown

Article quote: The three major markets showing the same nervous trends are Vancouver, Sydney and Melbourne. And what is happening in the real estate market is being duplicated in other areas of the economies of Australia and North America.

Because we are a little behind in timing to understand what is happening in Australia, it is best to start with Vancouver. The western Canadian city, like Melbourne and Sydney, has seen enormous Chinese buying of real estate.

In Australia where over the weekend, while the overall auction clearance rates have not been too bad, in Melbourne we saw a relatively high number of houses passed in, in key prestige suburbs like Kew, Camberwell, Hawthorn, Malvern and Brighton.

In Sydney, the upper north shore clearance rate was only 73 per cent while the northern beaches managed just 68.8 per cent. (The west and south west of the city were even lower).

* The last part of the article is very disconcerting.

There are only three (3) houses listed for sale in Ponsonby this morning - in realestate.co.nz.

Yet, Ponsonby is a sizeable and popular enough Auckland suburb. So, what does that tell you (and me)?

Go ask anyone who is hunting for a family home (house) in an inner-city Auckland suburb. The reality is that they're few and far between. (It's the same situation for houses in Wellington city suburbs.)

I would "Go ask anyone who is hunting for a family home (house) in an inner-city Auckland suburb" but they've all taken off to their holiday homes in the Seychelles, in their private planes right now.

Edit: there are 18 listings on trademe

I count 23 listed for Ponsonby for all property types with the newest being listed on 28th June. What search criteria did you use to get just 3 results Tothepoint?

In realestate.co.nz, the search I use is: Auckland; Auckland City; Ponsonby; House.

Go repeat it for yourself.

Your search probably included apartments. There are plenty of listings for apartments. But houses are in desperately short supply in the inner city.

What I do is go to google and search ; REINZ, Sales Data, Auckland City

And I get -37% Year on Year that's really bad. No wonder vendors a giving up.

So if I was to do a search for apartments in Ekatahuna and saw there werent that many for sale, I could assume there is massive demand for apartments.

How many stand alone houses are in Ponsonby? What's the denominator? 3 could be 1% of the stock.

BTW, there were only 6000 people in Ponsonby at the last census... it's hardly a heavily populated suburb, it's largely retail.

How you can call a 40% clearance rate as "not bad" is beyond me. BigDaddy

It's like you think auction is the only way to sell property. It's much better for buyers to use negotiation and set conditions. This is how we have always bought and sold houses generally in Auckland and the big auctions of ordinary houses are a relatively recent thing. When we see contracts depending on the sale of a buyers current property we will know that things are a bit tough but even then not necessarily. Auctions make it hard to move house and encourage the acquiring of rentals when people realise it's easier to rent out your own home and buy the next through auction. Many people refuse to buy at auctions. Auctions are a bad way to buy houses in my opinion.

OK, in light of your thoughts, what does the data tell you? Close your eyes, put your arms out in front of you, wriggle your fingers; and tell us what you see.

I've done exactly what you told me to do (above) and I can see you walking down Queen Street wearing your trousers at half-mast.

The data is telling us that around 40% of houses are selling for good prices at auction. We eagerly await any other sales data that me be imminent. It would be good to see non auction sales data.

I can see very few houses being marketed as being under contract like this one:
http://www.trademe.co.nz/property/residential-property-for-sale/auction-...

Cowpat my dear neighbour, Zachary is probably just referring to the high end suburbs not any other tom dick and harry suburbs.

Sorry my dear other neighbour its across the board.

"good prices" ... for the seller or for the buyer?

Zachary dgz have you seen the updated valuations on homes.co.nz.how did you fair up there? My block in Hamilton came back forty grand.ones in Cambridge went up about twenty each and papamoa went down twenty.looks like it'll be slow going untill the election!

Yeah the July values have been updated just today. My family home has gone up by $50,000 surprisingly (record high so far). If my house were to sell for the median value of homes.co.nz I'll be laughing all the way to the bank as it is way more than double I paid for in the 2000's. My few rentals all went up by between $10,000 and $20,000. I think I will save some the screenshots in case I need to use them for my objections when the new CV's are published in Nov.

You spelt DOWN wrong.

Don't be too hard on yourself, you'll get there =)

My values have all gone up. In total similar to yours DGZ, maybe a bit more although I forgot to take a note of what they were...doh!

Ouch that means higher council rates in a falling market. Not a good position to take on.

Happy to pay a few thousands more in rates as long as the values are kept high.

There're around 263 listings in TradeMe with 'Grammar Zone' at present and my fav is this one: http://www.trademe.co.nz/property/residential-property-for-sale/auction-...