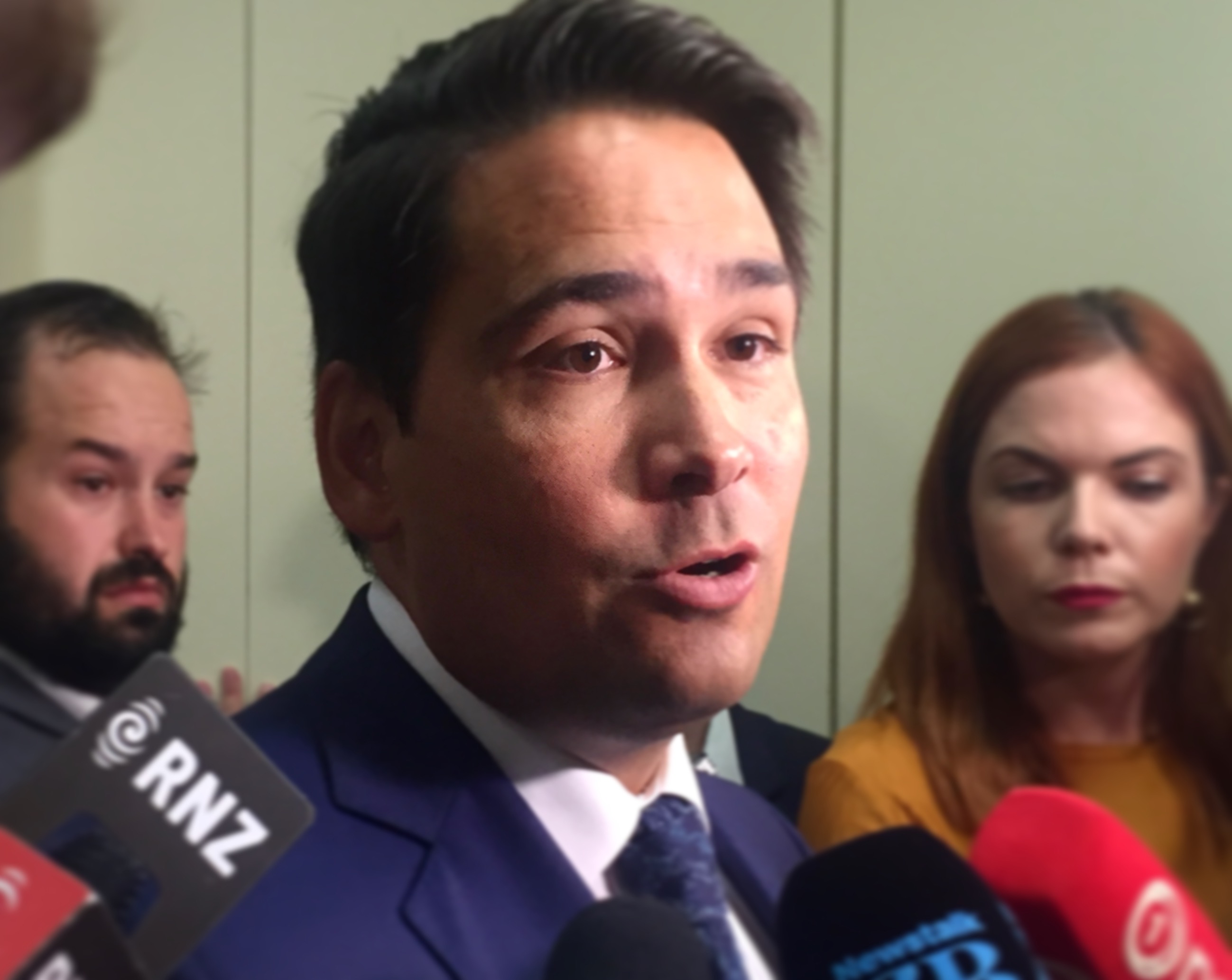 Bridges said that while he respected the RBNZ’s independence when it came to monetary policy (IE setting interest rates), he saw the capital review as a “regulatory function” that Robertson should get involved in.

In terms of carrying out this "regulatory function", Bridges said he didn't believe the RBNZ was "much different to say MBIE or another government department”.

The RBNZ prides itself on its independence. Under the Reserve Bank Act, it is tasked with being banks’ prudential regulator.

It is responsible for “promoting the maintenance of a sound and efficient financial system” and “avoiding significant damage to the financial system that could result from the failure of a registered bank”.

Bridges wouldn’t go so far as to say the Act should be amended to enable the Government to get involved in the regulator’s work, but still took the opportunity to advocate for Robertson’s intervention.

“It’s more at the level of he [Robertson] has a relationship with the Governor of the RBNZ and that board,” Bridges conceded.

“He has a legitimate role in terms of asking the questions and making sure that they [the RBNZ] are thinking through and doing the right work on the positions they take. Here [with the bank capital matter] it doesn’t seem they have.

“He needs to get in and be involved in that.”

Asked by interest.co.nz whether his issue was with the process the RBNZ was using to conduct its review, or whether it was with the fact the RBNZ was proposing banks be made to hold significantly more capital, Bridges said it was a bit of both.

He said if changes resulted in farmers and small business owners struggling to access capital, or pay more for this capital, then Robertson had a “real role to play”.

Furthermore, Bridges believed the proposals the RBNZ put on the table went too far and weren’t backed up by a proper cost-benefit analysis.

Asked whether he was making his comments off the back of being wined and dined by bankers, who the RBNZ warned Robertson would engage in “intensive lobbying”, Bridges said: “I don’t think I’ve had a single conversation with a banker on these things.”

Robertson responded to Bridges’ comments, saying: “I’m clearly keeping a watching brief on the [bank capital review] situation, but the decision-making in my opinion rightfully lies with the RBNZ.”

He said politicians had to be “pretty cautious” about the way they involved themselves in these matters.

Ultimately Robertson said his job was to have oversight of the RBNZ.

He pointed out Treasury was leading the second phase of a review of the Reserve Bank Act to re-look at the tools the RBNZ has as banks’ and insurers’ prudential regulator.

When interest.co.nz in February asked Robertson whether he was concerned the economy could take a hit if tougher capital requirements put banks under so much pressure they restricted lending and/or inflated borrowers' interest rates, he said: “Obviously I look at the health of the overall economy, and I’ll continue to monitor it.

“But I don’t have any advice that would suggest to me that there is a significant issue to worry about here.”

Robertson also quoted RBNZ Deputy Governor Geoff Bascand saying: “While borrowing costs may increase a little, and bank shareholders may earn a lower return on their investment, we believe these impacts will be more than offset by having a safer banking system for all New Zealanders.”

Asked whether this reference signalled his support for the regulator’s proposals, Robertson said: “I want to make sure we’ve got a stable banking system...

“They [the RBNZ] make the decision [on the amount of capital banks have to hold] and I can only go on the advice that I get.”

National’s Finance spokesperson Amy Adams in February told interest.co.nz she believed there was a risk of a credit crunch, but unlike Bridges, didn’t explicitly advocate for government intervention.

“I don’t think I’ve had a single conversation with a banker on these things.” Worded like a lie if ever I've seen one. Decoded: He's been in discussion with bankers, but they didn't talk about some arbitrarily defined thing in his head to allow this lie.

‘Simple’ really should have waited a couple of weeks after the Hisco affair before wading in on this. His master will be rolling his eyes at the ineptitude of the timing of his statements

Time for a Royal Commission?

is he still following orders from JK, interesting how the banks always appoint an ex national party senior party member to the board or senior position.

Who else aside from Key and Power?

Jenny Shipley on the board of China Construction Bank.

"It [the RBNZ] is responsible for “promoting the maintenance of a sound and efficient financial system” and “avoiding significant damage to the financial system that could result from the failure of a registered bank”. Until recently, and the jury is still out on recent changes, the RBNZ has significantly failed the first statement by allowing the economy to be highly vulnerable to banking problems. The size of the four main banks still leaves our economy vulnerable to actions by them, which means that increased and robust regulation is required.

"...“avoiding significant damage to the financial system that could result from the failure of a registered bank”." Without the robust regulation, this statement virtually guarantees the Government will have to bail a bank out if things go sour on it. I wish Orr luck in his efforts to make banks more accountable.

Hopeless. My natural tendency is to the right. But the National party ain't gettig my vote any time soon. Lining up on the side of the banks on this issue is economic mismanagement. Last week they promoted immigration which confirms the incompetence.

Well then there is still The Coalition party .... silent since their launch

They only had to mention they would scrap the foreign buyer ban to confirm that I wouldnt be voting for them again.

John Key: Hey Simon, buddy, you're doing a great job of mirroring my mannerisms. Look, do you think you can do me a favor and convince the RBNZ to go away? Put it back on Labour if you have to. Play your cards right, and i'll let you take pick from one of the many positions we have on our leadership team.

Interesting... I hadn't even considered that he might be lining himself up for a post politics gravy train. Now the motive makes sense.

The number of National folk who do seem to then hit the banks revolving doors is indeed notable. Banks / companies from China.

So he's basically saying to Robertson that these changes might hurt my riskyist mates in short term so you need to rein in the independent RBNZ. And by the way I have nothing of substance to back up me and my mates position.

Such a blatant and transparent act of big bank lobbying. Sure, Bridges hasn't had direct conversations (he says he thinks!) - but there'll be plenty in the National Party who have - and will have told him what to parrot.

Heck even Amy Adams, his finance spokesperson isn't calling for Govt intervention - National are simply pulling his strings and leaving him out to dry. Even his own party aren't behind him.

Good on Robertson for standing strong - he's absolutely right here - this is the RBNZ's job - it's what they're there for and it's the reason they're independant - so that this lobbying crap is kept at arms length. RBNZ even warned that this would happen.

They've clearly tried to lobby Labour/NZ/Greens and got nothing, so Bridges is an easy sell.

Why does National represent every irresponsible financial opinion? Setting aside this current foolishness they borrowed money to spend without any control on where the money was going, and they sold assets that made no sense to sell. Everything from AirNZ shares to one of the buildings in the grounds of Parliament. Why sell a building just to lease it back? It's like some incompetent financial engineering (except they spend the proceeds on themselves).

I stand by my past comments where I've called National the cash converters party. They sell all the country's assets then borrow money to spend on everyday expenses. It's comparable to the poverty mindset.

Fyfe would have been a far better option than Lex Luthor.

Smells of lobbying by vested interests.

I'll trust the Governor of the Reserve Bank over a Polly any day thanks.

Trump leans on Fed.
Bridges taking banks side over risk to national economy.
Really is inadequate.
Party of sound finance eh.... Sound did not used to mean debt and more debt on never never.
Taking away punch bowl... not since 2008 mate.

Them wot knows best, as some on this site are wont to say.

Politicians who think they know better than independent experts. This book is a good read for these days.

But then there's This, from Ian Harrison at Tailrisk, and This from Michael Reddell....both of which rather suggest that the increased capital requirement has grave flaws: a 'thirty billion dollar whim' (Harrison) or inadequately researched/zero cost-benefit analysed (Reddell). So Bridges is in good academic company here.

Not everything that a pollie says is tainted, y'know...there is room for the alternative explanation of Common Sense.

Harrison lost me when it got to the point of saying that the RBNZ had failed to consider " the use of the Open Bank Resolution (OBR) option, which is a partial substitute for capital".
I think this is what the RBNZ is trying to avoid.

Aussie Banks vs RBNZ. Which has more clout and lobbying power and who will win ?
The Revolving Door keeps revolving, the next person to use it is getting ready..

How out of touch is the National party. The RBNZ proposals don't go far enough. We ought to have Glass Steagall legislation in place. Without Glass Steagall the banks will always be able to hold a gun to the governments head via bank deposits. Privatise profits & socialise losses! In my cynical opinion, all the governments fiscal discipline will eventually be used bailing out the banks in the future.

Are we suppose to care what Simon Bridges thinks? You guys crack me up, it's nice to have a little comic relief on here from time to time.

Bridge’s media advisers must be on Judith Collins’ payroll. Why side with Big Banking in light of the Hisco affair and their IRB debacle? Amateur hour stuff. And JC doesn’t look too flash in light of that Nelson slip story. National has some serious credibility issues at the moment and it’s only Mike Hosking who’s keeps them afloat with his Herald vitriol. Mike for PM perhaps? Seriously, JC’s unelectable, so odds are they’ll keep Simple Simon until Luxon’s ready, a JK deja vu.