The bank's net profit after tax for the six months to March 31 fell $253 million to $256 million from $509 million in the same period of the bank's previous financial year.

“Despite the very serious financial impact that will be felt by many as a result of COVID-19, we’re confident New Zealand is well positioned for recovery, having entered the crisis in a sound economic position and having responded to the pandemic very well," Westpac NZ CEO David McLean says.

"Although the impact of COVID-19 occurred late in the half year reporting period, it had a significant impact. Our entire outlook changed in the space of a couple of weeks as the country went into lockdown. This half year result reflects only the early impacts of COVID-19, and our initial assessment of the lending losses we’re likely to see as a result," adds McLean.

• Granted mortgage or personal loan repayment relief to 22,118 customers on loans totalling $7.0 billion;
• Provided $1.4 billion of new lending to 1,129 business customers;
• Converted $1.4 billion of business loans for 1,560 business customers to interest-only or reduced repayments; and
• Received more than 600 applications for Business Support Loans, which are offered through the Government’s Business Finance Guarantee Scheme.

The tables below, covering Westpac NZ, come from parent the Westpac Banking Corporation. 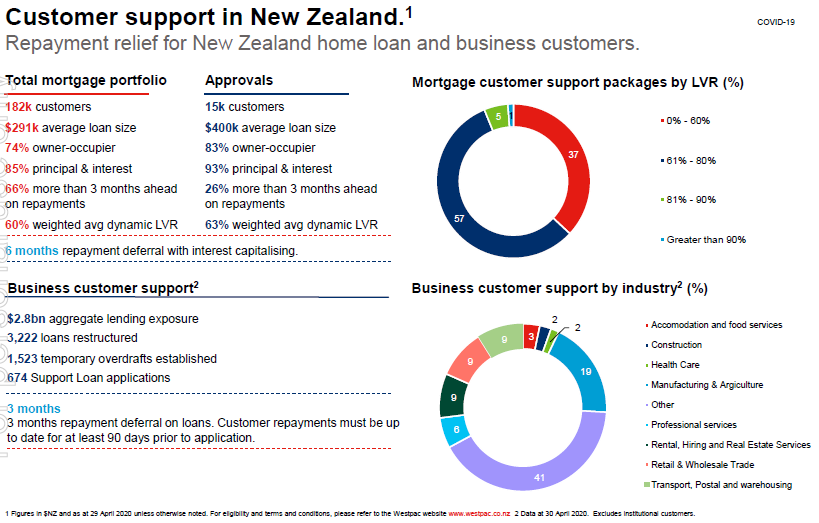 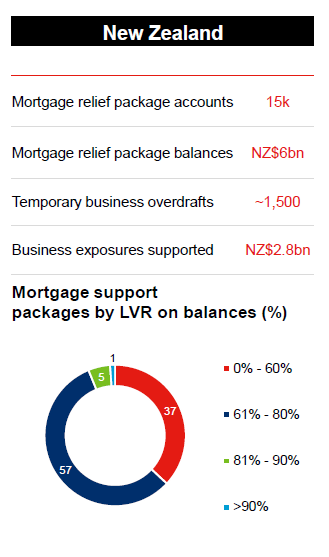 Australian parent the Westpac Banking Corporation has deferred its decision on an interim dividend. It paid a fully franked A94 cents per share dividend in the March half last year. Westpac group interim net profit after tax fell 62% to A$1.190 billion from A$3.173 billion. Impairment charges jumped to A$2.238 billion from A$333 million, with operating expenses up 21% and operating income up 6%.

The Westpac group release is here, and its investor presentation is here.

Six months to March, they're only just getting started!

Those derisory deposit rates they offer hardly represent compensation for the risk undertaken.

Exactly right. Banks should increase their deposit rates or a run on the banks is a distinct possibility. If this goes against the RBNZ's misguided attempts to keep the housing Ponzi bubble inflated, so be it. Why would anybody take a risk for a 2.00% p.a. gross interest? Just to subsidise the fools who believed in the myth of ever-increasing house prices?

Because those fools paid your interest on your term deposit.

100% correct. Depositors are unsecured bank creditors, nothing more nothing less.
By the way, they are only part of the "funding" of a bank; moreover, only part of the bank "assets" are in real estate mortgages: we should not forget that banks also finance the real economy.

Exactly! Depositors are Effectively providing business loans to banks but most do not see this.

Correct! And such loans are unsecured, by the way. However, banks are supposedly safer than other types of business, considering the financial buffers that they have to keep by law, and their "too big to fail" status (OBR or not).

The government has chosen to undermine risk as a basis for cost of money through its loan scheme.

Correct. The government and the RBNZ have effectively made the financial markets meaningless, through this loan scheme, through QE, through a zero interest rates policy etc. Risk is badly under-priced and this will create hugely distortions. The current interest rates curve has nothing to do with the real economy. It must be also said that we are not alone in this, though, as this has been done in almost all countries.
This zero interest policy has created dangerous asset bubbles everywhere. not just in the real estate market but also in the bond and in the share market. The last time risk was so badly mis-priced was just before the GFC, and it did not end well.
I understand the laudable intentions behind this loan scheme, but taking 80% of the risk is way too much. Probably a 50/50 approach would have been less intrusive, and provided enough incentive for the banks to lend without distorting the market too much.

With this and other banks announcing similar seems to me the well run rock solid banks are much closer to what us DGMs have been saying for s while. It definitely has only just started.

Definitely. We were only in lockdown for 6 days (4 working days) of the half year to March - and yet these results look disastrous. A lot of water still to go under the bridge for the full year results.

Please note its mostly due to banking "provisions", they arent saying they actually lost the money yet, provisions are designed to let you write down your loans based on what you think might happen. If you wave your hand and nothing happens that 2 billions lost comes as a gain next financial period. So its like saving losses for a rainy day.

The real question is: are those bank provisions sufficient ? They seem a bit light to me, considering the increase in unemployment and the significant slump in house prices that we will see in the near future (unless you believe the talk of less than 10% drop pushed by real estate agents and/or housing speculators, of course).
But you are 100% correct, provisions do not reflect an actual loss, but an expected likely loss not yet eventuated.

It seems a lot of people were sailing close to the wind with their finances.
It's going to be a tough couple of years as this plays out.

it seems people believe NZ house prices only ever go up so she will be alright then if circumstances change they can always sell and walk away with their capital,

One would assume a lot given they do a lot of corporate lending.

How do they calculate LVR if there has been no sale to establish a valuation? Is it based on the price of the property at last sale or current ratings valuation? On the surface it's all so good to report LVR but unless you know on what basis it's calculated...

Which is why Debt-to-Income is a better metric. It's easier to establish both coefficients. ( and I reckon that's exactly what they'll be doing!)

That will surely bring house prices crashing down, in terms of the maximum they will lend. This isn't looking good.

Very good point. I would like to see forecast LVR figures as a result of a 20% decrease in house prices, for example. The resulting picture would be less comfortable than the current one for sure.

Good that the 256 mill stays with WBC nz with the dividend stops in place.

Any guesses on the one large NZ corporate?

Fletchers are my guess. Its probably not even a going concern.

I am a bit of a novice. Will this make things harder for FHB's? Even if they have secure incomes (Government jobs).

The wife and I have been looking at mortgages (we're going to wait it out but just wanted to see what our options are with 10%). We are both secure jobs.
Banks are now asking for “Documentation that your role and income is not effected by Covid 19”.
Thankfully we are both Government workers and have job security. How many people couldn't get this from their employers? I doubt any hospitality worker could get this document guaranteed?