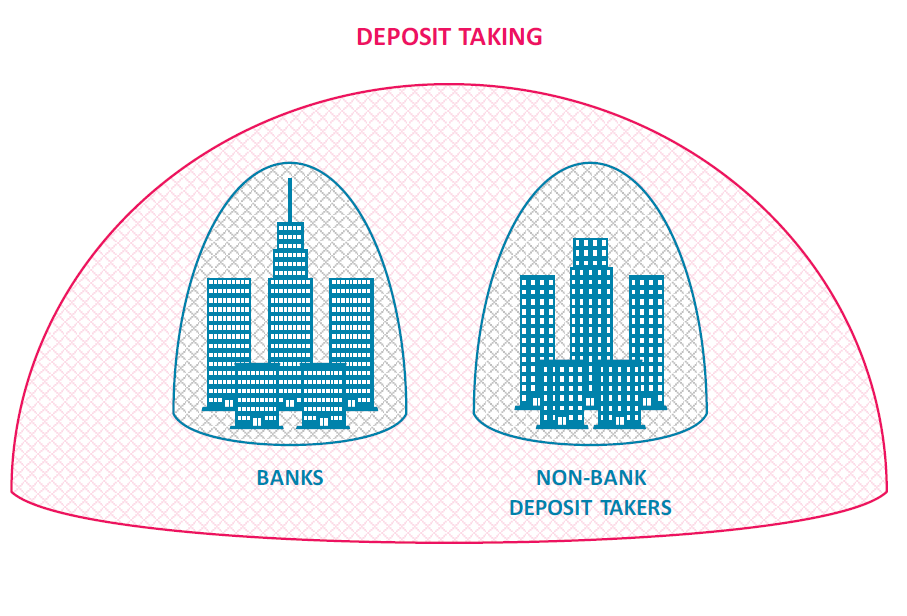 Banks and non-bank deposit takers (NBDTs) may be put under 'one roof', so to speak, if a strong suggestion in the consultation document for the next stage of the Reserve Bank Act review is picked up.

The document and a supporting background paper go into some detail on the possibility and desirability of streamlining the current system that differentiates between 'banks' and 'non-bank deposit takers' such as finance companies, building societies and credit unions, in favour of one system of supervision for all who take deposits. This may potentially also include lenders who are wholesale-funded, though the document stresses that not all institutions would be treated as if they were exactly the same.

"It may improve the efficiency and coherence of the current perimeter to regulate both sectors in the same way.

"This will not be without cost, and feedback is being sought on whether the potential benefits of redrawing the regulatory perimeter are worth the transition costs for those firms affected.

"Any decision to make changes to the perimeter could have material impacts on some sectors. This means that any potential changes will need to be clearly signalled and considered."

The document has identified these issues with the current system:

"To address the above issues, there may be value in consolidating the two regimes into one.

"This would bring New Zealand’s framework in to line with similar models in Australia, where all deposit-taking lenders are regulated as ‘authorised deposit-taking institutions’ (ADIs), and in the UK, where the same entities are regulated as ‘credit institutions’. With a simpler model, there may be scope to make the regime for deposit taking simpler and more growth compatible in the future."

The document says based on the Australian and UK precedents, a framework could be based on:

"An important boundary issue would be whether longer-dated debt securities issued through the capital markets (e.g. debentures) would be considered deposits. They are not treated as deposits in either Australia or the UK. If this approach were followed in New Zealand, it would move some finance companies out of the perimeter for prudential regulation."

The document also suggests such a move could have implications for the management of the RBNZ's macro-prudential tools.

"In recent years the toolkit for prudential regulation has expanded. In New Zealand, macro-prudential policies (such as loan-to-value restrictions on mortgage lending) have been applied to reduce the amplitude of the financial cycle and minimise the likelihood of costly financial booms and busts.

"Macro-prudential tools are currently applied through conditions of registration, and hence only apply to registered banks.

"Moving to a unified deposit-taker regime and a more flexible perimeter would enable the Reserve Bank to apply macro-prudential tools such as loan-to-value ratios more consistently to all lenders, including those currently sitting outside the regulatory perimeter (commonly known as non-deposit taking lending institutions, or NDLIs). This would only be relevant where it was appropriate and meaningful, for example if there were a significant shift of lending towards NDLIs during a period of high credit growth."

The document says moving to a single framework for deposit taking would be a significant undertaking, albeit on a transitional basis. It would take time and would involve making decisions on a number of technical issues. The key issues include:

However, the consultation material does go so far as to include a potential timeframe for making the changes:

On the subject of wholesale-funded lenders, the background paper says they make up a relatively small part of the New Zealand market, and provide important diversity in the financial system.

"As previously noted, they have a different risk profile to retail-funded firms. While wholesale-funded lenders (commonly termed ‘non deposit taking lenders’, or NDLIs) are not currently perceived to pose a meaningful threat to financial stability, this cannot be taken to hold indefinitely.

"It may be preferable therefore, to draw a definition that initially captures all deposit takers that pose the potential to generate systemic risk, and then provide the Reserve Bank with tools to tailor the application of requirements."

The paper says that further work would be required to specify the appropriate treatment of these firms, including potential exemptions (if any).

The paper also says a move to an integrated framework would not mean that the same rules would apply to all firms.

"While creating two-tiers of firms is a possible approach, there is a danger that this creates the perception that certain firms are ‘second-class’. This may harm the ability of these firms to compete."

Depending on risk appetite and investment in Reserve Bank policy resource, the paper says that any of the following arrangements could also be considered as part of an integrated framework:

Call yourself a bank?

Another issue raised is the restricted usage of terms such as 'bank'.

The background paper notes that Australia has recently removed restrictions on the use of the term 'bank' by enabling any ADI to use the word 'bank' in relation their business. Prior to this the use of the tem required separate consent from APRA.

"The rationale for the change is to reduce barriers for new banking sector entrants, specifically early phase ADIs, particularly given all ADIs are subject to deposit insurance.26 The Australian Productivity Commission has noted that differences in naming conventions may have hampered the ability and willingness of both potential new entrants and existing non-bank ADIs (such as credit unions) to compete with banks in some markets."

The background paper notes that the NBDT sector is made up of small and often disparate entities.

"The Reserve Bank currently has a systemically focused high-level objective. If NBDTs are brought into an integrated deposit taking framework, there is therefore a risk that the Reserve Bank would not apply sufficient policy or supervisory resource to these firms, or would implicitly seek to apply regulatory requirements more appropriate to larger entities such as banks.

"While this reflects a genuine concern, it presupposes an inability on the part of both the Government and the Reserve Bank to develop a flexible and growth compatible regulatory framework.

"An integrated framework should be capable of supporting a variety of business models, provided core regulatory requirements are satisfied.

"A strong and well-functioning non-bank lending sector is critical to providing intermediation in niche markets. If executed well, an integrated and competitively neutral framework could make this sector more competitive and resilient."