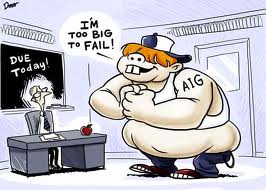 Credit rating agency Fitch Ratings says because the world's official too big to fail banks face higher new capital adequacy standards than other banks, they may be incentivised to cut costs, increase costs for customers and even favour riskier activities to maximise returns, including through new forms of regulatory arbitrage.

A total of 29 banks have been named as global systemically important financial institutions, or too big to fail, by the international bank regulatory body the Basel, Switzerland based  Financial Stability Board. The 29 include five that are registered as banks in New Zealand. All up, Fitch says the 29 may need to raise about US$566 billion (about NZ$745 billion) worth of common equity - a 23% increase on their current combined holdings - to meet the Basel III international capital adequacy rules being phased in over the next few years.

In a report entitled Basel III: Return and Deleveraging Pressures, Fitch says although Basel III won't be fully implemented until the end of 2018, banks face market and supervisory pressure to meet the new criteria ahead of that. The too big to fail banks will be subject to higher capital requirements than other banks under Basel III, requiring an additional Tier 1 common equity buffer of between 1% and 2.5%, on top of the standard 7% Tier 1 common equity ratio.

"Banks will likely pursue a mix of strategies to address these shortfalls, including retention of future earnings, equity issuance, and reducing risk weighted assets," says Fitch.

"Absent additional equity issuance, the median global systemically important financial institution would be able to meet this shortfall with three years of retained earnings, which might constrain dividend payouts and share buybacks."

The five too big to fail banks registered with the Reserve Bank of New Zealand are HSBC, Deutsche Bank, Citigroup, JP Morgan Chase, and Mitsubishi UFJ. The 29 were named last November. See more on them here and the full list below. None of the Australian parents of New Zealand's big four banks - the ANZ Banking Group, Commonwealth Bank of Australia, National Australia Bank or the Westpac Group - are on the list.

Meanwhile, Fitch says the expected capital increase implies an estimated reduction of more than 20% in the too big to fail institutions' median return on equity (RoE) from about 11% over the last few years to 8% or 9% under Basel III.

"Basel III thus creates a trade-off for financial institutions between declining RoE, which might reduce their ability to attract capital, versus stronger capitalisation and lower risk premiums, which benefits investors," says Fitch.

"For banks that continue to pursue mid-teen RoE targets (eg 12% to 15%), Basel III creates potential incentives to reduce expenses further and to increase pricing on borrowers and customers where feasible. Additionally, since it is impossible for regulators to perfectly align capital requirements with risk exposure, banks may seek to increase RoE by favouring riskier activities that maximise yield on a given unit of Basel III capital, including new forms of regulatory arbitrage," Fitch adds.

Fitch estimates the 29 would need to raise the US$566 billion of equity capital to meet a 10% Tier 1 common equity ratio, with the median institution needing to raise US$18 billion. The average shortfall is put at US$19.5 billion. The Fitch report doesn't break out individual banks' needs by name.

The credit rating agency also crunched the numbers on a 9% Tier 1 common equity ratio. This dropped the common equity minimum needed by the 29 by US$224 billion to US$342 billion.

Fitch suggests that the too big to fail banks face a trade-off with higher capital requirements potentially offset by competitive advantages due from their official status as being systemically important.

"Some investors and counterparties might perceive these institutions as more likely to receive government support in a distress scenario," Fitch suggests.

"This perception, coupled with the global systemically important financial institutions higher capital standards, could in turn reduce funding costs and stimulate business flow from more risk-averse customers. Conversely institutions that deem global systemically important status as a regulatory burden might seek to reduce or limit their size and complexity in order to avoid this designation."

The world's 29 "too big to fail banks" as named by the Financial Stability Board: