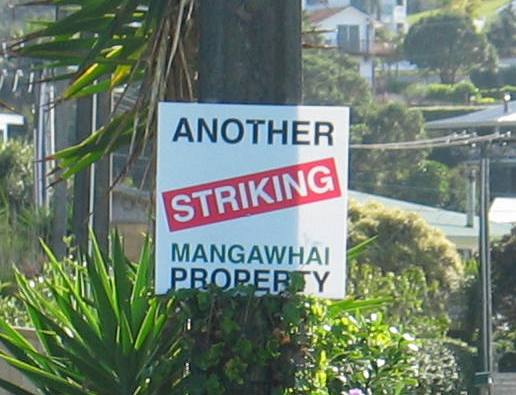 ANZ New Zealand, operator of the ANZ and National banks, and BNZ, combined, hold the lion's share, or around NZ$76 million, of the troubled Kaipara District Council's debt.

The council, under investigation from the Auditor General even though its affiliate Audit New Zealand is under fire for its role as the council's auditor, and had its councillors replaced last week by government appointed commissioners. It's facing a rates revolt, having tried to push through huge rate rises after a cost blow-out in a debt-funded, botched sewage and wastewater scheme in the east coast town of Mangawhai, and the council has acknowledged legal advice from Simpson Grierson pointing out it collected NZ$17.3 million of rates illegally.

The council's long awaited, just released annual report for the year to June 30, 2011 shows total debt of just under NZ$82.9 million. Of this NZ$75.9 million is through bank loans. A council spokeswoman told interest.co.nz ANZ holds about NZ$52 million to NZ$53 million of this, with the balance - NZ$22 million to NZ$23 million - with BNZ.

The rest of the council's debt comprises NZ$6.6 million of local government stock and NZ$360,000 attributed to forestry loans.

Of the council's debt, NZ$58 million stems from the wastewater scheme. The council lists NZ$9.3 million of its debt as current, which means it was due for repayment within 12 months, but says all of this was expected to be fully refinanced on maturity dates - that were before June 30 this year.

The annual report says the interest rate on the wastewater scheme is set monthly, being the bank bill rate plus a margin of 55 basis points.

"All term liabilities, including a NZ$5 million bank committed cash advance facility in respect of Mangawhai wastewater, are secured by either rates levied by council, property rentals or future harvesting of trees from council's forests."

The annual report notes the council has a number of financial challenges and risks primarily because of its high level of debt. Nonetheless, it says the council has "reasonable expectation" that Kaipara District Council has adequate resources to continue operations for the foreseeable future.

The annual report also makes an estimate on the potential impact of the rates strike, which was launched after ratepayers received proposals of estimated 31%, on average, increases for the 2012-13 year, earlier this year. The council has since revised this down to 19%.

"A simple comparison of the number of properties with (rates) arrears exceeding NZ$50 as at June 30, 2012, as compared with June 30, 2011, suggests that there may be in the order of 900 ratepayers participating in the rates strike. If there were 900 rates strikers and they withheld rates for a year then that would equate to approximately NZ$1.8 million in rates being outstanding each year," the annual report says.

It says the council's 10 year plan forecasts its external debt dropping from NZ$79.6 million to NZ$60.6 million over the decade.

"Given its level of debt council is reliant upon the ongoing support of its bankers and having access to sources of external borrowing. In its long term plan council has indicated that it will seek to borrow from the Local Government Funding Agency as a guaranteeing local authority."

In an email sent to ratepayers yesterday the Mangawhai Ratepayers and Residents Association advised them not to pay any rates to Kaipara District Council.

"Keep the money aside. It may eventually have to be paid, but DO NOT GIVE IT TO THE COUNCIL UNTIL THE STRIKE IS OVER- WE’LL TELL YOU WHEN," the email reads.

"You no longer have an elected council. The Kaipara District Council has been replaced by a commission of four government appointees. They will be there until 2015."

"The council was forced to resign by the government because of debt. The debt level is roughly NZ$100 million dollars, or more. The figure of NZ$80 million is used, but that includes NZ$20 million that was taken from you in illegal rates and is being called revenue (asset), when it should be called expense (debt). This district is the most indebted per capita in New Zealand, and it has one of the lowest income levels per person."

The email goes on to say that the debt was illegally incurred, and we (ratepayers) weren't consulted.

"We reject the former council’s proposition, echoed by the government, that 'the debt is the debt, and it must be repaid'."

The email suggests there are about 12,000 separate rateable properties in the district, giving an average debt of NZ$8,400 per property.

"If the council goes belly up and can’t pay, the lenders will go after as much as they can get from every property until they are repaid," says the email.

It adds that the debt was incurred without ratepayers' knowledge or consent, and is with ratepayers and their descendants, indefinitely.

"You cannot pay it back, cancel it, or reduce it. You wear it; because that is the way the law in this country is written. Regrettably, nothing prevents the council or the commission from increasing this debt by as much as they choose. The only way you could get rid of it is if you elected a council who took the necessary steps to eliminate it."

The only option now open to ratepayers was to "starve" the council of money.

"Some people will say; 'But you have to pay rates, it’s the law” 'That was true when those setting the rates were playing their part and obeying the law, but it ceases to apply when the authorities cease to show any respect for the law they are sworn to uphold. There is no legal basis for the rates, because the rates resolution was passed in relation to an illegal Long Term Plan. DO NOT pay any KDC rates demand. The interim one sent out due on 20th September is illegal because it is based on earlier ones acknowledged to be illegal. The next one you receive will also be illegal because it will be based on an illegally adopted long term plan. Until all of these illegalities have been corrected you should NOT pay rates to this council Take no notice of their threats. It is all bluster."

The email concludes saying Kaipara residents will start paying their rates when the legality of the debt is sorted, the illegal rates are sorted and refunds made and that a new legal and consulted long-term plan -is developed and passed on June 30, 2013.

"A new plan must be based on adequate notice, community consultation, and an opportunity for hearings so commissioners listen to the community’s views."

The council has a charge on property until the rates are paid (superior to mortgage lenders, i think). I doubt the banks have anything to worry about.

Yes, council can demand the land owner's lender to pay them. If rates were voluntary probably would be lots more rates strikes.....
I would have thought voting for the right people a more prudent approach

There are some very important but complex legal issues in this area. If the Council were to be declared insolvent and a receiver appointed, then the receiver could have access to the ratepayers though rate demands. We are not yet at this stage.
But there are other financial responsiblities that the Council needs to take into account in setting a rate, and we could find a situation where the debt is considered legal in terms of the debt being owed even if the Council acted outside of their authority, but then the Council being unable to strike a rate due to these other common law requirements.
Thus I would not be immediately assuming that a bank debt secured by rates is a free meal ticket for the bank.
Then one might also consider what sort of due diligence the lenders undertook before agreening to the loan. These lenders cannot be considered inexperienced, and a detailed understanding of the Local Government Act 2002 and its obligations on Council to consult and be compliant with the LGA should be expected.
Then we have the vexed issue of clean audit reports from Audit NZ that lenders could claim they relied upon in their assessment of risk for KDC. Where does that take us in terms of responsibility of Central Government?
Many more free lunches for the lawyers before either ratepayers are freed or the banks paid.

"the receiver could have access to the ratepayers though rate demands."  I must admit its only recently I realised the possible extent of this.....so in effect the reciever has the ability to recover all the losses 100% plus expenses from ratepayers even if they lose their homes in the process.
nice.........not.
regards

Very good point Kane - but worth noting that the rates strike for those who do have a mortgage is a moot point. We used to get rates demands through at the bank for those that didn't pay and we were obliged to pay within 30 days from memory.

Interestingly, it was a very good indicator on whether a business was having cashflow issues prior to seeing it in an OD going over its limit.

Good on you Kaipara ratepayers.  Make the Councillors who made the stupid decisions pay for their mistakes.  When will Dunedin ratepayers follow Kaipara's lead?

From what I have read, the above issue reeks of corruption and illegality more than the sewage the debt is suppose to clean !!

It is high time New Zealanders start full time picketing their local councils and Goverments bodies to show their disguet....just whinning about it on TV and newspapers won't help any bit.

The same applies to ALL local councils from Auckland down to Dunedin.

Reeks of corruption? An understatement. The simple sniff test is the build cost $58 million, which on completion, is valued at $38 million. For that to happen there has to be some sticky fingers in the till. Brings to mind Basel Brush's recent example of a buyer paying $1.5 million, sight unseen, for a house valued beforehand at $800,000. All is not what is seems.

The problem in Dunedin is a total lack of investigative journalism. The Otago Daily Times has to be threatened with the Press Council before it will publish anything critical of the Stadium.  Our rates bills still make it appear that the whole thing is only costing us $66 per annum, rather than the $400 plus that is the reality. National media do not appear particularly interested in the whole debacle. Today I heard that an Auckland Marketing Company was paid over $650,000 to try to generate some private funding for it and did nothing more than generate a couple of reports suggesting we aim for Papal visits and Highland Tattoos. The whole sorry saga is mired in incompetence, conflicts of interest and the old boy network and ratepayers in the main appear blissfully ignorant that they have been totally shafted.

Hi AberdeenDunedin. This certainly sounds interesting and you seem knowledgeable about the situation. I'd be keen to hear more - gareth.vaughan@interest.co.nz. Cheers.

Where to begin, Gareth?!  I'll email you the latest stuff and there is plenty more to be had if this whets your appetite.