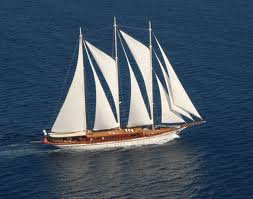 Sailing back: Credit Sails investors will get some money back after a Commerce Commission settlement.

The companies behind the disastrous Credit Sails bond, including Forsyth Barr, have agreed to cough up NZ$60 million in a settlement with the Commerce Commission - without admitting liability - for the mostly retail investors who tipped in NZ$91.5 million in 2006 and stood to lose almost all their money after their bonds became a spectacular victim of the global financial crisis (GFC).

The Commerce Commission says companies involved in establishing the settlement fund include both Forsyth Barr Limited and Forsyth Barr Group Limited, France's Credit Agricole Corporate and Investment Bank, the Cayman Islands-registered Credit Sail Limited and Calyon Hong Kong Limited. In an announcement of its own Forsyth Barr says the contributions to the settlement are confidential.

The Commission says it concluded Credit Sails was marketed and sold in a way that is likely to have breached the Fair Trading Act in that:

• The representations that Credit Sails were "capital protected" were misleading and deceptive;

• Credit Sails were marketed to the average investor;

• Credit Sails were highly complex and unsuitable for the average investor;

• And the companies who marketed and sold Credit Sails ought to have known that the product was unsuitable for the average investor.

"The companies have not admitted liability and do not accept the Commission’s views on matters arising out of its investigation," Commerce Commission chairman Mark Berry says.

“In our view there were sufficient grounds to file legal proceedings under the Fair Trading Act against the companies who promoted and sold Credit Sails. While the Commission could have issued proceedings, those proceedings would likely have been lengthy, costly and with no absolute certainty of a successful outcome,” Berry says.

“We believe that a settlement fund of NZ$60 million, available to investors from March next year, is an excellent outcome. We expect this settlement to restore eligible investors to around 85% of their original investment in Credit Sails."

"A trustee will be appointed to distribute the settlement fund to eligible investors. Investors do not need to contact Credit Sail Limited, the Commerce Commission or the other companies – the trustee will write to all investors within the next 30 working days," the Commission says.

The settlement comes after the Commission confirmed an investigation two years ago. The Commission says it has agreed not to take legal action against the companies or any individual advisers, advisory services or other parties arising out of its investigation.

The Forsyth Barr managed, NZX listed and Credit Agricole organised Credit Sails bonds raised NZ$91.5 million from the public in 2006 before crashing spectacularly during the GFC.

Among the about 3,000 Credit Sails investors, enticed by the prospect of 8.5% annual interest over the six and a half year life time of the notes, capital protection, and an AA credit rating from Standard & Poor's, were several charities and community groups including the Hospice Southland Charitable Trust, the New Zealand Methodist Trust Association, the Youth Development Endowment Trust, the Roman Catholic Bishop of the Diocese of Dunedin, the Congregational Christian Church in Samoa and Dunedin Orphan's Club. Investors' had to stump up a minimum of NZ$5,000.

“It is crucial in relation to complex financial products that investors are provided with accurate information, particularly about the risks of a product. We believe these mostly elderly investors bought Credit Sails because they were told that their capital was protected,” said Dr Berry. “Consumers must be able to rely on representations made," adds Berry.

The proceeds raised in the Credit Sails, or Credit Saleable Index Linked Securities, offer were invested into notes known as the Momentum CDO (collateralised debt obligations) Europe Limited Series 2006-16. Credit Sail also entered into a total return swap with Credit Agricole Corporate and Investment Bank, formerly Calyon, so it could - in theory - pass the return from any capital gain at maturity and interest, to Credit Sail.

Forsyth Barr has 'worked tirelessly' since the Credit Sails demise

Credit Agricole acted as arranger of both the Credit Sails and Momentum notes issues, was counterparty to the swap, and calculation agent. Forsyth Barr was the lead manager and underwriter of Credit Sails.

Forsyth Barr managing director Neil Paviour-Smith says since Credit Sails bit the dust in 2009, his firm had "worked tirelessly" and applied considerable resources to work with the Trustee (New Zealand Permanent Trustees Ltd), Calyon and subsequently Credit Agricole Corporate and Investment Bank, the Commerce Commission and "other regulatory authorities" to examine why the product failed and also whether anything could be done to restore investors’ capital.

“It is a generous pay-out that recognises the extraordinary market turmoil during the Global Financial Crisis, a desire to find a timely solution to the Commission’s investigation and the risks investors assumed by subscribing to the offer," says Paviour-Smith.

“We have always believed that we have complied with the Fair Trading Act and do not accept the Commission’s views that some representations may have been construed as having breached the Act. Nevertheless as the Commission has stated, proceedings arguing the case would have taken a considerable amount of time and would have come at considerable cost to all parties. Furthermore it would have prolonged settlement and provided no certainty to investors who, like us, are keen to put Credit Sails behind them," Paviour-Smith adds.

Forsyth Barr paid its share of the settlement last week, which was a "significant" sum.

“Clients all across New Zealand place their trust in Forsyth Barr. We take our responsibilities very seriously. Our role and focus on driving for a settlement, and ultimately our financial contribution to the settlement, demonstrates we are worthy of that confidence,” says Paviour-Smith.

Brought down by Lehman Brothers, Iceland's banks & others

In an NZX announcement in May 2009, Credit Sail's then sole director Giles Le Sueur informed investors' they'd effectively lost the shirts off their backs.

"We wish to inform you that the Calculation Agent for the Momentum Collateral Securities has sent a notice to Credit Sail Limited advising that, as of May 11, 2009, the Aggregate Loss Amount in the Reference Portfolio is equal NZ$560,611,787.32 following the occurrence of several credit events," Le Sueur wrote.

These "credit events" included the demise of several companies the Credit Sails portfolio was exposed to including Lehman Brothers and Washington Mutual, Icelandic banks Landsbanki Islands, Glitnir banki and Kaupthing banki, plus the bankruptcy of US phone directory group Idearc.

"As the Aggregate Loss Amount exceeds the Maximum Loss Amount, the nominal amount of the Momentum Collateral Securities will be reduced to zero on the Scheduled Maturity Date," Le Sueur added.

"The holders of Credit Sails will not receive their principal back and the Credit Sails will be redeemed at zero, plus the holder’s pro rata share of the residual monies, equal to NZ$1,067,239.14, plus interest which was produced upon the unwind and termination of the Credit Strategy on November 17, 2008. For each note with a denomination of NZ$1,000.00, the pro rata share of the residual monies shall be NZ$11.66, plus interest, due on the Scheduled Maturity Date."

The Commission’s investigation has included liaison with the Financial Markets Authority, which Berry says is aware of the Commission’s settlement and has agreed not to take action against the companies in light of this settlement.

Brilliant decision! Great move!!
Not exactly 'happy campers', the investors, but being made almost whole should provide ample solace.
HGW

Will NZ'ers continue to use Forsyth Barr after it has been shown that they rip off their clients.

Fantastic news re Forsyth Barr and Credit Sails.  Congratulations to Greg Marshall at Logic Funds, Sinead Sinnott and her successors at the Commerce Commision.
Re Forsyth Barr.  I would not go near them, there is lots more that I could say.

The trick was that an insurance premium was presented as a yield (on the sum insured) that then compared to deposit interest rates at the time.

We think more they saw what happened to the Grange (bought by Lehman) wreck in Oz.

FEDERAL Court has found the Australian arm of failed Wall Street bank Lehman Brothers breached its fiduciary duty advising a group of local councils and charities to take little more than a ''sophisticated bet,'' and has ordered millions of dollars in compensation be paid.


For students amongst us Grange was the brain child of some including ex Fay, Richwhite types
http://www.mosscapital.com.au/index.php?option=com_content&view=article&...
Glenn Willis
Chief Executive, Moss Capital
Glenn Willis is co-founder and Chief Executive Officer of Moss Capital. Glenn has extensive industry knowledge with over 25 years experience in the Australian and international capital markets, with significant expertise in:

Prior to Moss Capital, Glenn co-founded Grange Securities and led the team in his role as Managing Director and CEO. Grange Securities was a pre-eminent Australian investment bank with businesses in fixed income, equities, corporate finance and funds management. Grange Securities grew to be Australia’s major independent fixed income house.
After 12 years of strong growth, Grange Securities, a business with approximately 150 personnel, was acquired by Lehman Brothers International in 2007, as the platform for Lehman’s Australian operations. Glenn was appointed Managing Director and Country Head in March 2007. In 2008, Glenn was appointed Vice Chairman of Lehman Brothers Australia.
Glenn previously held the positions of Head of Fixed Interest at Fay Richwhite and Head of Securities Trading at Challenge Bank.
Active in the community, Glenn is a supporter of the Standing Tall youth mentoring program and is a Director of the Stewart House Advisory Board.
Glenn is a graduate of Curtin University, Perth, WA with a Bachelor of Business, in Economics and Finance.

The CEO of Lehman Australia was Glenn Willis. Willis founded Grange Securities, the boutique bank which had the bright idea of flogging CDOs to gullible government agencies.
In 2007, near the height of the boom, Wall Street's fourth biggest bank splashed $120 million to acquire Grange.
Sensibly, Grange chairman Tony Berg took Lehman's cash for his stake but Glenn Willis took scrip and was locked in with reams of shares which were worthless a year later.

and this is fun:
http://www.crikey.com.au/2012/09/26/kohler-throw-the-gaming-act-at-deriv...
Most of the time derivatives aren’t financial hedges at all, but bets brokered by liars masquerading as advisers. Law makers should follow the Lehman judgement and label them accordingly.

and this is just a good read:
http://www.brisbanetimes.com.au/nsw/fact-and-fiction-blur-the-lines-in-d...