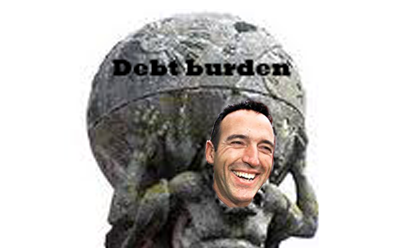 Graeme Hart, New Zealand’s richest man – or most indebted, depending on how you look at it – appears to be getting his debt-fuelled global packaging empire back on a more even keel.

Forbes, which measures Hart’s wealth at US$5.3 billion – making him the 229th wealthiest person on the planet – has recently commented that Hart was “showing signs that he is having trouble keeping his packaging empire together. In September 2012 Moody's cut the credit rating on his Reynolds Group, by one notch, citing concerns with the company's massive debt of more than US$18 billion".

However, the financial 2012 year-end figures released today for his massive conglomerate Reynolds Group Holdings, suggest that while Hart's debt burden would give many sleepless nights, the overall performance of the business is coping and the position for the business has actually strengthened in the last three months.

It still has negative equity, it still owes US$18.14 billion, its net interest bill for the year was US$1.4 and it is still losing money - but not as much. It's loss for the year was just US$18 million, down from US$443 million a year ago. And the performance shows a significant improvement on that reported only three months ago.

Revenue was US$13.83 billion, up from US$11.82 billion largely reflecting the impact of the acquisition of Graham Packaging, with full-year revenues included for the first time.

The company's cash flow statement showed it generated positive net cash from operating activities during the year of US$918 million, meaning it was holding US$1.56 billion in cash, up from just US$597 million the year before.

Shareholders funds were still in the minuses, at negative US$203 million, compared with US$181 million last year, but this is again a significant improvement on the US$522 million shown at the end of the September quarter.

Hart, who began assembling the packaging empire in 2007, operates like a private equity firm. Typically the private equity operators put in small amounts of capital, borrow hefty sums and then get the businesses acquired to service the debt, looking to eke operational improvements out of the acquired business till it is ready for sale.

Reynolds' debt exceeds its operating earnings of US$2.65 billion by 6.3 times. Reynolds chief executive Tom Degnan signalled during a briefing for analysts that the target was reduce that debt to earnings ratio to 5.5 times, though he didn't give a time frame.

It is to be presumed that Hart may eventually look to sell out of Reynolds Group, either by a sharemarket listing, or by selling the business to a trade buyer. Another alternative could be to break it up and sell off the various divisions, but since considerable time and effort has been concentrated on bringing all the businesses together that's unlikely to be a preferred option.

Since floating Rank Group on the New Zealand sharemarket in 1986 Hart, 57,  has bought and sold many businesses, including Government Print, Whitcoulls, Burns Philp, Goodman Fielder and Carter Holt Harvey.

He has enjoyed the fruits of his success with a large house in Auckland's Glendowie, property on Waiheke Island, a 190-foot yacht, Ulysses, which is reportedly for sale, to be replaced by a superyacht called Weta, and an island in Fiji.

Would love to know what it was that lit a fire under the guy's butt. Maybe some pointy-headed professor at Otago frowned and told him his business plan was impossible, akin to laying down a challenge. In any event, would love to run into him one day.

Tall poppy cut him down.

No - things are going just fine at Reynolds and Rank Group.