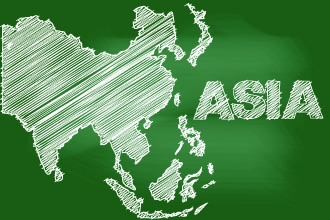 Analysts at JP Morgan are casting doubt on the success of the ANZ Banking Group's push into Asia over the past six years, saying its returns have lagged those of its Australasian rivals over most key metrics including revenue growth.

"We conclude that (ANZ) returns have lagged across most key metrics including revenue growth despite above-peer exposure to the higher-growth Asian region," Manning, Anand and Ahuja write.

Manning, Anand and Ahuja say a clear message coming through is that a domestic focused approach such as CBA's or Westpac's has proven to be more profitable than ANZ's Asia push.

"This outcome is consistent with NAB's decision to aggressively target the domestic mortgage market since early 2011 and also ANZ's recent shift in approach highlighted by CFO Shayne Elliot earlier in the year to deploy incremental capital back into the Australian region," the analysts say.

Mike Smith, the ANZ group CEO who is a former HSBC executive and took the reins in October 2007, set out

Target for Asia to be bigger than NZ narrowly missed

his plan for Asia to be as big a profit source for ANZ as New Zealand within five years at the 2007 annual general meeting two months later.

"Our aspiration is that over the next five years, we can develop Asia to a size where it is as big as our New Zealand business," Smith told shareholders in December 2007.

He set a target for ANZ to lift the percentage of its group profit sourced from the Asia-Pacific to 20% by 2012 from 7% five years earlier. Over the same period he saw profit generated from ANZ's New Zealand operations dropping from 22% of group earnings to 20%. (See Smith's full speech to the 2007 ANZ AGM here and a presentation accompanying it here.)

Smith detailed ANZ's "Super Regional Strategy" in September 2008 saying the aim was to shift the bank away from a collection of standalone product and customer businesses to simpler, larger business structures aligned with the geography and customers they serve. He said it would reduce the management layers between him and staff serving customers' from up to 12 to about seven.

At the time Smith said after 15 years of economic growth ANZ was heading into a "very different" environment.

"Our new structure puts ANZ into the best possible shape to take advantage of this new reality and accelerate our progress towards becoming a super regional bank and more customer-focused."

Smith will have a chance to defend the Super Regional strategy when ANZ reports its annual results, for the year to September 30, on Tuesday, October 29. It's expected to post cash earnings of about A$6.473 billion, versus underlying profit of A$6 billion last year, when ANZ said its APEA unit provided 21% of group revenue.

In their report the JP Morgan analysts say key questions for ANZ's management include; Are the relatively lacklustre returns thus far part of the necessary drag to achieve the required scale in Asia? And can ANZ now deliver higher growth after its initial investment phase through higher returns on equity, or has the nature of Asian banking changed since 2007 to the extent the return profile and related growth prospects aren't as attractive?

ANZ is targeting making 25% of its earnings from Asia by 2017. Manning, Anand and Ahuja note the bank's APEA division accounts for A$1.3 billion, or 16%, of their ANZ 2017 earnings forecast. This means another A$700 million would have to be found to reach the 25% target. They acknowledge their forecast is A$300 million below the consensus analysts' forecast as measured by Bloomberg, but even this is still shy of ANZ's 25% target.

'Discussion about foreign investment infused with emotion, paranoia and sentimentality'

Meanwhile, in a speech to the the Japan-Australia Joint Business Conference in Tokyo this week Smith said Australia’s national discussion about foreign investment had again become "infused with emotion, paranoia and sentimentality."

"Perhaps this isn’t surprising given foreign investment in agriculture - and sometimes even in mining and manufacturing - seems to be at odds with how we think about ourselves as a nation. It’s almost as though we’re abandoning our agricultural heritage or giving up long-loved brands which play so closely upon our memories," Smith added. "However foreign capital is critical to economies such as Australia."

"The truth is, if our national savings had to cover our capital needs, we would not have the capacity for essential investments in areas such as welfare, health, education and housing. In my view, capital goes where it is welcome and when Australia turns away foreign capital, we turn away opportunities."

These comments echo ones he made to interest.co.nz in November last year, albeit with New Zealand substituted for Australia.