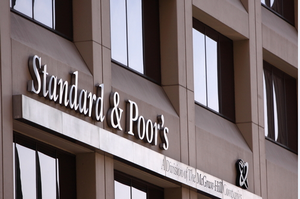 Credit rating agency Standard & Poor's has put Fonterra's "A" long-term and "A-1" short-term credit ratings on CreditWatch with negative implications. It says any downgrade would be of one notch.

As of January 31 Fonterra had $7.191 billion of net interest bearing debt and a gearing ratio of 51%. For the six months to January 31 the co-operative's net finance costs were $303 million. See credit ratings explained here.

Standard & Poor's Ratings Services said today it has placed its 'A' long-term and 'A-1' short-term ratings on New Zealand-based Fonterra Co-operative Group Ltd., and its associated debt issues, on CreditWatch with negative implications.

"The CreditWatch placement reflects our concerns regarding potential weakness in Fonterra's key financial metrics given its high debt levels at a low point in the global price cycle. This follows Fonterra's announcement of a lower forecast milk price due to weak demand and surplus supply in the global dairy market," said Standard & Poor's credit analyst Brenda Wardlaw.

This ongoing weakness in the global dairy market has occurred when Fonterra's debt is at very high levels due to a large acquisition and peak capital expenditure, placing downward pressure on Fonterra's key financial metrics. While the lower forecast payout to its supplier shareholders supports our view of the co-operatives' superior financial flexibility, the likely weakness in its key financial metrics in the short term may place downward pressure on the credit ratings on the company.

On Aug. 7, 2015, Fonterra announced a revised forecast payout for the year ending July 31, 2016, of NZ$3.85 per kilogram of milksolids, down from the opening forecast of NZ$5.25 per kilogram of milksolids announced on May 28, 2015. We view the reduction in the forecast payout and advance price as ongoing evidence of Fonterra's superior flexibility in price setting for its key raw material, milk.

We also viewed favorably the announced sizable reduction in capital expenditure (NZ$500 million-NZ$600 million lower than that in 2015), which should temper the deterioration in Fonterra's key credit metrics during this challenging period.

However, high debt levels reflecting the sizable acquisition of a shareholding in China-based Beingmate, combined with peak capital expenditure, at this low point in the dairy price cycle will place Fonterra's key credit metrics under pressure in the short term.

Fonterra also announced support for its shareholder farmers, given the difficult market conditions. This support for supplier shareholders will be in the form of a loan (up to NZ$0.50 per kilogram of milksolids). The loan will be interest-free for two years and paid back when the farmgate milk price or the advance rate goes above NZ$6.00 per kilogram of milksolids. In our view, the loan to suppliers implies there may be limited headroom to lower the payout at the bottom of the global price cycle.

However, we note that loan payments will be phased as savings from the co-operatives' transformation program are delivered. Further, we expect that Fonterra will conservatively manage the level of advance payments, loans to farmers, and dividends during this challenging period. Ms. Wardlaw added:

"We expect to resolve the CreditWatch following a review of Fonterra's financial results for fiscal 2015, which will provide further visibility on the level of buffer in its key financial metrics. The CreditWatch negative indicates that we could affirm or lower the ratings on Fonterra following our review. We would expect that if we were to lower the ratings, the downgrade would not exceed one notch."

“Fonterra has taken proactive and positive steps to maintain the financial strength of the Co-op. We have continued to exercise financial prudence and discipline in challenging times for dairy globally.”

• Progressing well with our business transformation that will deliver significant one-off and recurring savings for the business.

“These measures reinforce our sound financial position and are enabling us to provide support to our farmers during this difficult period of low global dairy prices.”

“While current global prices are unsustainably low, we take a longer term view of the cyclical nature of the international dairy market and have confidence in the fundamentals for dairy,” said Mr Paravicini.

I had a sneaking suspicion that this would happen!

Unless Fonterra has control of beingmate sell it. Is going to be a dog
in a online society.

absolutely. But they got beingmate through another deal - not sure if it was in return for product sold, or as a "entry deal" to the market, or for "handshaking" with VIP's in the Chinese bureaucracy.

Whether they can sell... Might not be allowed to by Chinese government, if Fonterra wish to continue trade in China. Pressure might even be put on for Fonterra to acquire more to have "proper Chinese representation in China" (the US do similar).

Also if they sell now, the market has been collapsing. You're supposed to realise profits on the top/upswing, not run on the down.

Question is how much work have they done to put Annum/beingmate into the online market?
Given that the internal modern Fonterra/fencepost (farmer side) webpage is one of the singularly _worst_ web pages I have seen since mozilla released their first browser, I'm not holding out hope. Far more likely Fonterra will leave it to the Chinese supermarkets to take care of the retail end - do they know any Chinese supermarketers?... oh what a surprise (shame there's nothing in it for NZ)

This will be the first downgrade of many

If I recall Prof Woodford aright, fontera has debt far higher than 51%. They use a tricky debt+debt: equity reporting ratio. Them silly townies that paid fontera for (non voting) unit-"shares" should be a bit nervous about now. They are effectively subsidising Shareholder interest free loans!