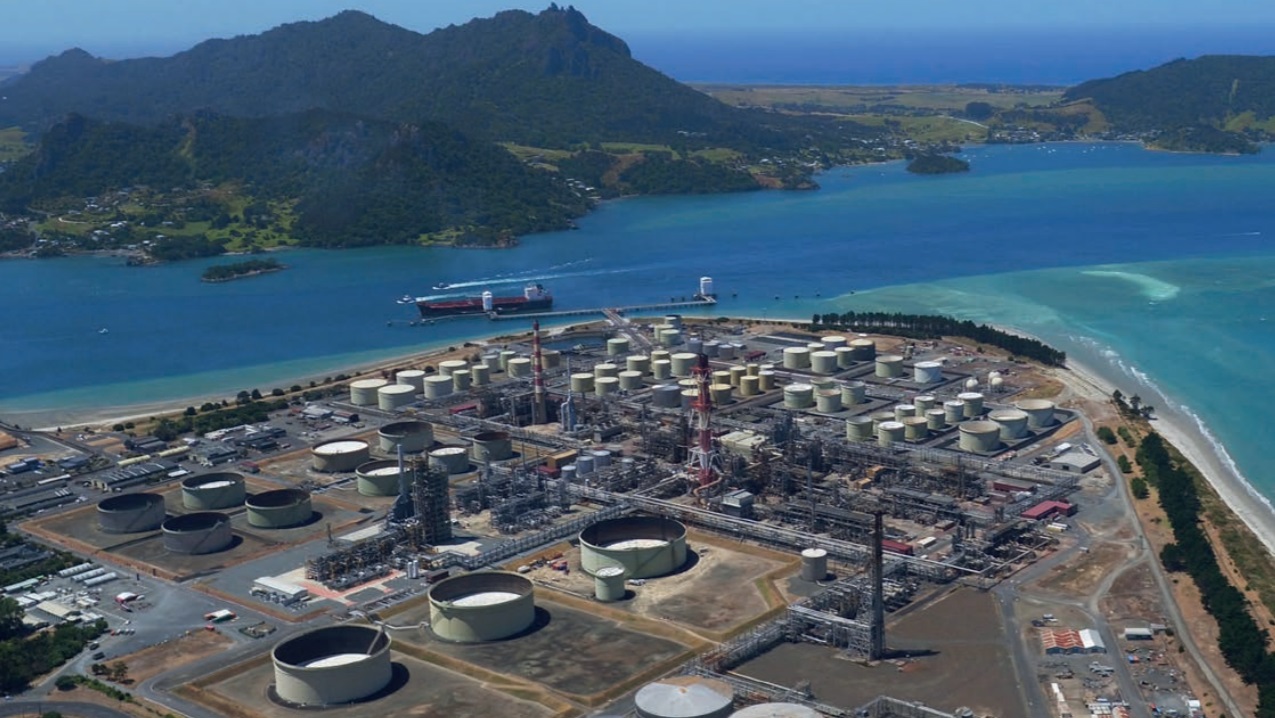 The owner of New Zealand's only oil refinery at Marsden Point in Northland, Refining NZ, seems to be targeting next year to convert the refinery to an import terminal only.

Meanwhile the company has announced a net loss after tax of $198.3 million for the year to December, including the previously announced (after tax) non-cash impairment of the refining assets amounting to about$158 million

Refining NZ appears to have clearly favoured converting the plant to an import terminal since announcing a strategic review last year, but is still at this point taking the line that no decision has been made - even though it is negotiating with customers over terms for such a conversion.

The refinery has been producing about 70% of the fuel used for transport in this country.

In an update issued to NZX on Wednesday Refining NZ chief executive Naomi James said the company had "made significant progress assessing the potential for a future transition to an import terminal".

"While no decision has been made, we are giving this proposal serious consideration and working closely with our customers, lenders, and our team. Any decision to convert to an import terminal would require approval of non-customer shareholders," she said.

"We are engaged in commercial negotiations with all of our customers to negotiate terms that are both fair to our non-customer shareholders and acceptable to our customers."

Refining NZ will continue to work with the other refinery users, Z, Caltex and Mobil, to agree commercial terms, with the aim of reaching a final agreement with all customers by the end of the first quarter of 2021, she said.

Converting to an import terminal would result in a 98% reduction in carbon emissions for the Marsden Point site. It would also make an about 5% contribution to New Zealand’s total emission reduction commitments, James said.

“There is still a lot of work to be done yet, and the earliest possible time for conversion is currently 2022.

"However, we need to use the time we have now to put in place the plans needed to support a smooth transition. We are working closely with the local community and Government to develop plans, which will minimise the impact of any future change, on our people and the Northland region."

The company says its planning includes the opportunity to "repurpose the Marsden Point site as a fuels and energy hub", with the potential to support future production, storage, handling, import and export of energy sources including biofuels, sustainable aviation fuel, hydrogen, LNG and electricity.

“An import terminal would require a much smaller footprint than our current operations, and opens up the potential to significantly repurpose for a large industrial site strategically located next to a deep-water harbour and close to New Zealand’s largest population base," James said.

"We will continue to engage with our staff and stakeholders as we progress this work and we will keep everyone informed as plans develop."

On the annual result, James said: “The results reflect an outstanding effort by the Refining NZ team who responded quickly and decisively to COVID-19 - finding new ways of running the refinery, reducing the year-on-year cost base by c.$80 million, while delivering the Company’s best safety performance on record. I am proud of what the team has delivered under such challenging business conditions.”

Strategically, is it appropriate that NZ has no fuel refining capacity? The Australian government is determined to keep some capacity through subsidy, I think they will have only 3 refineries left, is NZ unconcerned? And of course the whole argument about reducing carbon footprint is a little specious since those emissions will be generated by refineries elsewhere in the world.

Gull currently imports all it's fuel, so the business model is proven. NZR is a tiny and comparatively inefficient refiner. NZ is, as you'll be aware, on a drive to focus on reducing local emissions and 5% is a big chunk.
Of course the employees and contractors at NZR are merely a snapshot of the costs involved, but probably prophetic.

The whole emissions argument is specious as I said. Unless NZ consumes less petroleum products, those refinery emissions will simply be generated elsewhere in the world. It's simply exporting your carbon problem elsewhere - but heh, form over substance. And the argument about raw economics is not what I am talking about here, it's about continuity and strategic reserves argument, say if a war or disruption were to erupt anywhere near Singapore etc.

ACB I'm afraid NZ isn't very good at "strategic planning". You only need look at the debacle going on with LG provision of core services

Recall NZ produces about 15 billion barrels of crude oil annually? Does that get refined at Marsden and if so on closure, will it then need to be exported for refining and shipped back pro rata more or less. Same question applies for Australian natural oil resources, much larger scale of course. Just asking out of curiosity.

None of NZs very high grade oil (sweet light) gets put through NZR - the twats that owned the Maui field (and others) didn't buy refining rights so it's all exported now. Had they arranged refining rights 30 odd years ago we'd probably be self sufficient - thanks Fletcher Energy and co.

One other point I was told many years ago is that the plant at Marsden Point is built for heavy crude, not the high quality stuff we produce so it couldn't be refined there anyway. But i agree with you in that there was an opportunity to be close to self sufficient.

Correct murray. NZR is set up to refine the cheapest crappiest oil it can get - heavy sour. It could easily have been converted (they built a new hydrocracker a few years back) but there are far too many vested interests preventing the conversion

Another thought is - does it suit them to export the crude from a profit/tax transfer point of view?

Clarify "them" Chris. NZR is effectively a "toll processor" - it doesn't own the crude

In theory, as a member of the IEA, we have an obligation to hold a 90 day reserve but the strategic reserve New Zealand does have is predominantly based on contracts offshore and not a physical on-shore reserve that would be "ready to rock".

Without any new domestic drilling or refining? Well, I don't like to dwell on that thought. Let's pray to the petroleum Gods for no supply disruptions or rapid price hikes.

I see Beach Energy and NZOG just relinquished the prospecting licences they had off Dunedin - sign of things to come?

No it is not appropriate. If we learned anything from COVID it is that resilience is vital for the country, and although fossil fuels are hopefully being phased out, they will still be needed for many years to come, and may even continue to be vital for our economy. So to stop refining there is foolish at best.

Looks pretty profitable if they can import 3 billion litres/year at margins somewhere close to the MBIE ones...

Is it that simple?

"It would also make an about 5% contribution to New Zealand’s total emission reduction commitments..."

As the name implies global warming is...global, whether refined here or somewhere else isn't material. This would just be an example of another wealthy country off-shoring emissions instead of actually making the commitment to genuinely transforming our economy and society. It would only confirm the views of those who are most cynical about this effort.

Couple of things Squishy.. NZ is hardly what could be called a "wealthy country", Developed yes - wealthy not so much. NZR is relatively inefficient so offshoring production could be argued as a net benefit. Unfortunately now all the bitumen for roading will be imported, the CO2 capture will be imported and the sulphur production (critical for Ag production) will also be imported. Trouble is, NZR is a struggling and almost stranded unit - it's in a bind

Don't worry mates, the Aussies will save us if anything happens to the supply- they've been sending our mates back every Thursdays even in a Pandemic, we can rely on them.

We can also try flying our planes and running our boats with batteries. Can't wait to see a Westpac rescue helicopters running on Tesla batteries. What a green dream.

Looking forward to the Navy going green. We'll fight the Chinese with AC75's

They just need to work on their capsizing part and load it with guns.