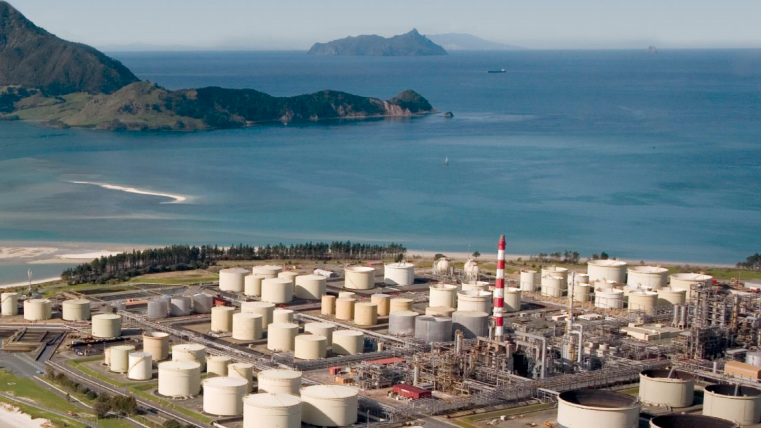 The operator of New Zealand's only oil refinery has confirmed a decision to revert to an import-only terminal from April 2022.

The "final investment decision" made by the Refining NZ board follows approval for the move being given by the company's shareholders in August 2021.

The final decision by the board will see the Marsden Point, Northland, site  transition to an import-only fuel terminal, called Channel Infrastructure, from April 2022.

Refining NZ said the move follows the signing of long-term terminal services agreements with all three of its customers (bp, Mobil, and Z Energy) on terms approved by shareholders in August.

Chief executive of Refining NZ Naomi James said this was "a momentous day".

"After 60-years of operations as New Zealand’s only oil refinery, we now have certainty about our future, and as we look back on the past with pride, we also look to the future with confidence that our business will be able to continue to contribute to our community, and New Zealand, long into the future.”

The company said work was "well advanced" to prepare the Marsden Point site to operate as an import-terminal and to plan for the safe shutdown and decommissioning of the refinery.

"In recent weeks we have started the process of making appointments for the team who will be responsible for managing the transition, and decommissioning, as well as longer-term work with Channel Infrastructure," James said.

"I want to acknowledge the professionalism and dedication of our whole team over the past 18-months throughout the period of our strategic review, refinery simplification, and the past few months, over the latest lockdown.  Our team quickly adapted to ensure that we were able to continue supplying New Zealand with fuel, safely and as planned.

"Today’s announcement won’t impact most New Zealanders, however, it will have a huge impact on our people, and our community, and we are implementing a range of transition support measures to assist those who will be moving on to other employment after we transition.

"This is a key focus for me personally, as I know that we have some of the best talent in the country working on our site, who will continue to play a critical role in the ongoing operation of our refinery over the next six-months.

"I am committed to supporting them through this time to find new jobs, or training opportunities – so they are ready to move to new jobs, when we become Channel Infrastructure, and we are working with other businesses to skills-match our people with their vacancies for the period after we transition."

The latest statement from Refining NZ made no direct reference to staff numbers.

However, a 160-page explanatory booklet released for the proposal that was distributed to shareholders ahead of the August meeting and deicison said the current Refining NZ workforce of 300 is expected to reduce over the two years following commencement of import terminal operations to approximately 60.

"During this transition period, there will be an ongoing requirement for a workforce to support the shutdown and decommissioning of the refinery site, execution of the capital projects and other transition related activities. Workforce planning remains subject to employee consultation," the booklet said.

It makes no mention, however of contractors, of which there have been large numbers too.

"This is the first of several new growth opportunities we have identified for the future of Channel Infrastructure, and we look forward to providing further updates on other site repurposing opportunities in due course."

I'd be more worried about the lack of resilience.

Industry is a relic of colonialism. Good riddance.

BL - that's an oxymoron. If you're not doing industry, someone else is doing it for you. Presumably cheaper than you could, meaning either closer to slave wages, or in worse conditions, or both.

Umm okay.  I was being facetious.

I'd have thought local refining would be a strategically important capability until we go electric. Much like holding the SPR.

This is a short-sighted strategic mistake; making NZ more vulnerable.

why is it a "strategically important capability"?

In what circumstances would the worlds refineries not be falling over themselves to sell to us, but crude suppliers would?

Access to crude is why we have the SPR.

Strategic Petroleum Reserve, an amount of oil pre-purchased in case there is a supply shock.

Why would a navel blockade let crude in but not petrol?

Why not have SPR contracts for petrol instead of crude?

"As of 2008, New Zealand has a strategic reserve with a size of 170,000 tons or 1,200,000 barrels (190,000 m3). Much of this reserve is based upon ticketed option contracts with Australia, Japan, the United Kingdom and the Netherlands, which allow for guaranteed purchases of petroleum in the event of an emergency"

For example in the event of conflict it may well be that major powers could keep crude moving using a convoy system to intercept threats but would need to route it through local refineries.

Alternatively, in the event of a conflict it may well be that major powers could keep refined fuel moving using a convoy system, but would need a local import terminal.

It seams we imort the crude we use in this refinery anyway. Our crude has to go to Australia. So we will still need to import crude if there is a global shutdown in shipping.

From Wikipedia - the most trusted source.

The refinery uses a medium-sour blend of crude oil, nearly all of which is imported. Most crude oil produced in New Zealand is light-sweet and is exported to refineries in Australia. Marsden Point produces 70 per cent of New Zealand's refined oil needs, with the rest being imported from Singapore, Australia and South Korea.[3]

Crude oil bought by Marsden Point Oil Refinery is shipped to the deep-water port at Marsden Point, near Whangarei for refining into transport fuels for New Zealand.

The Marsden Point Oil Refinery is responsible for supplying:[4]

Front of the queue aye

Doesn't seem wise.  Even though it might be more costly in the short term, I would have thought that covid would have taught us something about resilience.

Should we also be importing raw sugar cane plants and refining the sugar here intead of importing sugar?

What about PC parts?

On the plus side, 230 million kWh of electricity that was used for refining will be freed up

It has just been offshored.

Or we use it as an opportunity to divert it to replacing the some of the oil. Although that would require some sort of joined up thinking.

what's the time unit for that figure?

Seems like the Labour government is not just persistent in destroying sovereign independence but also transitioning the employed onto the Jobseeker payroll on WINZ.

Ok, I'll bite. In what way does this private shareholder decision have anything to do with the current Labour government?

If they own 51% of the shares in the refinery just like they do on Airports and Sea ports, we wouldn't have to lose this strategic capability.

So you think the labour government should be nationalising this asset?

The government doesn't own 51% of our air and sea ports.  Perhaps you are thinking of the hydro power companies?

"If they own" They do not. The assets were given to the oil companies in 1984.

These companies are all multinationals mainly owned by wealthy oligarchs outside of NZ. You don't make as much money on crude as you do on fuel.  This is all about American and British refiners making the most of their refining assets while they still can, capitalising on the value added markups of fuel over crude.  I would imagine the major owners of NZ refining are also not NZers.