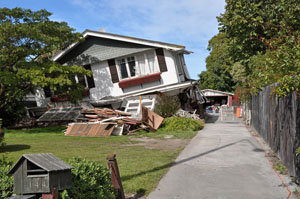 The revamped Resource Management Act could prevent the most vulnerable being left out of pocket as the supply of affordable housing increases, the Insurance Council of New Zealand (ICNZ) says.

The Government has proposed to include the management of natural hazards in the updated legislation.

The ICNZ maintains this will prevent budget housing from being built on land prone to the likes of flooding, erosion or liquefaction.

“Insurers take the long view and our concern has been that in the necessary push to increase the supply of affordable housing, poor quality land that is highly vulnerable to natural hazards would be released for development," ICNZ chief executive Tim Grafton says.

“It is reassuring to hear the intent is to avoid these becoming the platform for future disasters.”

ICNZ has been advocating for the Government to write legislation that recognises the fact New Zealand’s third on a Lloyds Global Underinsurance Report list of countries most vulnerable to the impact of a natural disaster as a percentage of GDP.

The Canterbury earthquakes cost the country about $40 billion dollars, equivalent to about 20% of GDP.

“There has been this vague assumption that risk reduction requirements are managed under our main piece of planning legislation, the RMA, but the term ‘risk reduction’ is not mentioned in the Act and nor is the management of natural hazards.

Environment, Building and Housing Minister, Nick Smith, recognised this loophole in the existing legislation in the speech he gave on the RMA on Wednesday.

Referencing the Bexley subdivision in Christchurch, he said:

“Hundreds of pages of reports and submissions were written on the effects of this housing development covering birdlife, landscape, coastal impacts, effects of recreation, effects of Maori cultural values, but nowhere did any official consider the effects of land liquefying in an earthquake like what occurred in 2010 and 2011.

“This was despite this risk having clearly been identified by council natural hazard experts.

“I’m sure the people of Bexley and the taxpayers who ended up with a bill for hundreds of millions of dollars would have much preferred the RMA process gave more attention to the earthquake risks than the more esoteric concerns the law required them to focus on.”

Grafton says more information about the risks and hazards of different properties need to be made available, before the market can reasonably set the price.

The ICNZ points out that currently, information about all types of natural hazards doesn’t have to be disclosed in Land Information Memorandum (LIM) issued by local authorities.

This masks market signals that would encourage people to retreat from risk-prone areas.

Grafton recognises migrants are particularly at risk at the moment, as they may not be aware the glitzy property they’re buying in a new subdivision, has been built on swamp land, for example.

“Liquefaction won’t even be in their vocab.”

He says national guidelines for risk tolerance are also needed to help local councils make decisions that are consistent with each other.

Let's see how they deal with the fact Wellington is built right over a major and active fault line while Auckland is in the middle of an active volcanic field. CHCH on a swamp and Dunedin exposed to major Tsunami.

Haven't been so smart as a nation have we.

Potential risks are known and we live with them until they happen - when they do happen, the risk is often then reduced.  So we strengthen buildings now because of earthquakes in Chch. Ditto tsumai japan, up goes the sirens on them ChCh beaches (and practice drills for a few months till we get distracted cause nothing has happened).
We are still ignoring large tsumai risks all along our coast (Kaikoura/Coramandel)  Once the event happends, we will react, whereas the 'risk' will have in fact reduced for another xx thousand of years..
We are not rational.

The Government is in complete denial about what the real causes of housing inflation are.

RMA concerns are relatively minor in the scheme of things.

1. Development contributions being around $30k plus in the big cities.  These are just a pure tax and skew developers away from smaller sized units and cheaper sections towards developing more upmarket and more expensive properties (as costs are essentially the same irrespective of size or quality).  On top of that the way they are calculated makes single unit developments (adding one extra dwelling) almost unviable when comparing to the effective discounts multiple unit developments get.  Yet most small affordable sites aren't big enough for multiple, so it has made many unviable to develop.

2. Re zoning for higher density in existing housing areas actually lowers the supply of affordable homes.  Why?  Because for example in a suburbs where a $250,000 is demolished and replaced by 2 $400k townhouses which are smaller and less suitable for families, it obviously immediately increases prices and secondly reduces the supply of the homes on larger sections which increases the price of the remaining existing homes.  It also increases the number of buyers as developers now are buying in the area, and also more investors are buying as they perceive the area changing and prices increasing...

3.  Centralisation.  Moving government departments and associated businesses into the big cities and out of the regions has put unnecessary pressure on those big cities.  Expanding back office roles in small cities like Dunedin, Invercargill, Timaru, Wanganui, Palmerston North etc etc would push employment into places where you can buy a good house for $250k and there is actually an oversupply of housing.

4.  Completing an utter balls up in ChCh demolishing undamaged red zone homes for what purpose? While driving up rents 40% plus was a stroke of utter incompetence.  Could have been entirely avoided if one mans ego wasn't as big as his waistline.

5.  Sorting out the state housing mess in Auckland.  With such a large stake in the housing stock in the fringe central suburbs (Glen Innes, Mt Roskill, Mt Albert etc), the rundown state houses have created a noose around central Auckland where inside it is incredibly valuable, yet in that outer ring it is relatively undesirable.  Restructure Auckland state housing and solve the problem.

The Christchurch situation (highly varied pockets of riverine silt interpsersed with gravel bars and peat) was very well known by the early 1990's:  see for example this paper, where the uncomfortable conclusion was reached that (final para of Summary) "the draft code may underestimate shaking by a factor of 2 or more".

This makes the Bexley, Atlantis (yes, Virginia, one of the worst-affected streets was named just that...) etc. subdivisions all the more unexplicable.

An early (Waitaha) name for the area was 'Waima-iri-iri' - the place of many waters, and the early Black Maps show watercourses throughout the central city that later turned out to be areas of particular vulnerability.

Both the Regional and City Councils have never really acknowledged their compiicity in waving through much of the newer Red Zone subdivisions.....given the by then well-understood geotechnical vulnerabilities.

Hugh P lays the blame on the 1989 swathe of amalgamations, which wiped out much intimate local knowledge, diverted attention to organisation-building instead of community safeguarding, and introduced a quasi-corporate ethos which glorified 'growth'.  The attendant surge in rates, staffing, empires, and organisational layers is something which has come to bite the current Council, which faces a $1.2 billion shortfall in funding, against a rates income of around the $370-450 million mark, and with its head up against a debt-funding ceiling.

Hindsight is always 20/20, but the sad conclusion is that the whole shebang lacked the back-bone, the balls, and the brains to have done something to mitigate the known hazards.

The one shining exception was the electrical-supply organisation, which promptly reinforced every single one of its substations, resulting in minimal damage to that infrastructure compared to (say) the three-waters administered by the Clueless Council.

So in the light of the above, one must ask, would things be much different now, even with a shiny new RMA???