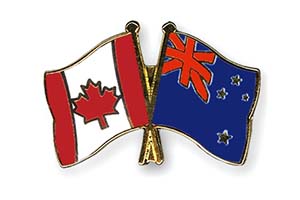 Chinese investors may be buying Auckland real estate, but most of the big investment into New Zealand is still coming from traditional markets.

According to a new KPMG report, 'Foreign Direct Investment in New Zealand: Trends and Insights', major investors from the US, Canada and Australia are collectively investing over three times more in New Zealand than those from China.

KPMG has drawn this conclusion by reviewing the applications the Overseas Investment Office (OIO) has approved between January 2013 and December 2014.

Investors have to get approval from the OIO if they want to acquire business assets worth more than $100 million, sensitive land, or a fishing quota.

Before cracking into the details, KPMG makes a few disclaimers. It notes not all OIO decisions necessarily proceed to settlement or result in investment, so the information can’t be interpreted as actual investment data.

Investment from Australia is also under-represented, as "certain" Australian investors only need to get OIO approval if they acquire over $477 million of assets, rather than $100 million, and the investment doesn't include any sensitive land or fishing quota. Thus the level of observed Australian investment is likely to be lower than what the reality may actually be.

KPMG was also unable to include about 8% of consideration values in its analysis due to confidentiality.

So where is the money being invested?

Investors from Canada and the US are largely putting their money into forestry, while those from Asia are investing in dairy and real estate.

KPMG says the US acquired the most land during this period – about 115,000 hectares. This was largely due to Rayonier Canterbury LLC acquiring an additional 74% holding in Matariki and Waimarie Forests.

KPMG says, “The land acquired over the last five years represents approximately 5% of New Zealand’s total agricultural and forestry land area. Some of these acquisitions are likely to be the consequence of an exchange of land between two overseas entities, rather than net investment.”

The largest transaction made in 2013-14 was made by Canada’s Public Sector Pension Investment Board, which bought a portfolio of 18 assets held in an AMP Capital Property Portfolio, for $1.1 billion. The Board also increased its investment in Kaingaroa Timberlands Limited.

Investors from the US invested $688 million in Heinz, $482 million in Crombie Lockwood, and $234 million in BOS International, to name a few.

KPMG says Canada and the US have made significant investments into forestry, which it cannot include in this analysis due to confidentiality.

KPMG points out that unlike a large portion of FDI, China’s investment into New Zealand in recent years has included the development of new assets.

Overseas investment in New Zealand continues to be broad based.

KPMG reports 17% of investment is going into the energy and power sector, 13% into real estate, 11% into agribusiness, 11% into materials, and 9% into healthcare, financials and consumer staples.

It says there hasn’t been too much movement in these sectors since 2011, however there’s been more interest in New Zealand’s healthcare sector.

“The most notable transaction in this sector is Switzerland based Zuellig Group’s acquisition of a 40% stake in EBOS Group Limited, with a total consideration of $658 million.”

Of the agribusiness sector, half of the investment dollars came from dairy and milk processing.

However it expects this investment to take a hit as global dairy prices dive. It notes this blow may be offset somewhat by speculative buying of farms if farm owners are forced to sell.

Investors from China and Hong Kong make up 49% of agribusiness investment.

The Labour Party is criticising the OIO for not collecting data that reveals what value investors are creating when they buy our productive land.

Its spokesperson on the OIO, Stuart Nash, says “It is not enough for the Government to simply report on the quantity of our land that is being sold offshore: investors are required to add value over and above what a Kiwi investor would, in the form of additional jobs and exports. But the OIO is failing to report on whether these promises are being kept.

“Since 2005, 716 investors were given the right to purchase sensitive land (5ha or more) and had to quantify what the additional value is that they would offer. But we have no idea whether these promises are being kept or whether the international investment is adding real value to our economy.

“Quality investments will add significant value in terms of high value employment, new skills, increased trade access and export receipts. Low value ones will add nothing to our economy and communities."

Although this study is better than nothing, it is very incomplete. No conclusion on foreign totals can be drawn from this report. The $100m OIO threshhold is one issue. No residential figures another.
One question: what happens if one overseas company buys the assets of another overseas company, is this still listed as "overseas investment in NZ" Or is it just not captured?

Were KPMG shoulder tapped by Joyce?
To settle things down on the voters perceptions of foreign purchasing.

another smoke screen by this government, what we want to know is total how much is coming in and where is it being spent

Actually, while the Government will use it as a smoke screen it is still very telling. Where is the money being invested? Land, an existing forest, residential housing. Not one new business is created no export dollars being created (over what was already there) just the end result of a river of money leaving the country, and the Government's past position is anything to go by, sweet FA tax being paid on any of it. Once again our governments (National and Labour, as I don't see Andrew Little offering any solutions beyond hot air) are giving away our sovereignty while feathering their own nests!

I've been advocating that New Zealand Land should only be sold to citizens. Doesn't matter who the 'non-citizens' are I will keep that up.
If I was to be racist. I do admit that the way Canadians say "about" (aboot) is quite unacceptable. (- joke warning for the literal minded)

The Canadians are the best of them (that's not saying much).

Can anyone see my tractor, I think I just lost it in one of the holes in the above report.
Headline should have been something like, "Canadains biggest foreign investors, after excluding 95% of stats as they didn't fit our preconceived requirements"

Canadians socially and culturally very similar to NZ and aren't out to own and control the parts of our markets they're interested in, keeping as much as one can to themselves, cutting out Kiwis.

'Investors have to get approval from the OIO if they want to acquire business assets worth more than $100 million, sensitive land, or a fishing quota.

I'd imagine for most people $300,000 or more to buy a home or land would be considered high value, so if a foreign entity or person buys in this may be considered a highly sensitive investment. Perhaps KPMG should think about that and attempt to provide a full picture by including total foreign investment, or not.

I'd be interested to know how many NZ'ers and NZ institutions own property and land outside NZ too, is there any data on this? It would be a tad hypocritical if we as New Zealanders are complaining about foreign investment here if we are doing the same thing to other countries overseas.

Owning assets overseas and not allowing overseas people to own land in your country is pretty much standard operating proceedure. It's the way the world works. The naivety of New Zealanders about how it actually works is a problem.

This illustrates that our fixation on the Chinese is inappropriate and off the mark. We need to stop the sale of our property to all foreign nationals. I see little, if any evidence where foreigners are doing anything with our property that we can't do our selves. I also suspect that a lot of the profits are shipped off shore without our receiving our fair share of the tax revenue.

My New Master will most likely be a Canadian. It is all ok then! Now I must scurry back to my hovel to see if I can find a potato to divide into next weeks' meals.

This report is hopelessly inadequate for the conclusions now being reached by vested parties. We don't have a problem after all - yeah right! F#%$$^&K

I don't see that much of what goes on and yet I have seen $300m of foreign transactions in the past 6 weeks that will not be recorded by OIO. They ranged from $11m for a development site to $80m for a commercial building.

The it perhaps your job as a concerned New Zealander to make sure the OIO does get informed. Whether or not they do anything about it is up to them.(History has a nasty habit of reminding people of their transgressions at the worst possible time!). Regardless, it's up to New Zealanders who do know what's going on to look out for those who don't.

Can Phil Tyford see how many Canadian sounding names are buying Auckland houses?

Completely apples and pears and classic diversion from the actual topic:
"Investors have to get approval from the OIO if they want to acquire business assets worth more than $100 million, sensitive land, or a fishing quota."
Excludes residential completely and if you think 100Mill + is all that exists and they do not purchase below that to avoid scrutiny then you either dishonest or dopey. This is BS of the finest order.

A truckload of Chinese cash is in Canada, and there has been for some time. Look at the recent press from Vancouver as an example. Consider for a moment this could be Chinese cash being redirected from Canada to NZ. The Chinese stat could be 35%....