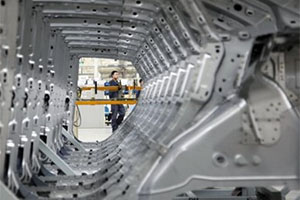 Since last November, economists and the media alike have been hailing supply-side structural reform as a groundbreaking solution to China’s economic woes. After all, the logic in China goes, demand-side policies, in the form of Keynesian stimulus measures, are useful only for resolving short-term and aggregate problems. Because China’s problems are long term and structural, the country should be focused on supply-side structural reform, even if it means accepting slower GDP growth. Is this the right approach?

GDP growth is generated via the interaction between the supply side and the demand side of the economy. For example, investment in human capital enables innovation, the products of which create demand and, in turn, economic growth. Demand-side policy and structural adjustment are not mutually exclusive. In aggregate terms, growth of supply determines growth potential, and growth of demand determines the use of that potential. To change the economic structure and growth pattern, first the structure of demand must be changed.

For China, the supply side should be driven more by innovation and creation, rather than by increasing inputs. On the demand side, it should be driven more by domestic consumption, rather than investment (especially in real estate) and exports. But this shift is proving difficult, as structural factors cause China’s long-term potential growth rate to fall; the economy now seems set to fall below even that lower rate this year.

All of this suggests that continued structural adjustment is needed in China. But the reality is that China has been engaged in such adjustment for a long time, with unsatisfactory results, indicating that complementary demand-side policies may be needed. Moreover, while slower growth is unavoidable because of adjustment, there is a limit to how low a growth rate China can accept. With China’s growth having already reached a 25-year low in 2015, that threshold may not be far off.

The fact is that China remains gripped by deflation, with prices and output in a downward spiral. Despite a slightly positive consumer price index (CPI), the producer price index (PPI) has been falling for 47 months in a row. Moreover, the GDP deflator has been negative since the beginning of 2015.

Two types of deflation spirals are currently at work in China. There is the overcapacity-deflation spiral, in which overcapacity pushes down PPI, leading to falling corporate profitability. Then there is the debt-deflation spiral, in which falling PPI causes real debt to rise, again weakening corporate profitability. In both cases, firms are driven to deleverage and reduce investment, a response that leads to more overcapacity and further declines in PPI. Furthermore, given that China’s corporate debt is already very high, the increase in real debt may have devastating consequences for financial stability.

Compounding the challenge confronting China is the fact that the economy’s major demand-side driver, real-estate investment, is declining more rapidly than the alternative source of demand, domestic consumption, is rising. In 2015, the unsold residential floor space for China as a whole was 700 million square meters (7.5 billion square feet), while the average annual sale of floor space in normal times was 1.3 billion square meters.

Faced with double-digit growth in inventory, real-estate developers slashed investment. By the end of 2015, real-estate investment growth dropped almost to zero. This year, though investment increased somewhat in January and February, that rate is almost certain to fall significantly further. Because real-estate investment accounts for more than 10% of China’s GDP, the impact of this trend on overall economic growth will be considerable.

In this context, China is not facing a choice between Keynesian stimulus or supply-side reform, but rather a challenge in balancing the two. In order to avoid a hard landing that would make structural adjustment extremely difficult to implement – not, it should be noted, to prop up growth – another stimulus package that increases aggregate demand through infrastructure investment is needed. Given that China’s fiscal position remains relatively strong, such a policy is entirely feasible.

The new stimulus package should be designed and implemented with much more care than the CN¥4 trillion ($586 billion) package that China introduced in 2008. With the right investments, China can improve its economic structure, while helping to eliminate overcapacity.

The key will be to finance projects mainly with government bonds, instead of bank credit. That way, China can avoid the kinds of asset bubbles that swelled in the last several years, when rapid credit growth failed to support the real economy.

To accommodate this approach, the People’s Bank of China should adjust monetary policy to lower government-bond yields. Specifically, it should shift the intermediate target of monetary policy from expanding the money supply to lowering the benchmark interest rate. Needless to say, in order to uphold monetary-policy independence, China has to remove the shackles from the renminbi exchange rate.

Structural adjustment remains absolutely critical to China’s future, and the country should be prepared to bear the pain of that process. But, under current circumstances, a one-dimensional policy approach will not work. Expansionary fiscal policy and accommodative monetary policy also have an important role to play in placing China on a more stable and sustainable growth path.

Yu Yongding, a former president of the China Society of World Economics and director of the Institute of World Economics and Politics at the Chinese Academy of Social Sciences, served on the Monetary Policy Committee of the People’s Bank of China from 2004 to 2006. Copyright: Project Syndicate, 2016, and published here with permission.

Great, more money to get "laundered" in NZ property.

and it will achieve what?

nothing by the looks of it...

Kicking the can a little further down the road, until it is no longer possible to kick the can down the road.